Haunting, Familiar Yet, Can’t Seem To Place It: Oilers 0 – Hawks 4 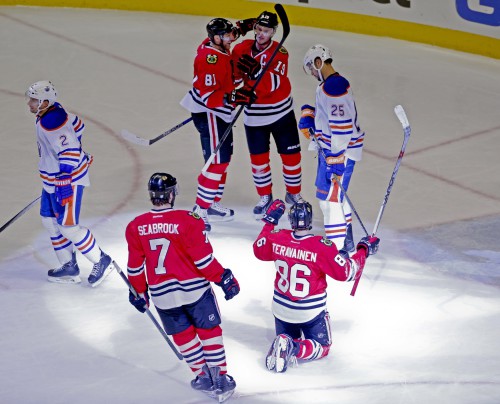 The top line. There it is. I knew it was around here somewhere.

The Hawks finally got an explosion from Hossa-Toews-Teravainen, and they were the difference in what was otherwise a pretty even contest. Both goalies played well, though Talbot eventually blinked and Crawford didn’t. The Hawks didn’t even need a power play goal this time, getting all four at evens to skip away from an interesting yet deeply flawed (and deeply depleted) Oilers team. With the wonky Sabres and Sharks next, the Hawks certainly have a chance to wash away the taste of yet another loss to the Avs in a hurry.

No reason to wait around, let’s get to it.

-This is what it looks like when the Hawks top defensive pair doesn’t get hemmed in as it’s done far too often this season. Hjalmarsson and Seabrook were sent out against Taylor Hall, and kept the Oilers top line so quiet Todd McLellan switched up RNH and Draisaitl to try and get things going. Seabrook and Hammer were the best possession players on the night, and that means Seabrook has a better chance to use his passing to break the Hawks out which gives them another outlet besides Keith.

-Which is good, because that Scuderi-Rozie pairing isn’t breaking the Hawks anywhere anytime. Hopefully the Hawks make a trade to upgrade the defense soon, because none of you deserve to watch Scuderi for too much longer.

-For the first time in three games the Toews line was able to turn over Draisaitl and Hall, creating 10 shots between the three of them and seven scoring chances. They caught a break in the 1st when Justin Schultz did Justin Schultz things, leaving Hossa and Toews open for a 2-on-1 when he didn’t really pinch nor back up. That’s too much space for Teuvo to pick apart, which he did. Full credit to Toews for his shot, because the pass from Hossa wasn’t exactly snappy and there wasn’t much room with Talbot sliding over. He still found the corner.

-Darnell Nurse is going to be a real thing one day, but right now he’s not the kind who should be regularly taking on Hossa and Toews in the corners. Lesson learned, kid.

-But at least it afforded us the opportunity of seeing Hossa run over Teuvo, which we’ll all be laughing about for a while.

-Pretty ho-hum game for the SuperPAK line until the contest was decided and Panarin caught the Oilers on a bad change. Normally this season that’s meant a Hawks loss. Encouraging that it didn’t prevent a ho-hum win tonight.

-Michal Rozsival on the power play will never cease to be funny.

-When the Hawks got into any trouble tonight, it was when their forwards got caught too deep trying to help the defense and the Oilers defense was able to sit on the blue line as we’ve seen other teams do. Once Seabrook and Hammer showed they didn’t need the constant assistance, the breakouts were much cleaner.

-That’s five shutouts, a career high already for Crawford, who looks as spry in the net as we’ve ever seen him. It almost looks effortless to him right now, and even when Crow was good in the past I don’t know that it’s ever looked as easy to him as it does right now. His GAA and SV% are now top ten in the league. While Kane takes all the plaudits, Crow is at least as big of a reason the Hawks are entrenched in a playoff spot given the past couple weeks. And if the second line is going to cool off a bit, he’ll be even more important.

Not much else to report. A comfortable, nondescript win. There haven’t been that many of these.