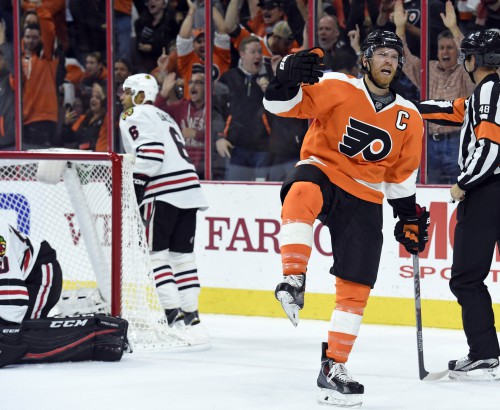 In an opening week that has seen the Kings get absolutely rolled by the Sharks, Coyotes, and Canucks and see the Sharks roll through DC, it’s best to not make too much of  a 2-2 start. Throw in the fact that the last time the Hawks won a regular season game in Philadelphia, the Chili Peppers were on tour supporting One Hot Minute and Dave Navarro was the guitarist. Fuck, Dave Navarro was doing anything! It’s a testament to generally how focused the Hawks are to starting their season well that these sort of clunkers are a rarity in the season’s opening throes. But that’s what it was tonight for sure, where the Hawks were pretty much in “Eh, you fucking do it,” mode for the first two periods and found Michael Neuvirth up to their 3rd period rally. Obviously wouldn’t be complete if the Hawks didn’t fuck their own face on a 3rd period power play that could have gotten them back into the game. So let’s get to it all:

-There isn’t really anyway to sugarcoat this, but through four games Jonathan Toews has basically been butt. He’s the Hawks worst possession player, only slightly ahead of Hossa. It was John Tavares who kicked him all over the ice the past weekend, and tonight Sean Couturier did Sean Couturier things. His specialty is swallowing opposing star centers whole, and that’s why he just cashed a very handsome check. If it were a four game streak in January you probably wouldn’t notice, and it’s not anything to worry about now. But it’s at least worth keeping an eye on.

-So that 5-on-3. If I asked you how it went and you didn’t see it, you could probably tell me exactly what happened. Keith and Hossa, both lefty shots, are at the points and basically play catch. There’s one attempt at Kane trying to hit… well anything on a cross-ice pass from the goal line, that doesn’t work. Over. Because of the two lefties up top, the lone Flyer forward just basically sat on Hossa, knowing Keith would have to turn to shoot or make any other pass than to Hossa. That would give them time to react. If this is the formation the Hawks are hellbent on (and it shouldn’t be), Keith and Hossa have to back up, giving Keith more room to just walk between the circles and force some decisions from the killers. But with Panarin and Seabrook having good shots and right-handed, I don’t know why this is the preferred method.

-On normal power plays, Artemi Panarin has all the movement Patrick Sharp basically gave up on his last couple years here while he waited at the left circle for someone to hit his tape. Panarin will post up there, and got one chance on a Kane feed. But he’ll also circle down to the high slot and then to the low slot and back, constantly seeking space. It makes the Hawks’ PP look a little more dynamic.

-Viktor Tikhonov went from scratched in favor of #WorkingClassHero Kyle Baun to on the top line in the span of four games. Such is Q trying to figure out how all these pieces fit. Tikhonov played well enough that he should earn a longer look there. Garbutt just isn’t a fit, Shaw isn’t either, and Teuvo needs to be centering the third line.

But once you start moving these pieces, you’ll find in Rubix cube like fashion they don’t all work. If Tikhonov is on the top line, you have Teuvo centering CatButt and Bickell, which is a waste. Is Shaw in on the top line that unit is off.  Teuvo up there puts Shaw back at center. Basically, the Hawks need Marko Dano to light up the AHL and earn his way back up.

-If this were last year, Viktor Svedberg would probably already be on his way back to Rockford, just like Clendening, Dahlbeck, Paliotta and whoever else were punted after brief auditions. If the Hawks show patience this time at least it’ll show a change in approach, or it might just show they don’t think they have any alternatives. But I can’t really decipher what it is they think about Svedberg’s game that will blossom.

-I didn’t really notice Trevor Daley at all. On one side of the ice that’s good. On the other… not so much.

-TVR has looked a little better each game.

-The Hawks were let down by a couple vets on the blue line though. For the second goal, Seabrook abandoned the front of the net and didn’t block a pass to only Claude Giroux. On the third Hammer kinda fell asleep on a rebound and let Matt Read right around him to deposit.

-But of course, it’s all Crawford’s fault, duh.

-A word on Kane’s treatment by the Philly fans, which we should all get used to. While I suppose it’s a smidge or smudge or smidgen better than outright indifference, I won’t pretend that the crowd was acting as some rape victim advocate. The reaction and chants would have been the same if Kane had gotten caught urinating in public (and how has that not happened in eight years?). It’s just ammo to taunt an opposing player and feeds sports tribalism. Not championing a higher cause. Especially when it’s in front of the garbage that populates Philly arenas and stadiums.