Go Ahead and Give It to Me: Blues 3, Blackhawks 2 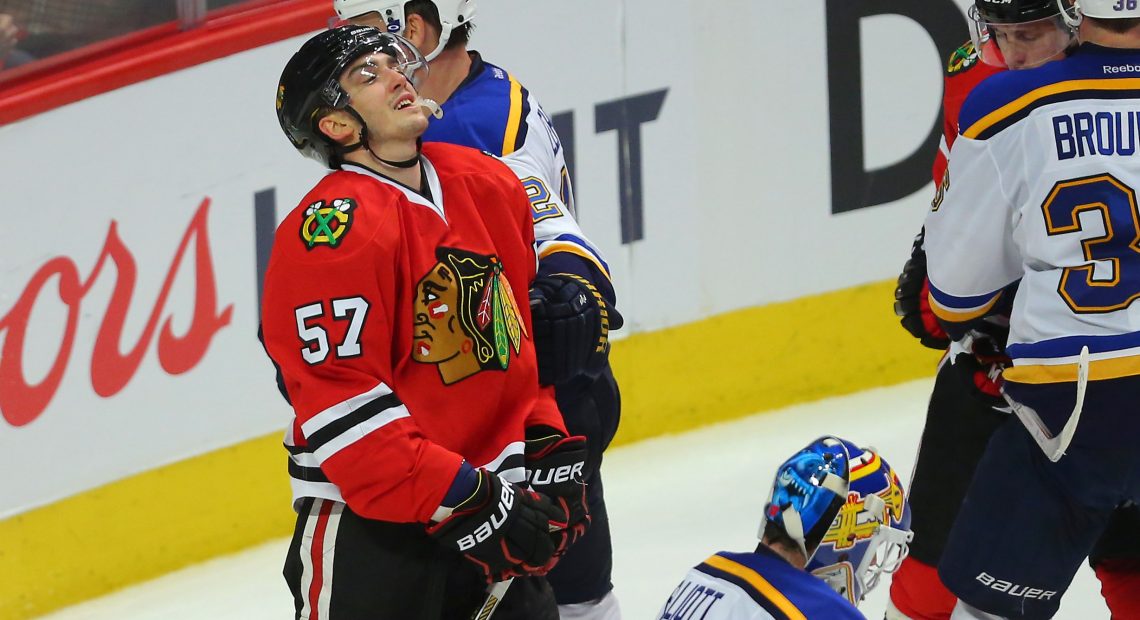 Today’s loss would probably fall under bad luck more than anything else.

The Hawks threw 46 shots on net including a second period where they peppered Brian Elliott to the tune of 24 shots on net. Unfortunately, they only had a one goal lead to show for it.

Even though the Hawks played well enough in the third period, only having a one goal lead opened the door for something goofy to swing the momentum. So when Patrick Berglund flung a seemingly harmless shot from 55 feet away, it redirected twice; once off Michal Rozsival’s shinpad and then skimmed off the ice while taking a bee-line to the top corner, that was exactly the type of break St. Louis needed.

Add in a Patrick Kane double minor penalty with under ten minutes left to play that was only slightly less worse than Vladimir Tarasenko’s in Game 2 and the door was wide open for the Blues to walk away with a 2-1 series lead.

–The other troubling part of today’s game was the Blues out-possessing the Hawks in 5-on-5 play. The Blues top line of Tarasenko-Schwartz-Lethera essentially had their way with the Hawks. This would be a bad trend moving forward.

Teuvo’s line started the game matched up against them and that changed very quickly as the Hawks were buried in their own end for the majority of their first two shifts. Then it was a hodgepodge of lines tasked with trying to defend against them. Finding one line that can at least stop the bleeding against them would go a long way towards winning Game 4 and eventually the series because the Blues don’t have much forward depth elsewhere. I don’t think relying on trick shots from

On the flip side, the Hawks’ best forwards need to find the score sheet more than once a game. That’s why no one should be terribly shocked if the lines look somewhat different for Game 4.

The formula for success is not too difficult; the execution might be.

–The Blues got one goal doing their backdoor slot pass on the power play. That cannot happen again this series. The Hawks have to recognize that the Blues trigger man on the goal line has no other play other than a pass back to the point or the slot, particularly the way Backes sets up. He’s leaning back and isn’t quick or agile enough to drive the puck towards the crease.

The Blues first power play goal…I don’t know how many people are going to stop that shot when it is that perfectly placed. Winning a draw could help.

–I’m still not sure how Ladd’s post to post shot didn’t go in. One thing that the Hawks could stand to learn from it is they have to get Elliott moving side-to-side. He’s not the quickest at going post to post and there are plenty of openings to shoot at when he does.

The problem they’ve run into is that there are often times a massive Blues defenseman also standing in the shooting lane.

–Unlikes a herpes infection, the best treatment for Steve Ott is to simply ignore him. He played 6 minutes. He is irrelevant to the outcome. There is perhaps no better definition of the Blues/Ott experience than Ott looking to make a check while he’s possessing the puck as he did in the second period today.

—Beating the Blackhawks Formula Update: After three games, the Blues are outpossessing the Hawks by more than 55% and are getting “goalied” really hard with Elliott’s 96.3% save percentage. This isn’t the first time the Hawks have seen a goalie put together three solid games against them. You only have to look back at last year’s Western Conference with Frederick Andersson. At some point, Elliott will turn into a pumpkin. For the Hawks, they just have to hope it happens in this series and not the next round.