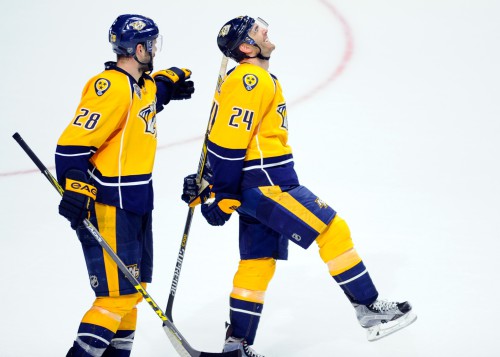 Sorry for the delayed wrap. Because both the Hawks and Jets played last night and then again tonight, I had to get to work on the program for today pretty immediately after the game and everyone else had commitments. Not that I can add much to that full body dry heave the Hawks put forth last night.

While the broadcast tried to bend over backwards to claim the 3rd period was somehow redeemable in that the Hawks threatened a team sitting on a three-goal lead and then a two-goal lead which became a three-goal lead again, nothing will make up for the complete no-show that was the 1st. And fans and teams can dismiss it as just a bad day at the office, but it’s not like the Hawks haven’t made this a habit this season. They have been simply overrun in periods quite regularly. Off the top of my head, by Minnesota, by Ottawa, by Anaheim, arguably L.A., certainly in Edmonton and Calgary, and that’s basically just in the past month. It’s no secret how, and it started on the first shift last night. Get the puck behind TVR and Seabrook, pressure them, and they’re going to have an awfully hard time getting out. Same story for the third pairing. And when any line but SuperPAK isn’t starting in the offensive zone, they aren’t creating much. Any decent coach can figure this out.

And that happened last night, and Scott Darling couldn’t quite come up with the miracles that Corey Crawford did on Tuesday, when the Hawks easily could have given up four or five as well. No team has stretched them as easily as the Preds have now done twice. And the second time, Rinne could actually stop something. That’s how you get an L.

Anyway, let’s get to the bullets.

-Teuvo didn’t score, so he must suck again. He had a really bad turnover that led to Neal’s first goal, which I’m sure the broadcast will be harping on for weeks. At first I wondered if the constant berating of Teuvo was to prepare the ground for a trade. Now I wonder if it isn’t cover to distract people from noticing that it was yet another night that Toews did absolutely jack and shit. Toews has one assist in seven games. He has seven points at even-strength this season. He was underwater in possession when adjusted for the score. I keep writing this, and nothing seems to change. We’re over a third of the way into the season. When should fans really start to worry?

-When Andrew Shaw, who had a very good game, is your most noticeable forward, you have a high likelihood of losing.

-When Hammer looks like TVR on the night, you have a high likelihood of losing.

-While Kane extended his streak, which seems to be the main goal of the broadcast these days, his line went a combined -7 and were basically kicked around possession wise, especially by the Preds 3rd pairing of Ekholm and Ellis who just pushed them the other way easily. Anisimov was once again anemic at the dot and usually that doesn’t matter, but against a team like the Predators who make it very hard to get the puck back, it kind of does.

-The Hawks move to 6-5-0 when they don’t score a power play goal, which is actually better than I thought they would be. But right at .500 lets you know how below their usual they’ve been at even-strength this year.

And that about sums it up. Onwards.