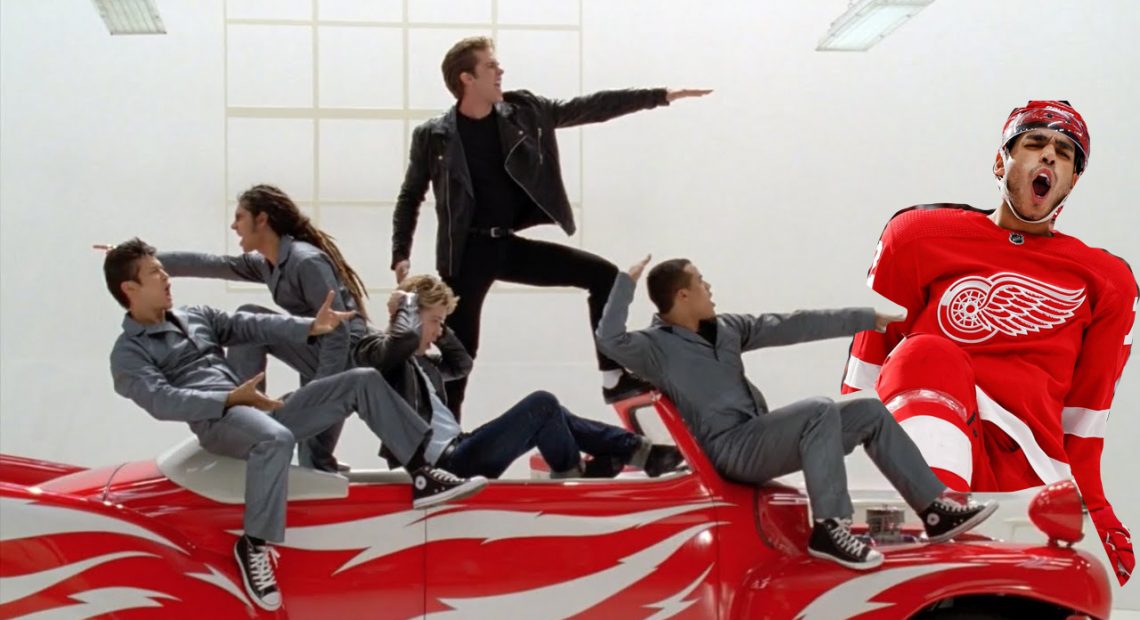 When news broke on deadline day that Andreas Athanasiou had finally been traded from Detroit, our hearts sank a little. We had dreamed of Athanasiou on Madison, if only for the localized Cheap Trick jokes. In earnest, Athanasiou is the kind of player the Hawks paid lip service to trying to get and find and develop a couple years ago, but never did. The Hawks aren’t fast enough, they only acquire or produce players that aren’t fast enough, and Athanasiou is the kind of speed they need to find more of. We especially were hurt by the seemingly light price-tag that Athanasiou cost the Oilers. Sam Gagner is merely a collection of organs now, and two second-rounders is not nothing but it’s hardly a chest full of gold either. Especially as the Oilers picks will be in the back half of the round, at least this year.

And because it happened in Detroit last year, which is now hockey’s tree-falling-in-the-forest, most don’t remember that Athanasiou went for 30 goals and 54 points last year while mostly playing with the charred ends of Frans Nielsen and Luke Glendening. How could he only be worth two seconds and a youth-coach-in-waiting?

It also seemed curious that Ken Holland is the one who came in for Athanasiou, as it felt like he was leading the charge of under-appreciation for him. It was Holland who stonewalled the player as a restricted free agent in 2017, nearly sending him to Europe and not signing him until three weeks into that season. But then it was Holland who didn’t make that mistake twice, handing him the contract he has now that expires after this season immediately. Maybe Holland has come around.

Still, if you wanted to, you could make the argument that Athanasiou is a glorified Tony Salmaleinen. Because that 30-goal campaign looks a long way off this season.

Athanasiou has only put up 11 goals this term, though playing most of his time in Detroit with yet another cadaver in Valttieri Filppula didn’t help matters. But all of Athansiou’s metrics are way down. He shot 13% last year, but it is just 8.,7 so far this season. His career mark is 12.7%, so this could be unlucky.

But his individual expected goals are down. So are his attempts. So are his scoring chances. And shots. He used to pile up over nine shots per 60 minutes. This year it’s below eight. He’s scoring a touch below what he “should” be, according to his ixG, but hardly enough to consider him hard done by.

Even upon arrival in Edmonton, he wasn’t immediately put in the top six where one would assume he would go. He’s behind Tyler Ennis, for christ’s sake. He’s got a chance to make an impact in the playoffs for the first time, and maybe playing against third pairings will give him the chance to really open things up.

It might be his last chance at a raise. Athanasiou is still a restricted free agent after this year. But he can earn another bridge deal before heading to free agency. It’s clear Holland wants a clear look here in a new place.

Because it feels like Athanasiou should be more than this. That could be simply because his prime skill, his speed, is so easy to notice by anyone. It can look like he’s having more of an effect than he is. Still, at some point he’s going to get a look with Draisaitl or McDavid, for the first time with a prime center, and we’ll find out just what he could be. If Zack Kassian can pile up 15 goals riding shotgun, and he can’t move or think or talk, what could someone with these gifts do?