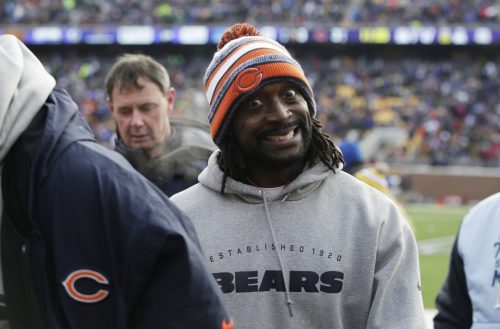 Tillman was part of a rising defense in Lovie Smith’s first three years, where it actually felt like for once the Bears might be on to something. Then Peyton Manning and the Colts averaged nine yards per play in Miami, sprinkle in some Rex-Cannon, and it all kind of broke. But Tillman remained along with Urlacher and Lance (who was better than Urlacher but I’ll whisper that for now) and that troika at least made the defense respectable most times, huffing and puffing the Bears to 7-9 wins whether they needed them or not. Not that it mattered much, given the incompetence on the other side of the ball.

It was funny, the first thing people in the game liked to say about Peanut was that he wasn’t a great cover corner and was built for the zone-heavy Cover 2 Lovie preferred. And yet whenever they needed it, it sure seemed like Peanut put Moss, or Megatron, or any other big time receiver in his pocket and never let him out. Maybe he wasn’t asked to do it as much as other corners, but it sure seemed like when he was he always came through (except for maybe Jordy Nelson, but he’s a cheat code anyway).

But of course Tillman’s overwhelming contribution wasn’t just forcing fumbles, but forcing them when the Bears had to have them. I remember in 2007, when it was already obvious the post-Super Bowl season was going to be pretty much mush, the Bears headed to Lambeau Field for a Sunday night game. My friend in LA who I always watched Bears games with then were sure they were going to get shredded and basically end the season before Halloween. Tillman gave James Jones several complexes that night, punching the ball out twice to give the Bears a win they scarcely deserved and keep the season afloat a little longer. Jones pretty much wet himself at the sight of Tillman every game after that. It felt like Tillman did that for an entire decade, getting the one turnover that kept everything from breaking down.

It was hardly Tillman’s fault that the Bears couldn’t live up to his standard, and he seemed to get better as he got older. There was the unfathomable 10 forced fumbles in 2012 for a 10-6 Bears team that still didn’t make the playoffs. That cost Lovie his job, though Peanut was the first to sniff out that Marc Trestman didn’t have any idea what he was doing. Maybe we should have listened to him. That 2012 season was the only one where Peanut earned an All-Pro honor, which seems wrong too. It had to be more, didn’t it?

Urlacher and Briggs always got a little more pub than Tillman did, mostly because Tillman’s skillset was, or at least thought to be, so out of line with the position. Tillman was a great tackler and forced fumbles, even though he could cover like a blanket when asked and pick off passes too. He just did everything right, and until the end was always dependable, never missing more than two games in a season. And you sure noticed when he wasn’t there.

Our heart broke in 2013 when he tore his triceps and missed half the season. Our hearts shredded when he did it again in the second game of 2014 as he cried on the sidelines, all of us knowing his season and Bears career was over. This was no way for it to come to an end. But I guess football is that way.

You always hesitate to label a pro athlete a good guy, not knowing what could be around the corner. But you feel safe doing that with Peanut, given his charity work, the stories everyone tells about him, the way he’s dealt with fans and press alike. It seems everyone who has come in contact with him has called it an honor to do so.

And oh yeah, he’s the coolest name I ever sold a program to outside the United Center, where you could find him frequently. So I’m a little biased. I seriously considered never washing the hand that got a fist-bump from him.

There probably won’t be another one like him, and I doubt I’ll ever warm up to a Bear in the same way. Happy trails, Peanut. You deserved so much more from the team you played for. We fans could have never asked for more from you.