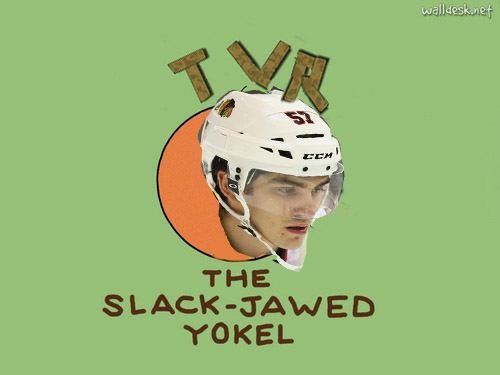 The trouble with games in the middle of January, especially when the All-Star break is becoming clear in the distance and you know a lot of these guys are dreaming about beaches, drinks with little umbrellas in them, and whatever else, is that you’re not going to learn much. We know the Hawks are a flawed, good team. We know that they’re giving up chances at a rate that we haven’t seen, and we know they need their goalies to bail them out consistently. We also know there are some nights they just don’t give a shit. They’ll take what’s on offer if it’s there, but if things get away from them they’ll probably just shrug it off because it’s not the priority. You got all of it tonight.

Oh, and they also keep sending out a large collection of toe jam on their blue line that’s going to cost them a goal or two every night.

To pin this loss all on TVR is too easy, and wouldn’t be correct anyway. But he didn’t help much.

So what turned out to be the winner. There are a few culprits, but he remains the biggest. Anisimov stopped skating when Killorn dropped the puck off to a curling Johnson, though that might have been because TVR was running a screen on him that Fred Hoiberg hasn’t been able to figure out for the Bulls yet. Or he wouldn’t have been in that position had TVR been where he was supposed to be and kept Killorn to the outside instead of facing the wrong way, and then when he pivoted to face up ice gave up the whole middle for Killorn. Certainly Brian Campbell had no idea he was going to have to get around TVR to cover Johnson, who is too fast to catch up to anyway from that position. And none of it would have started if TVR’s position as the puck was coming up the ice wasn’t completely on the wrong half of the ice.

Oh, but he wasn’t done. Not a minute later, Killorn is going around the net. I can’t fathom how many times we have to say it, probably until the words no longer have meaning, but the first thing the Hawks stress for their d-men is stick positioning. TVR had his stick attempting to block a pass back up the boards to the point, which is the retreating winger’s problem and not his. The one thing he needs to do is make sure a pass can’t get to the middle. Sure, it was a really nifty pass from Killorn, but a d-man with anything resembling instincts would have known it was a possibility. Ok, Panik shouldn’t get beat to the net, but this isn’t a problem if TVR cuts off that pass. Do that as Killorn curls around in the corner and you’ve forced him back to the outside, heading back to the point. He’s far less dangerous that way.

But we’re going to keep screaming this until our larynx fractures, aren’t we?

Let’s clean up the rest:

-Duncan Keith wasn’t any better. Sure, Boyle knocked him on his ass after he attempted to keep a bouncing puck in the zone. That left a huge alley for Boyle up the ice. But Keith should be fast enough to get back and at least keep Boyle on his backhand. Maybe he was worried about a trip or a hook, but both he and Hammer kind of just glided and stared and Boyle was allowed the alley to bring it back to his forehand which Crow was assuming one of them would cut off.

On nights where Keith is carrying  a 40% share, the Hawks are going to struggle. This is simple.

-Where the fuck did Brian Boyle find that Eric Lindros impression all night, anyway?

-Toews looked a little more spring-y, and had another two points, but also got his head handed to him in possession by the aforementioned Boston totem-doofus Boyle.

-The Triplets basically got what they wanted all night, and they were really the only line that should have been watched out for. Again, this has been an issue.

-Michal Kempny played 10 minutes. If he does anything TVR did in the 3rd, Q would have leapt off the bench and calf-roped him on the ice.

-The Wild won in a shootout, giving them a two point lead with three games in hand. The Hawks go to St. Paul twice in two weeks after the break. We’ll know how this race goes after that.