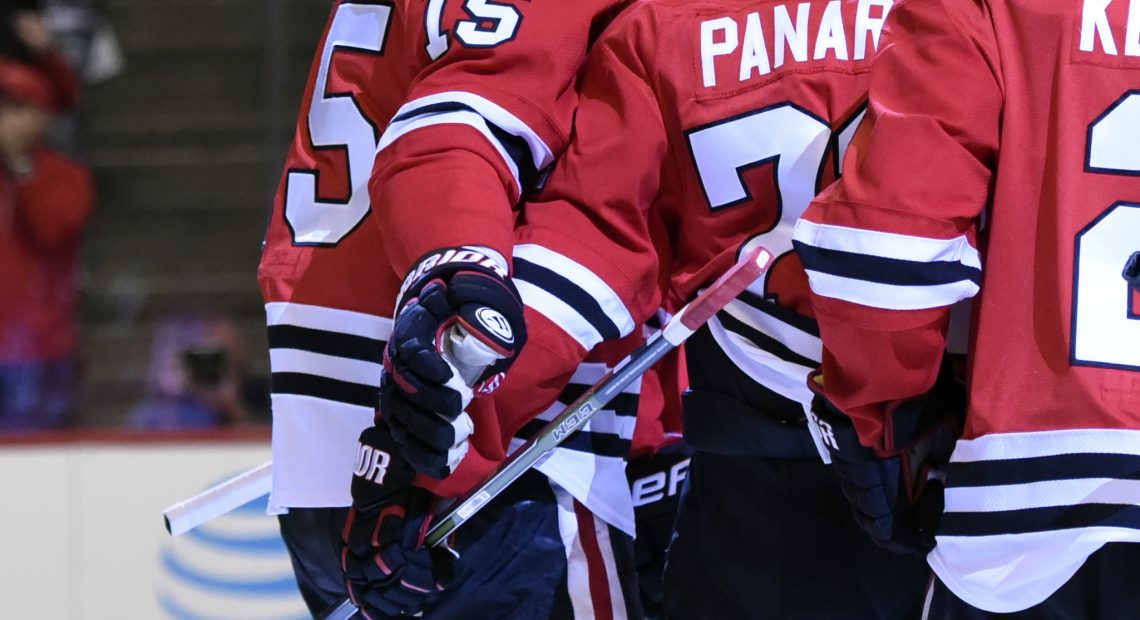 Let’s start this off with a cliche, shall we? The NHL regular season is a marathon. There will be ups and downs and by 82 games, the correct teams will be properly slotted in the standings. The majority of the games will feel like a blur and are totally forgettable. Some are a little memorable.

Last night’s may be filed in the category of memorable – at least in regards to the last two minutes of regulation.

The Blackhawks were well on their way to dropping the second of a back-to-back to Toronto after losing on Friday in Columbus. In five months, Columbus and Toronto may be fighting for their playoff lives and this won’t look as bad as we think now. But in the present, losing all four points in a seemingly soft part of the schedule would have been less than ideal.

Scott Darling, for all intents and purposes, appeared to be Cub drunk the majority of the night. He started the sequence on a back-breaking goal with less than 30 seconds in the opening frame by wanting to pass the puck to Gustav Forsling, then realizing someone was right on his back and then sort of just pushed the puck off his blade allowing the Maple Leafs to easily scoop the puck and regain possession.

And that was one of a few giveaways LOCAL GUY Scott Darling allowed during the course of the game.

The Leafs appeared to take the lead for good with 15 minutes in the third when Auston Matthews spear-headed a 3 on 2 rush with Marian Hossa ferociously back-checking. Matthews was able to fend off Hossa, fire a shot off Darling’s pad and William Nylander was right there to deposit his second goal of the game.

The Blackhawks responded with a carbon copy goal of their own. Minus the hellacious back-checking of a Marian Hossa, of course. Brian Campbell walked the puck in the zone and fired a shot off Frederik Anderson’s pad. The rebound shot right out to Artem Anisimov and he scored his second of the game.

A minute later, the game was tied as Rick TochettPanik does what he does – shooting the puck into the empty net from three feet out.

The play would have never happened if Duncan Keith wasn’t able to hold the line and keep the puck in the offensive zone. The Leafs would have gone the other way for a 3 on 0 easy empty net finish. Instead, the puck stayed in the zone and found its way on TochettPanik’s stick.

–As Sam mentioned yesterday via McClure, I implore you to watch how good the Blackhawks defense is at holding the blue line in the offensive zone and their ability to make plays after keeping the puck in the zone. It’s already paid off with two points against Toronto. It should’ve done the same in Columbus.

Now that we’ve brought this to your attention, it’s something you will never not notice now. Sort of like how I only notice the faces of the extras at the beginning of Army of Darkness before Ash gets thrown into the pit.

–Brian Campbell was feeling particularly spry last night. Partnered with Duncan Keith, the two combined for a +31 Corsi and were giving the Maple Leafs all they could handle on the offensive end. Not sure if this is a defensive pairing built to last through the gauntlets of May and June, but it looks good to me right now.

–If Marian Hossa’s lower body injury was nagging him, I’m sure slamming into the boards at full speed on Nylander’s second goal didn’t help matters.

–This game will definitely help ease the patience of the Blackhawk powers that be. If they’re as itchy as the privileged fanbase currently is, losing two straight games to Eastern Conference speed bumps may have sent them scrambling to the depth chart to rosterbate to their heart’s content.

We can observe how many positives to take away from each game but if it doesn’t result in two points, there are going to be ruffles in the feathers (if you will). This game should serve as evidence that A) there is a lot to build from and B) this team may be pretty damn good if they can weather the storm of the opening couple months while everyone gets accumulated.

You don’t need to look very far to find teams that scuffle out of the gate only to be playing their best hockey in the summer. Nashville was left for dead after 40 games last year only to be one win away from the conference final. It’s an annual rite of tradition for Minnesota to underachieve through the first three months before turning it around.

It may not be what we’re used to but it’ll keep things interesting.