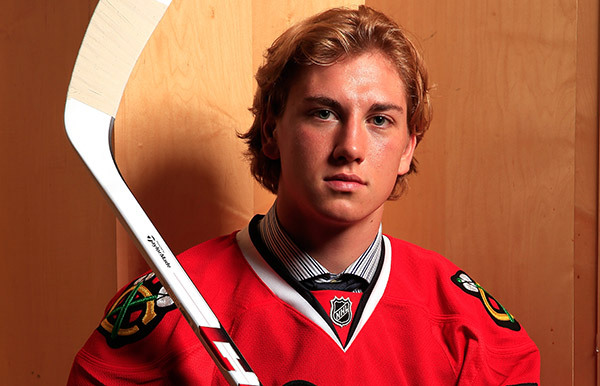 Sometimes I wonder how much the Hawks were scarred by having Kevin Hayes spurn their advances and head to free agency after completing his college career. They’ve certainly never let that happen again, though I don’t know how much of a threat that was with any of their college prospects. There were some whispers that John Hayden was looking longingly at the open market, so the Hawks signed him up last night. And they did it by promising he could get int eh lineup this season, thus burning one of the two years on his ELC and getting him to a second contract that much quicker. Because that went so well for Kyle Baun Baun Kyle Baun Baun, Drew LeBlaahhhhh, and all the other jokers the Hawks have punted into a game from the college ranks at the end of a season.

Hayden ties for 12th in scoring in the ECAC this season, and if that sounds familiar it’s because we kind of went through this rigamarole with Jimmy Vesey in the summer. He was also a senior who dominated the ECAC, causing a stir, and he signed for the Rangers and once his shooting-percentage became anything normal he’s basically sucked. Unless you’re impressed with four points in the past six weeks.

Hayden is a big boy, which will play in the league hopefully, except there are doubts about his skating which would negate that size. After all, size doesn’t matter if you can’t get there to make it matter. But really, any player who takes all four years in college should have any expectations for them tempered. College hockey is basically like basketball. If you’re anything special, your ass it out of there in a year or two. Unless you go to Minnesota where they hypnotize those kids into staying for all four years or they’ll treat you as Benedict Arnold.

While Quinnipiac and Union have made noise in the NCAA tournament before, the ECAC isn’t the best conference around so being the 12th leading scorer when  you’re more physically developed than most of your competition isn’t going to be getting a breeze going between anyone’s legs. I would expect Hayden to get a handful of games with the Hawks, maybe not even until that last stretch out West, depending on how the division race shakes out. And then he’ll be a Black Ace, come into camp next season, everyone will rave about how good he looks, he’ll start with the big team and hardly be noticeable, and then back to Rockford to work on things. We’ve seen it before.

The Hawks also signed Anthony Louis out of Miami, and it’s basically the same thing. Except he’s small, so it’s the opposite there. Louis was the third-leading scorer in the NCHC during his senior year as well. According to scouts, Louis is either going to be on your top six or he isn’t going to play at all. Even with the Hawks 3+1 model they like to rock at times, Louis is going to struggle to find his role, especially next year when DeBrincat is taking his cracks at making the big roster. Still, with Rockford as bad as they were this year, getting them some more talent next year can only help the real pieces that will reside there.