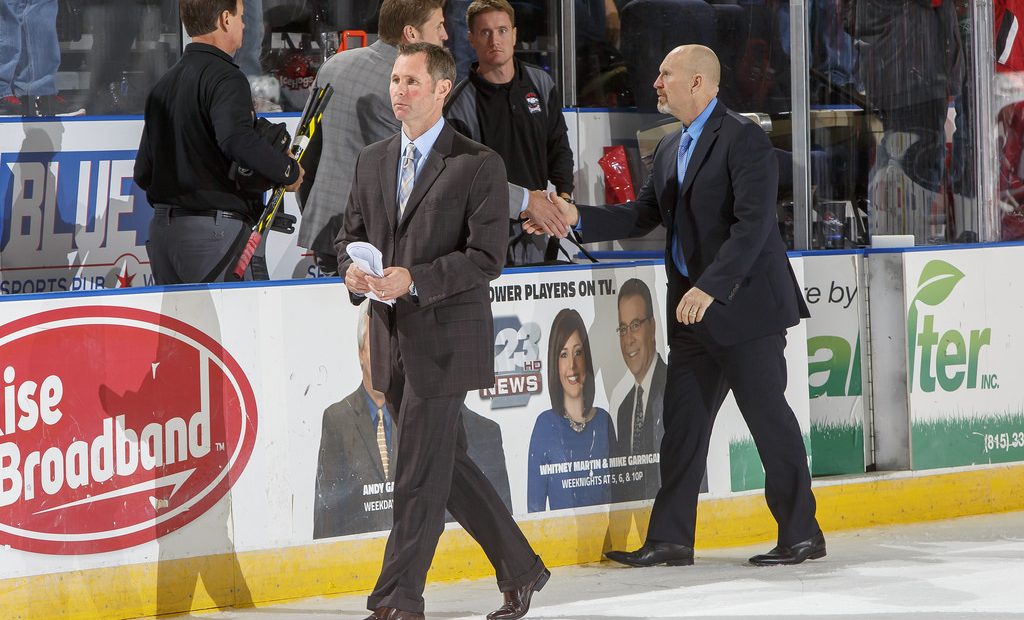 Just last night, I was firing off tweets as to the future of Ted Dent, who just finished off his sixth season as the head coach of the Rockford IceHogs. With Mike Kitchen being given his walking papers Monday, I figured Dent, who spent eleven years in the organization, could conceivably be in line to move into a spot on the Blackhawks bench.

Hawks GM Stan Bowman gave Dent his walking papers this morning in the latest move of what looks to be a thorough housecleaning. The move surprised me more than it did others; I stated just yesterday that I thought Dent had the players playing hard as the season wound down. I am sticking to that statement based on what I saw down the stretch.

That said, it looks like the writing was on the wall for a move to be made.

I hadn’t heard the tales of troubles in the locker room, though I have no reason to doubt the words of those in the know. Chris Hine of the Tribune cited some venting Dent did via social media and a text to his players that basically cried out “Don’t blame me, I just work here.”

Most of that frustration was from Bowman moving Rockford’s top three scorers at the trade deadline. This came at a time when the Hogs were starting to show some signs of improvement in what long before had become a lost season.

It’s hardly inside knowledge that Chicago management has called the shots in terms of the IceHogs. Rockford employs the same systems as the parent club, which makes sense. Dent has apparently bristled on occasion at the tinkering from above with his lineup card over the years. It seems as if things boiled over and now Dent is looking for another job.

Now, it’s completely understandable that Bowman fire a longtime coach (especially if he wasn’t fan of the rants that coach sent out on twitter) to try and flush out the staleness of an extended tenure. If locker room chemistry is an issue, maybe a change does everyone good.

If you’d like to get some new blood in the mix, now’s the time. With a plethora of new faces ready to begin their pro careers in Rockford, it might be a time for a cool change.

Dent did a more than capable job moving prospects through the system. He had a bit of a reputation around the AHL as a guy who sent players into a game for some extra orneriness, especially when his teams were down. Perhaps his most famous of these moves was sending Kyle Beach to take a center-ice faceoff with the Hogs down 6-3 to Grand Rapids, starting the Pink In The Rink Donnybrook back in 2013.

I always chuckled to myself when fans in my section would complain about Dent’s moves. The gripes should have been aimed up in the press box, at least on the night’s Bowman was in attendance.

As I said just yesterday, I can’t blame Bowman for doing his job and running the organization. One thing about his comments to the Tribune did make me raise an eyebrow:

“I think it’s true that’s a good training ground,” Bowman said. “The American League is also for players to get opportunities to succeed and fail that they might not get at this level. We want to be better there as well. There’s no doubt we’re not happy with the fact our team didn’t make the playoffs. We have to find ways up and down our organization to be better.”

If Bowman’s reasons for letting Dent go lay in not working and playing well with others, I find it hard to register a beef. However, to suggest that Dent’s hitting the bricks because he couldn’t win with the lack of speed and skill at forward that Bowman assembled for him…I respectfully disagree.

This past crop of Hogs was not a playoff team. I suspected this before opening night and it became painfully evident within a few games (yes, even when Rockford was 4-2 the first two weeks). If Bowman wants a playoff contender, fortify those prospects with some proven AHL lamp-lighters this fall.

Regardless of the justification, Dent’s exit raises endless possibilities, both on the Rockford staff as well as which players return for another go at the BMO. There were a lot of question marks after the massive egg the Hogs laid this past season. Today’s move gives the snow globe that is Rockford’s roster another couple of shakes…fer sure.

Does Bowman have Dent’s successor in his back pocket? Are other heads going to be carried out on pikes? Guess we’ll see in the coming weeks. I’ll post next week to mull the future of this year’s roster.