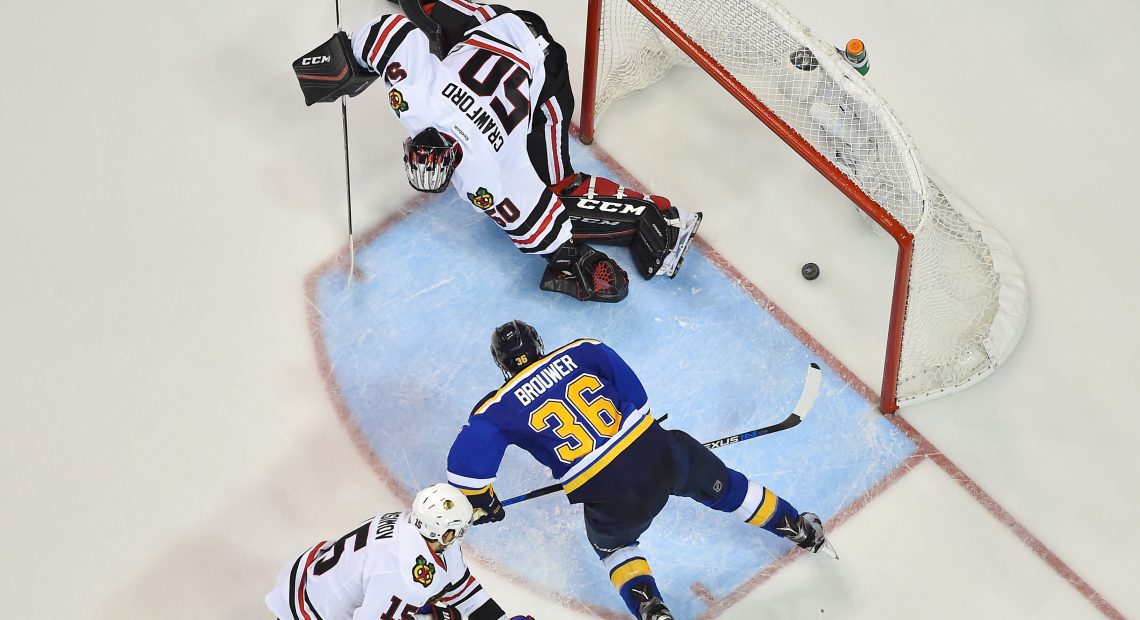 All it took was Troy Brouwer getting three whacks at an empty net and still barely getting it across the goal line, a Brent Seabrook shot that somehow rang off both posts without going in and facing a first round opponent that iced two viable defensemen, two semi-reliable depending on the shift and three flaming gas cans.

As Sam mentioned in the preview, this was always going to be more important for St. Louis to win. Too many people had their jobs and futures on the line. You’ll recall the last time the Hawks faced a team with a fork in the road, it was Vancouver. Vancouver ended up winning their Game 7 against the Hawks, then losing in Game 7 of a Stanley Cup Final, hanging on to their core for two more years too long to horrific results and now have a smoldering franchise that looks like it’s destined for the lottery for the foreseeable future.

So while there is a temporary sting in losing, keep in mind Ken Hitchcock may have saved his job. And David Backes may now get signed to a long term deal. Or whatever other long term decision the Blues make based on this one game and their subsequent upcoming playoff run.

Anyways on to what happened in the game.

–Watch enough hockey and you can see bad (or good) things happen a few seconds in advance. When Jaden Schwartz bit it inside the Hawks blue line and allowed Marcus Kruger to scoop up the loose puck, there was a very good opportunity for a scoring play.

Sure enough, he head-manned the puck to Marian Hossa who took three steps in and fired a bomb past Brian Elliott to cut the Blues lead to 1.

With the game tied at 2 in the third period, Erik Gustafsson skated right into a Blues forechecker and lost possession with the Hawks in the midst of a line change. This play was always going to have disastrous results.

Sure enough, the Blues whipped the puck around until Troy Brouwer had three attempts at a yawning cage.

It’s never a good thing when those types of plays take place because other guys on the ice try to compensate for the mistake which leaves passing or shooting lanes wide open. We saw it in Game 7 vs. Los Angeles when Nick Leddy lost his stick prior to the puck hitting him; we saw it when Chris Campoli’s poor clearing attempt was snagged by Alex Burrows in Game 7 vs. Vancouver and we saw it again tonight.

But of course, it should go without saying that it still took Seabrook ringing two posts for that to be the difference.

–Ken Hitchcock played his most dangerous line of Schwartz-Tarasenko-Lethera all under 20 minutes in a must-win Game 7.

Meanwhile, he was riding Brouwer and Backes well over 20 minutes, almost begging for a close game.

Why do I feel like if the coaches changed benches, Joel Quenneville would’ve swept the Hawks in four games? Probably because he would have. So tell me how it’s a bad thing if Hitchcock will still be the coach of this outfit for the next few years.

–For me, it seemed like the Hawks had their chance to put their stamp on this game in the second period. Andrew Shaw and Patrick Kane were turned away multiple times by Elliott, including a one-time save of Kane that he probably buries 95 out of a 100 times.

The Hawks were buzzing, much like they were in Game 6.

The fact that it remained tied after the insane surge from the Hawks was a huge advantage to the Blues because the Hawks simply don’t have the depth on the back end to keep that pressure up for long periods of time.

Then the Blues started pushing back and it was the Corey Crawford Show once again.

–Marian Hossa had a transcendent performance and it would’ve been nice for the Hawks to win so he could’ve been recognized for it. In the first period, he looked like he was basically going to will this team to a win. He scored the first goal and then on his next shift took the puck whenever he wanted it. He made Carl Gunnarson look like Carl Gunnarson and nearly tied the game.

It would’ve made for a fabulous memory.

–As I’ve mentioned a few positive things to come out of this unfortunate result:

I’m sure there are more. Those are just the first few that jump to mind.

The one major con is that Corey Crawford’s best season was wasted. With the unpredictably of the goalie position and random fluctuations from season to season, you hate to see such an amazing performance go for nothing.

–I think that’s all for now. This was one of the better games and series over the past seven seasons. I will never be unimpressed with the Hawks ability to continually rise from the dead even after the dirt is covering their grave. This series should’ve been over in 5. Instead, it was taken to the brink and was a double post away from overtime.

It’s simply amazing. And hopefully, there SHOULD BE* a few more runs in store.