And Then There Were 2: Rocky Fires John McDonough 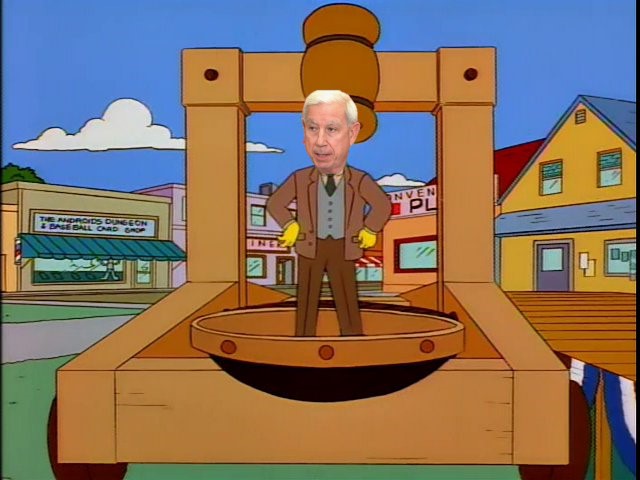 Despite the silent scream of COVID-19 keeping us all locked up, pissed off, and stir crazy, Rocky Wirtz made a stunning albeit welcome-around-these-parts move in firing longtime President and professional autofellatio guru John McDonough today.

First, the good. McDonough was here for 13 years. He ushered in an era where Blackhawks fans could not only watch hockey on the goddamn television in 2007 but also enjoy it. After squeezing as much blood out of the Loveable Loser stone as he could for the North Side Nine, he oversaw a renaissance of Chicago hockey.

Nine straight playoff appearances. Five Conference Finals appearances. Three Stanley Cups. And whether you like it or not, he had a hand in making the game an experience that 20,000+ could enjoy night in and night out. But we won’t go too far into that, because we’re sure if you hold your ear close enough to the ground, you can hear McDonough himself pucker up to kiss his own ass about it.

For all the good McDonough bestowed upon this team during his tenure, it’ll always be hard, if not impossible, to forgive the 2015 Notre Dame debacle. Of all the contributions we at FFUD will remember him for the most, it’s his vile effort to turn a horrifying rape allegation against his star player into a fucking marketing push.

You might remember him calling the Hawks’s three Cups in six years a “Camelot” era for the Hawks. In the same place where he and his spineless GM tucked tail and ran when pressed on what they would do with their alleged rapist of a star. For a guy who has a gas mask connected to his asshole 24/7 when it comes to talking about what a great marketing campaign looks like, he couldn’t have dreamed of a better way to fuck the optics of that one up. Then again, perhaps in true Galaxy Brain form, he just knew that the troglodytes would bury any earnest concern in the name of winning.

But that was always McDonough’s MO when it came to doing things that didn’t involve sucking his own farts: When in doubt, run, deny, or reroute.

And though you can’t discount how much more visible he made the team, it would have been challenging for anyone not named Bill Wirtz to not succeed in the spot McDonough fell into. Putting an up-and-coming hockey team on television and then marketing it even a little bit does not require the genius that John McDonough wants you to believe it does, unless your opening act is the Bill Wirtz and Bob Pulford “Wet bag of human shit covered in burnt hair” routine.

McDonough certainly wasn’t the worst Hockey Man, but he certainly wasn’t the best either. He came on at a time where all he had to do was ride the wave and capitalize. The foundation of hope had been laid with Toews and Kane. All he had to do was sell it, which wasn’t terribly hard after the organ-I-zation spent the better part of a decade literally hiding the team under a rock (although in the late 90s and early 00s, you sort of get it).

If you want to give him credit for building this team, you should also place blame for where it is now. A team that’s grown fat on its throne with little urgency to do anything outside of chastise a fanbase with its eyesore of a scoreboard and no effort to make this team faster and better. Recall that in the last two years, Dennis Gilbert, Brandon Manning, Nick Seeler, John Hayden, and Chris Kunitz all played meaningful minutes for a team that McDonough himself wanted you to believe was a playoff team.

He will go down in the Hawks annals as a legend, despite the fact that we still aren’t sure what he’d say he did here that was revolutionary or forward thinking. Fortunately, we no longer have to figure it out.

What this means for the future is anyone’s guess, especially since Rocky went out of his way to assure everyone that Bowman and Colliton are his guys. Then again, now that McDonough is gone, so too could those two. If we had to guess, we’d say that Stan Bowman pulls a Shel Silverstein while Rocky goes out and looks for a GM whose greatest asset isn’t his consistent ability to look like he’s holding in hard gas.

What it DOES mean is that someone up there is seeing the shit we’ve been seeing down here and finally said “enough.” You can’t imagine that Daniel Wirtz, Rocky’s little brother (or son, whichever), will be anything other than an interim President.

It took a literal act of God to get us to this point, with Rocky saying that COVID-19 gave him some time to reassess the team’s direction. But given the suddenness of the firing, you shouldn’t be surprised if something unsavory slithers out of the front office as cause for the firing.