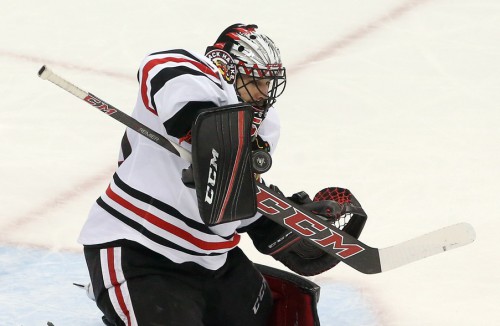 Well it was certainly better than Sunday’s what-have ya.

It started out a little slow, as the 1st period was certainly a tame affair with the Hawks trying to play “a good road game” (hockey term) and the Penguins still a little antsy about everything they’re doing these days. It would need a goal to open up, and it got one when Cullen, Malkin, and Kessel all watched Brian Dumoulin pinch down from his point and thought to themselves, “Boy his point is open, someone should do something about that.” That led to a YeastMode & The Douche (thanks to Anthrax that might be the official new name) on a 2-on-1 and that only ends one way.

The goal brought the Penguins back to life, and they proceeded to roll the Hawks for the last half of the game but Crawford stood up to pretty much everything they had. Hawks scratched a second when Seabrook was able to do the geometry off Toews, but the Hawks couldn’t hold up under the Pens’ pressure and coughed up the lead, based off their high end individual talent in Crosby and Letang.

Overtime with this much talent was always going to be a raucous affair, and Fleury (who had been excellent in the game as well) blinked first when Pantera got a clean look.

-It’s yet another two points that Crawford allowed the Hawks to grab. Without him they at least cough this up in the 3rd, with his save off a Kunitz one-timer possibly being the highlight. We’re running out of words for what Crow is doing this year. He’s up to .925 and 2.22, and behind this defense that really shouldn’t be. It’s clearly as confident as he’s looked in his career. Normally the cycles with Crow are that as he plays better and better, he’s more aggressive coming out from his net and cutting off angles. And then at some point he starts coming out too far, perhaps binging on confidence overly so, loses his angles, gets lit up a couple times and then his confidence is shot and he start retreating under his own crossbar until the whole thing repeats itself. That hasn’t happened this year. He’s found his game and his spots and hasn’t let go. He’s making it look easy, which is the true sign of quality. And the Hawks have needed every bit of it.

-The Hawks’ best line tonight was its third, and they really have unearthed something with Teuvo-Danault-Desjardins. Danault is going to be a fascinating watch the rest of the season (I’m assuming he’ll stay with the Hawks but we know how that can go). As Feather pointed out on Twitter, at the same age his offensive game is way more developed than Kruger’s was, and it’s weird that was the ceiling chosen for him when he entered the organization. Danault looks far more likely to become something in the Bolland pre-Cup days, a checking center who can also give up 15-20 goals and 40+ points. I really don’t think that’s a stretch. And then the question will be what do you do with Kruger in the summer?

For now, we’ll just enjoy Danault’s puck pursuit, his positioning, and the non-stop feet. The Hawks did have a bottom six problem. Now it just might be a 4th line problem. Color me surprised if Richard Panik somehow ends up solving any of this.

-Panarin got the first Hawks goal and the last, but that line got kicked around again, this time by Crosby’s line (and that will happen). The second line has had possession problems for a while now that Kane has been able to outscore, either at evens or on the power play, and he may be able to do it all season. But that’s not something you want to count on. While Foley wants to blame the problems and Anisimov’s faceoff struggles, and that’s not entirely aside from the problem, it’s more than that. Kane and Panarin are not the type of wingers that are going to get the puck back consistently when they don’t start with it. Neither are forecheckers, and while they’re hardly useless defensively they’re not going to win a lot of board battles either even when they’re where they’re supposed to be. Keep an eye on it.

-Hossa looked more inspired tonight, which led to a more effective game from that line. I’m fairly certain Desjardins is going to get a run there as he’s been good on the third and Shaw is his usual wayward self. That’s if the Panik thing doesn’t work.

-Seabrook had a couple shifts tonight where I thought it was quite possible he might pass out in his own zone. He was mostly paired with Gustafsson who has some promise but is obviously going to have some yips in his first foray into the NHL. Seabrook just looks a step behind a lot of shifts and a lot of nights, whatever his inflated point total may say.

-Boy that bottom six of Pittsburgh sure is something. Because when you put your hand in a pile of goo…. that’s the Penguins bottom six!

They’ll do it all again tomorrow. Onwards…