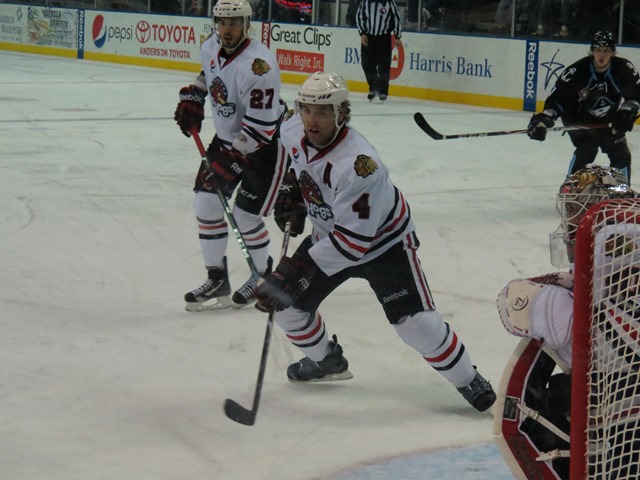 On Wednesday, March 27th, the IceHogs started the week on the right foot as they beat the Toronto Marlies 4-1 at the BMO Harris Bank Center. Jeremy Morin tallied a power play goal and a shorthanded goal for Rockford. Steve Montador also chipped in on the scoresheet and Brad Mills registered an empty net goal. Goalie Carter Hutton made 19 saves for the Hogs in the win.

The Milwaukee Admirals rolled into Rockford on Friday, March 29th. The Midwest Division rivals from north of the Illinois border scored the first goal of the game with 2 seconds to go in the opening period and took the victory 3-2. Brandon Svendsen and Martin St. Pierre scored for Rockford and Carter Hutton made 41 saves.

The next night, the Hogs welcomed the Oklahoma City Barons into the BMO for the final time of the 2012-13 regular season. The Hogs stormed out to a 2-0 lead in the first period with markers from Brandon Svendsen and Brad Mills. But that 2 goal lead didn’t last very long. The Hogs gave up 7 unanswered goals to the Barons; the visitors had a 7-2 lead late into the third period until Shawn Lalonde scored with about 3 and a half minutes remaining to make it 7-3. Carter Hutton was pulled in favor of Henrik Karlsson after 4 goals against.

On Tuesday, April 2nd, the Milwaukee Admirals were back at the BMO. Kyle Beach got the party started for Rockford with a shot from the high slot at 18:02 of the opening period. Michael Latta tied the game for Milwaukee at 15:31 of the second period, but Hogs defensive-defenseman Ryan Stanton scored the go-ahead goal with 1:13 left in the middle stanza with a shot from the right circle, which gave the Hogs the 2-1 win. Henrik Karlsson made 31 saves in the win.

-Defenseman Shawn Lalonde was used as a forward in the third period of Saturday night’s tilt; that was when he scored his 5th goal of the season. He seemed to fit in pretty well there and didn’t seem too out of place. As a side note, the Hogs dressed 7 defensemen that night with an already shorthanded line-up without the likes of Ben Smith, Jeremy Morin and Jimmy Hayes.

–Brandon Pirri was hurt in Saturday’s contest after Brad Mills’ goal. He held his left wrist area as he left the ice, but he returned for the start of the second period. He didn’t miss a beat and played just fine in Tuesday night’s game. On Tuesday, Pirri’s work ethic and determination really showed—he wasn’t the least bit hesitant to go battle for the puck in the corner and he was sticking up for himself and giving guys subtle whacks back if they gave him one (nothing that would cause him to take a penalty of course).

–Phillip Danault and Mark McNeill were in the line-up on Tuesday night. They fit seamlessly into the line-up:  McNeill took Jeremy Morin’s spot on the first line with Morin out of the line-up while Danault was used on the penalty kill and the power play. For those that haven’t seen Danault play, his work ethic is second to none. The kid never gives up and he’s a joy to watch; most Rockford fans figured that out last year though when he joined the team at the end of the season.

–Joakim Nordstrom had a solid game on Tuesday night. He didn’t do anything flashy, but as he gets more comfortable in the Hogs’ line-up, he’s starting to be noticed more for the little things he does. He seems to finish his checks and dig in the corners. He was even used a bit on the penalty kill.

-Ben Smith sat out the weekend’s and Tuesday’s games with a mid-body injury. It’s not quite an upper body injury, but it’s not quite a lower body injury. For anyone that saw him over the weekend or on Hog Talk on Monday/Tuesday, they saw the splint he has on his right forearm. On Hog Talk, it was said that the injury was suffered during the brawl at the Hogs’ bench on March 17th in Chicago and that Smith had been playing through it for a couple of games before he just couldn’t do it anymore.

-The Hogs really got a boost to their roster with Jimmy Hayes, Phillip Danault, Mark McNeill and Jeremy Morin being reassigned back to Rockford prior to Tuesday’s tilt. Morin sat out, though. But the presence of the other 3 was felt and was much needed.

–Jeremy Morin scored his 100th AHL point on Wednesday with his power play goal and he played in his 150th AHL game on Friday night against the Admirals.

–Brandon Pirri registered his 100th AHL assist on Wednesday against the Marlies.

-IceHogs forward Philippe Paradis was traded by the Blackhawks to the Tampa Bay Lightning during Tuesday’s game. The Blackhawks’ return on the deal was the rights to Cornell University defenseman Kirill Gotovets.

Yes, there really are 3 games in a row with Peoria coming up… Welp.