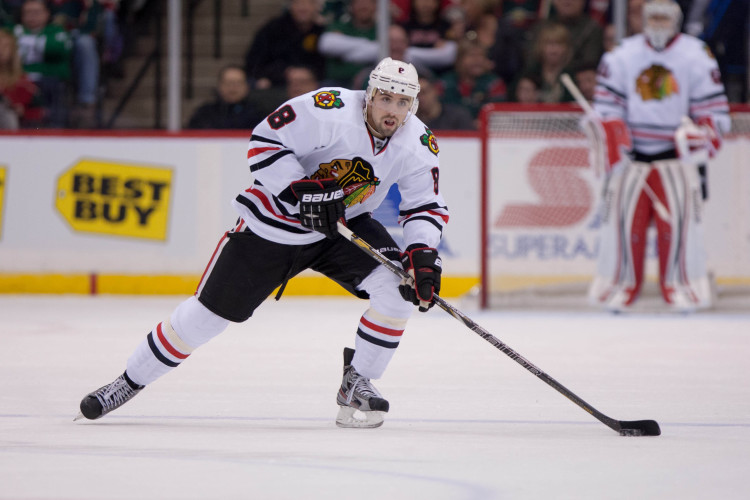 We are utterly delighted to announce that The Fifth Feather is joining our team. As you probably already know, The Feather has been maybe the smartest Hawks blog going for a while now, and we’re lucky that that level of hockey intellect and snark will be part of our dysfunctional family. Don’t worry, he won’t be making our twitter feed any more schizo, as he will still be found @fifthfeather. And for all you other Hawks blogs, if you’re worried that we will systematically add your biological and technological distinctiveness to our own to make an all-powerful species, we will. Resistance if futile. -Fels

So this is what the other side smells like. I can see why I’ve been away for so long.  Anyways, let’s get to it.  You’ve all waited long enough.

–Patrick Kane is looking more and more like a basketball player in hockey equipment after every game this season.  What I mean by that is his ability to slow down the play, handle the puck, and maneuver his way around the ice is very point guard-esque.  His assist on Hossa’s OT winner in Dallas should’ve been on an Ahmad Rashad-narrated highlight reel.  (Is Ahmad Rashad still alive?  Is he still roaming NBA sidelines?  These are questions I need to know answers to. Also, let’s put “Inside Stuff” back on the air while we’re at it.  That show was great.)

–Let’s give credit to whoever removed the giant Swedish meatball that was residing in Niklas Hjalmarsson’s cranium the past two seasons.  His patience with the puck and ability to take a check has been sorely missing since Lord Stanley was hoisted.  And the first person to mention the Jason Pominville concussion from two years ago as some reason for his subpar play gets to be the first person blow-torched. (Did I mention I brought a blowtorch with me in the move?  That’s right, I did.  Be afraid.)

–I like Johnny Oduya.  I think he’s a really solid hockey player.  But I will not allow myself to be sucked into a false sense of security until the playoffs roll around.  Maybe it’s the scar tissue of him looking more like Steve Poapst reincarnated against Phoenix but he still has to prove himself when the playing surface shrinks and the decision-making process quickens.

–Hockey is such a funny game.  After the playoffs last season, there were more than a few people that wanted a complete tear down of the roster and declared the Hawks further from the Stanley Cup than ever before.  And of course, now they are a legitimate Cup contender and are likely a top 3 seed in the Western Conference.

I really enjoyed this article I read the other day for a number of reasons (number 1 with a bullet is the comment section where hockey fans harpoon the guy for not knowing hockey and the guy has to go on the comment section to defend his hockey resume.  On a Harvard Business Blog.  Never change, hockey fans).  The main point of the article is something I’m a firm believer in and that is luck plays a bigger factor in hockey than any other sport.  Yeah, it helps to be the most skilled team in the league but without much luck and you’re essentially begging for a first round elimination.  Just ask Detroit.

–The Hawks resurgent power play should serve as a reminder to us all that assistant coaches are largely interchangeable and highly overvalued.  Just as Kings fan bitched about what an awful coach Jamie Kompon was, Hawk fans are now singing his praises for being some kind of power play whisperer.

–Games like he had against Minnesota show why there is a lot to like about Andrew Shaw.  But let’s not have any illusions during the good times: He’s nothing more than a role player.  Albeit, a very useful one, but not a guy that should be counted on for any kind of consistent offensive production.

–Yeah, he’s off to a very good start, but I’m all for tying Corey Crawford to the net, a la the Gimp in “Pulp Fiction.”  He over-commits to pucks like Matthew Perry over-commits to romantic comedies.  The results are him swimming all over his crease when he loses his net.  Please stop this.  Unfortunately, I think that’s just who he is.

–Are there really people out there questioning Brandon Saad and his reason for playing on the top line?  Amazingly, not every young player walks into the league and sets the world on fire.  Maybe this is just my amateur eye but he’s fit in as well any other guy the Hawks have thrown up on the top 6 in the last two years (admittedly, not an impressive list) to play with the stars.

–There are few things sexier than Nick Leddy carrying the puck with a full head of steam.  It’s very easy to see why Stan Bowman fell in love with him three years ago.  So far, he’s used his speed to make something happen offensively at least once in every game.  It’s amazing how much more comfortable he looks when he’s not asked to play 20 minutes a game, kill penalties, carry a dead beat partner around the ice, and play against top lines.  Funny how that works.