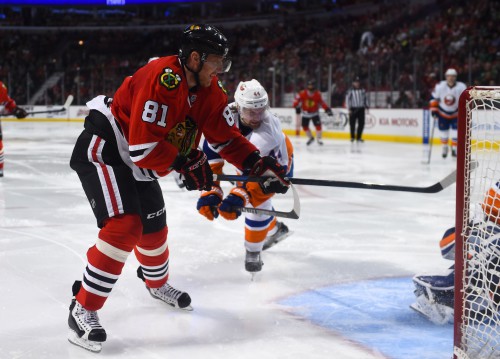 This is such a strange team at the moment. The Hawks were certainly the better team in the 1st period as the Islanders basically treated getting out of their zone like Joe Walsh treated getting out of a party and Michal Neuvirth handed them two goals. From there, the game pivoted on the five minute major stemming from possibly Andrew Shaw’s dumbest moment in the NHL (and that’s saying something). The Hawks killed off a major with only one shot against, and you knew from there the Hawks would find another goal and basically end this as a contest. Hossa was able to one-time a very rolling puck into the top corner and… ballgame.

What makes them so strange is they still gave up 39 shots. While they never looked truly in danger, the Islanders without two of their best possession drivers were able to press and press. Was it because the Hawks were up early and could just play Cover-2 for the last 30? Was it because they were defensively deficient? Honestly, I have no idea.

What I do know is that Corey Crawford is the best Hawk right now, and it isn’t even close. Let’s get to it:

-We knew that it was only a matter of time before the first line popped off. It only took Kris Versteeg not being there to turn pucks over at the blue line for it to get there. They were a combined +37 in Corsi with score adjusted. While Fifth Feather rightly wondered if there was something wrong with Toews the past couple games, when faced with another premier center tonight Toews swallowed Tavares whole and spit out only most of his bones. Give him something to prove, and Toews will get into you up to the elbow.

-Crawford created some of his own problems tonight with some slightly wonky rebound control, but obviously made up for it on his own. Name a goalie playing better right now not named Devan Dubnyk. You can’t do it.

-I really have enjoyed watching this Islanders team all year, and not just because their jerseys are the balls. There’s no bigger Nick Leddy fan than me, but when this game was still in the balance they looked completely lost without him and no team should count on him that much. The turnovers in their own zone felt like a bit.

-Once again, Kimmo Timonen’s possession numbers are ugly, But I see a slow arc up, though I’ll admit it might be because I want to. Timonen wants to play the game the Hawks need. That is, high pressure at both blue lines. Pinching to keep attacks going in the offensive zone, not giving up the Hawks’ line easily in the hopes of turning around play quickly. It’s his natural instinct. Right now, he just doesn’t always get there in time to do so, though that ratio is starting to lean in the right direction. I hope it gets there.

-Doesn’t Kris Versteeg look better when he’s playing 4th liners? When he’s not turning pucks over at his own line, that is.

-I think it’s somewhat odd that Antoine Vermette hasn’t been used on any special teams. During a five minute kill, the Hawks stuck to Kruger, Saad, Hossa, and Toews, and only Desjardins and Versteeg got a shift during it. Vermette has been killing penalties his whole career. Then again, when things have gone this smoothly with what Q knows, I get it.

-We worry and are paranoid, but after Shaw was ejected the right wing to take most of his shifts was Teuvo Teravainen. Q loves this kid, he’s not even hiding it any more, and we should trust his handling of him from now on.

-The Hawks sit four points back of the Preds, but have three games in hand. It’s gone from loosely in their hands to tightly. That’s the nearest target. Those games in hand are in April, but tomorrow is a good start. The Hawks have been piss poor (by their standards) on the 2nd of back-to-backs this season, and tomorrow sees them taking on the best the East has to offer. We’ll know where the recovery is when it’s over, methinks.