Seeking a Friend for the End of the World – Hawks beat Sharks, lose to Predators and Flames 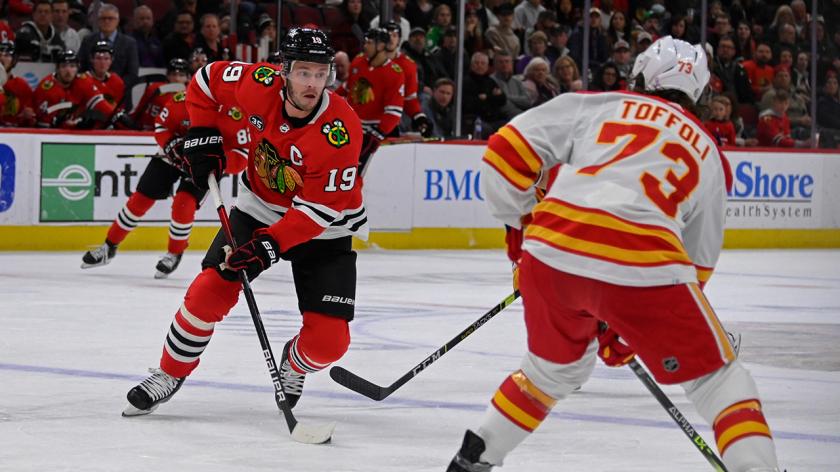 The Hawks did about what was expected the last three games, looking alive enough to win one game for Pat Foley before they ended up getting schooled by Nashville and Calgary, two playoff teams of differing skill levels that still skated circles around the Hawks. As is life on Madison these days.

Lukas Reichel’s first-year contract is now officially burned as he garnered around 31 minutes for a team playing for nothing. You would think doing this goes directly against the organization’s narrative of keeping all other Hawks prospects down in Rockford for the Tomato Can Playoff Push while players like Riley Stillman, Erik Gustafsson and others get NHL minutes instead of them, and turns out the front office realized the same, as it was announced last night he was heading back to Rockford this morning to go win the Tomato Can Hockey Cup. Good luck!

The Hawks finally got their give-a-shit meters to work again, and all it took was their beloved announcer calling his last NHL game and a matchup against another garbage team on a losing streak of their own. Kane, the Cat, Strome and Amy’s Eldest had multi-point nights, while Raddysh with a Y extended his scoring streak to two games. On the other end of that spectrum, defense was nowhere to be found, Reichel took away a puck in the 2nd and then immediately gave it away again five seconds later for his highlight of the night, and Toews, Dach and newly signed Reese Johnson were pointless in this game that should’ve been a point-grabbing free-for-all for every player involved.

The Hawks and Sharks seemed to trade goals all night, as the goaltenders on both sides of the ice were downright bad. Lankinen’s positioning and rebound control were, of course, all over the place, and the Sharks always seemed to have an answer for whatever goal the Hawks scored. Overtime sucked, as both teams didn’t really do shit on either end, trying to get to the shootout, I guess. But the Hawks can still cling to shootouts as something they’re relatively good at, and were able to win the game because of it thanks to a nasty goal by the Cat. Someone’s gotta get it done.

Outside of all the offense, there was too much clowning in this game for my liking. The fact that the Hawks punched Timo Meier in the head because he did a snow spray on Kevin Lankinen was a choice, and then Stillman fighting Jeffrey Viel over it was also a choice, and then Jake McCabe taking a myriad of dumbass roughing and unsportsmanlike conduct penalties was by far the stupidest, most exhausting shit of the night. Remember when this guy was signed to be an effective shutdown defenseman or whatever the fuck? You can’t do that when you’re in the box. It’s time to move on from this style of hockey, I’m exhausted.

Starting this game out by watching Jeremy Lauzon’s knee bend in ways it should never be able to bend was certainly not the best, and the Predators were able to get out ahead soon after that to set the tone for the game. The Hawks led once thanks to efforts by goals by Kane and Dominik Kubalik later on in the 1st and 2nd periods, one in which Kane mouthed off to some dude in front row seats because that’s hockey baby. Reichel and his newly-burned first-year contract got his first NHL point in a pretty neat assist to Kubalik’s goal, however, and we’ve all been waiting for that. It was a good moment.

Lankinen didn’t look too terrible in this game either, making more impressive saves in this game than the previous. But right after Mackenzie Entwhistle and Boris Katchouk were assessed penalties—including one game misconduct—for REASONS, the Predators completely turned the game around in their favor, with Roman Josi scoring just a minute later to tie things up. Two more Predators goals at the end of the 2nd and the 3rd sealed the deal for the Hawks—the first goal on a Nashville powerplay thanks to Alex Vlasic and a dumb high sticking penalty, speaking of clowning. Despite Kane making a passing play that any Joe Schmoe, including Stillman, can put into the back of the net, the Hawks were pretty overpowered in this game and it showed as they came up empty in the points column.

I predicted this outcome, and I’m sure you did too. And the Flames spent no time making the Hawks look silly, scoring 22 seconds into the game with a fluky goal that Lankinen will probably see in his nightmares. In fact, the Flames had two goals before the Hawks could even register a shot on the fucking net, as I continue to be perplexed as to why Raddysh with a Y was the one tasked to try and stop Johnny fucking Gaudreau from scoring, a mistake I’m sure Derek King and his man behind the curtain will not make again.

The two teams’ meatheads in Nikita Zadorov and Jake McCabe went at it after Zadorov continued to show his ass by putting a big hit on Toews in the first period. Toews then got high sticked right off the faceoff, had to leave to get stitches, and the Flames scored again to put them ahead for the rest of the game, though Alec Regula scored the second and final Hawks goal in the 2nd period with a shot from the point that probably shouldn’t have gone in. Then the Flames rested on their laurels for a majority of the 3rd period, getting only four shots on net in those 20 minutes, probably because they knew they’d have multiple empty net opportunities with the Hawks yanking Lankinen for the extra attacker like always. Johnny Gaudreau isn’t going to miss those empty netters, and this game was no exception.

Thank God we’re almost to the end, and this schedule will be a tad easier as the Hawks revisit the Kings and Sharks near the tail end and face the Coyotes, barely an NHL team, tomorrow night. Can’t wait to see who will muck it up this time!