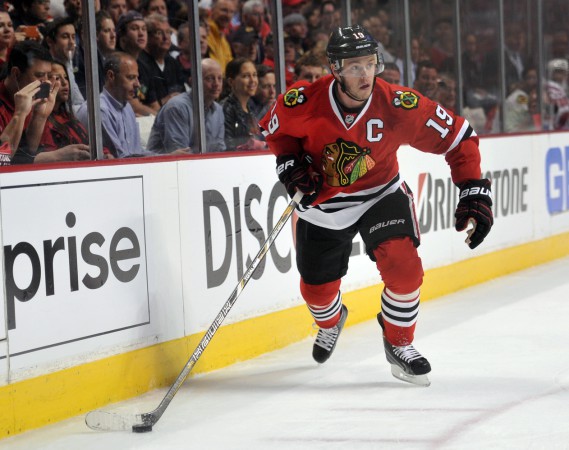 Let’s take a break from analyzing the Hawks bear-mauling of Scum last night — though it is fun to revel in — and focus on some other news that broke this week. As you know by now, Toews is one of three finalists for the Selke Award, given to the best defensive forward (and actually, center, but more on that in a bit). The others are the excellent Patrice Bergeron and the finalist-until-three-days-after-he’s-dead, Pavel Datsyuk. This has been coming for years, as we were trumpeting him for the award as early as the ’08-’09 season.

This is such an odd award, much like the Norris has become or the Gold Glove award in baseball has been (which is why Darwin Barney’s win last year was really a surprise). Because the true defensive centers really get no attention. Jay McClement is one who does excellent work, but he doesn’t score a lot so there’s almost no chance he’ll be considered. Gregory Campbell is another. You get the idea. So in order to win a defensive award, you really do have to score to get noticed.

Another weird facet of this award is it’s handed exclusively to centers. Part of that is faceoffs have become such a huge consideration for it, which is understandable if not always a true measure. But hockey doesn’t have as many stats as baseball and in as many categories, so there’s just less to look at to judge on.

So what do you judge it on? Do you look at the quality of competition that a forward has faced and come out ahead of? That’s one way for sure. How does Toews stack up to the other finalists and other forwards in that sense? He’s faced tougher competition that the other two, clocking in at a .086 GA/60 Quality of Competition, good for 14th hardest in the league amongst forwards. Dats was 18th at .079, and Bergeron wasn’t even in the top 30. If you’re curious, Jamie Benn faced the hardest overall in the league, followed by Andrew Ladd and Zach Parise.

Next, obviously the amount of goals against would be something you’d want to know about. If you go by goals-against per 60 minutes on the ice, Dats leaps ahead of Toews, 1.41 to 1.70 (11th and 22nd in the league, respectively). However, Bergeron tops them both at 4th in the league at 1.20. Funny, this category overall is led by three Hawks with Shaw 3rd, Hossa 2nd, and…..wait for it….Viktor Stalberg first.

What do you conclude from that? First, obviously, is that the Hawks were pretty much Mossat-level defensively this year (BREAKING NEWS!). Does Toews’s defensive rep benefit from that or is he one of the causes? Probably both. But it’s hard to decipher.

Penalty killing, of course, is another category voters like to use. Bergeron again leads this category amongst the finalists, 4th with a 2.77 GA/60 while shorthanded. Toews is 14th at 3.65. Dats isn’t even in the top 30. This was led by Van Riemsdyk of Toronto.

Both Bergeron and Toews have ridiculous faceoff numbers, at 1-2 in the league with Bergeron leading at 62.1. Both were just as good shorthanded. Still, the number it’s hard to get past is that Bergeron was on the ice for all of 17 goals against all season. No matter how flawed of a stat that is, it’s pretty impressive. Bergeron was also 2nd in CORSI per 60 among forwards, and isn’t the best defense just keeping the puck?

It’s hard to deduce that, because really what these three do best is actually just keep the puck away from whoever they’re playing. You could argue that’s not exactly being defensive, but it’s also the surest way to make sure the other team isn’t scoring.

I feel like you could make an excellent case for Hossa for this award, as the eye-test tells you what he’s capable of defensively. But he doesn’t take draws, and a forward’s responsibilities defensively mostly have to do with covering point-men. That seems unfair, and I’m sure there are a lot of wingers who should be considered if Hossa was. Ladd, Justin Williams, and if not now then soon Gabriel Landeskog come immediately to mind.

In the end, though I think Toews is the better overall player than Bergeron (who is still underrated by far too many people), the Boston center probably should just edge out Captain Marvel. But because of Toews’s more notice due to his offense, I wonder if he will.