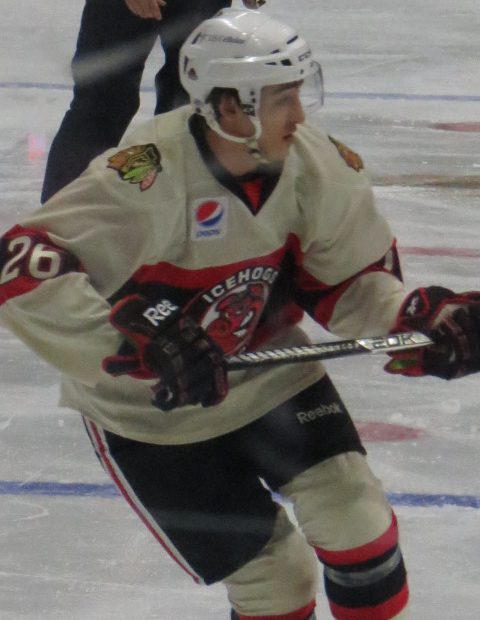 The IceHogs finished week 23 with two games against the Milwaukee Admirals. The games are a part of a three game set against Milwaukee that the teams will finish playing later this week.

The IceHogs traveled up to Milwaukee on Friday night for their first showdown against the Ads. The home team scored four goals by the halfway mark of the second period before Garret Ross was able to get the IceHogs on the board with a power play goal at 12:06. Milwaukee tacked on two goals before Rockford’s next one, which was scored by Brandon Mashinter at 3:29 of the third period. The final score was 8-3; Brian Connelly scored the last tally for Rockford.

-The Admirals outshot the IceHogs 35-25; Kent Simpson was in net for Rockford for the whole game.

-According to the box score, there were five fights in this contest; Brad Mills fought Michael Liambas twice.

-The scratches for the IceHogs were:  Viktor Svedberg (injured), Brett Skinner, Wade Brookbank, Mathieu Brisebois and Philippe Lefebvre (all healthy).

The IceHogs hosted the Admirals on Saturday night at the BMO Harris Bank Center. They were able to avoid Saturday night’s four goal hole—initially—and come out of the first period tied at one; Pierre-Marc Bouchard netted the goal for Rockford. Despite a second period tally from Terry Broadhurst, Milwaukee scored three goals during the sandwich stanza and two during the third period to take the game 6-2.

-The Admirals outshot the IceHogs 33-30; Jason LaBarbera was in net for Rockford.

-The IceHogs did not convert on any of their four power plays while the Admirals scored on one of their three man advantages.

–Wade Brookbank joined the coaching staff behind the bench for the third period on Saturday night.

-The scratches for the IceHogs were:  Viktor Svedberg (injured), Theo Peckham, Philippe Lefebvre, Wade Brookbank and Mathieu Brisebois (all healthy).

-One of the IceHogs’ best players on the ice on Saturday night was Pierre-Marc Bouchard. His shot on his goal was outstanding as he picked the corner from the slot. He created a lot of Rockford’s scoring chances during the game as well.

–Jeremy Morin’s point streak of 13 games was snapped on Friday night. On Saturday night, he received his AHL Player of the Month Award for February in a pre-game ceremony.

-The IceHogs had a hard time beating Admirals goaltender Marek Mazanec all weekend. On 55 shots on the weekend, only five went in. These two losses could be big for Rockford down the line as they battle to make the playoffs. Currently, the IceHogs have a record of 30-24-5-3 (68 points) and sit in seventh in the Western Conference standings. Milwaukee is in eighth and is 27-20-6-6 (66 points) and has three games in-hand on Rockford.