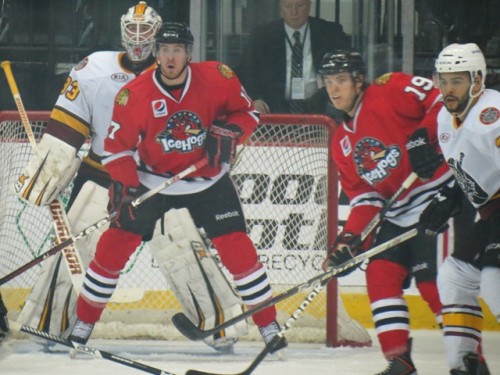 The IceHogs finished week 20 with two more Midwest Division games on the schedule. All four points mattered in these two contests as Rockford continues to make a late season push for the playoffs.

The IceHogs welcomed the Midwest Division leading Grand Rapids Griffins into the BMO Harris Bank Center on Friday, February 22nd. The IceHogs nearly blew their two goal lead in the the third period, but they were able to hang on to the lead and win 4-3 with tallies from Brandon Pirri, Jimmy Hayes (x2), and Mathieu Beaudoin. Rockford netminder Carter Hutton made 28 saves in the victory.

On Sunday, February 24th, the IceHogs rolled into Rosemont to take on the Chicago Wolves at the Allstate Arena. Henrik Karlsson nearly pitched a 2-0 shutout for Rockford, but Wolves captain Darren Haydar ended it with 29 seconds to go in regulation to make it 2-1. Brad Mills and Hogs captain Martin St. Pierre both tallied in the first period for Rockford.

-The IceHogs played very solid team defense on Sunday afternoon in Rosemont. They did a good job of preventing a dangerous Chicago team from having many grade-A scoring chances.

–Brad Mills and Brandon Svendsen, both of whom are signed to AHL contracts, have teamed up to be a good set of penalty killers. In the past few games, those two forwards have been a tandem along with defensemen Klas Dahlbeck and Ben Youds.

-IceHogs forward Kenndal McArdle, who is also on an AHL contract, continues to be a physical presence every time he steps onto the ice. He’s fearless going into the corners and is pretty good at knocking guys off the puck down low.

–Terry Broadhurst may not have put up any big offensive numbers this week, but he’s still playing very well and with a lot of confidence. He’s even been used on the power play during the last couple of tilts.

–Jimmy Hayes has been driving to the front of the net, which he hasn’t done consistently throughout the whole season. On Friday, both of his goals were due to him lurking in front of the netminder and grabbing rebounds. On Sunday, Hayes parked himself in front of Wolves goalie Matt Climie and set up Martin St. Pierre‘s game winning goal from there.

–Jeremy Morin has four points (G, 3 A) in his last three games. Morin is exuding some kind of fantastic swagger on the ice as of late. He just seems more confident and has been using his speed and vision effectively to set up some great plays, regardless if they end up in the back of the net or not.

–Brandon Pirri has three points (G, 2 A) in his last three games. He’s been getting some good scoring chances and been creating some good plays. He’s really been clicking with his wingers Terry Broadhurst and Brad Mills.

–Dylan Olsen and Philippe Paradis remain out with injuries.

-The IceHogs currently have a record of 27-25-1-1 (56 points). They are tied with the Milwaukee Admirals for 3rd in the Midwest Division and 10th in the Western Conference. The Ads have 2 games in-hand on Rockford. Also, the Hogs are 3 points out of a playoff spot. ****This is before Tuesday’s games had ended.

-The lines and D pairs in the last two games have looked like this: