High On The Hog: Primed For A Run? 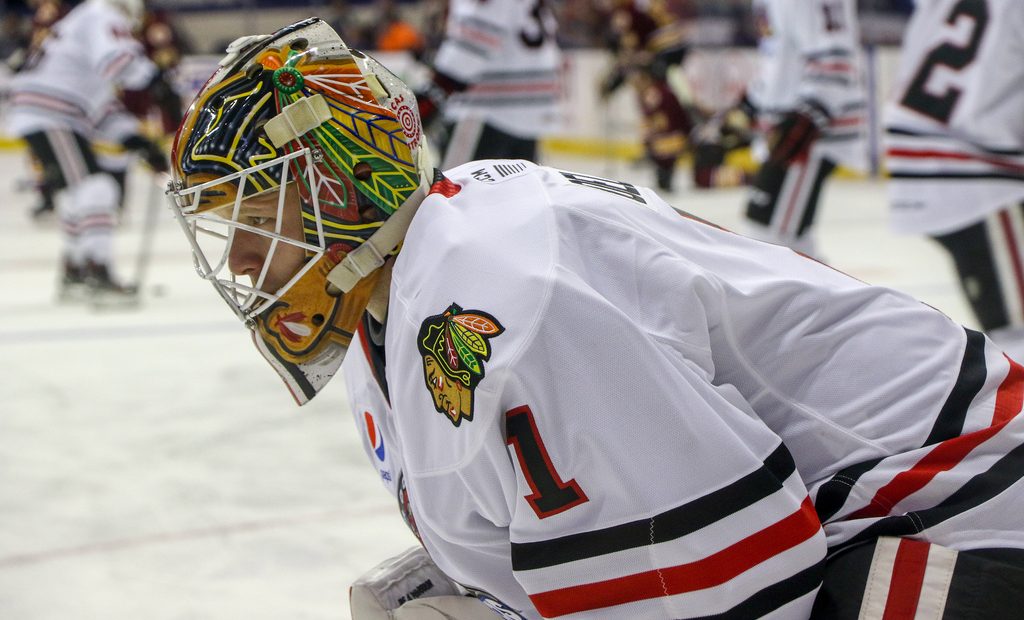 For the Rockford IceHogs, the action in March gets underway quickly. The Blackhawks AHL affiliate opens what is a pivotal month of the 2018-19 season at the BMO Harris Bank Center against Grand Rapids.

For the IceHogs, a team trying to secure a spot in the Calder Cup Playoffs next month, every point counts. The fourth spot in the Central Division is shaping up to be a battle between Rockford, Texas, Milwaukee and Manitoba.

Right now, the Stars are in that final playoff spot in terms of points percentage (.536).  The Hogs are not far behind with a .526 percentage. Rockford holds a one-point lead over Texas in the standings, though the Stars have two games in hand.

Both the Ads and Moose have .509 points percentages and are within four points of the Hogs. Any of these four teams (or even last-place San Antonio, for that matter) could wind up with a spot in the playoffs with a extended run. Conversely, even treading water in March could spell the end of postseason dreams.

Texas hosts first-place Chicago on Friday and Saturday, while Rockford’s game with the Griffins is the lone contest for the piglets this weekend. Following that contest, the Hogs will have eight days off before traveling to Manitoba for a pair of games on March 9 and 10.

The IceHogs beat Grand Rapids in comeback fashion in the last meeting between the teams on February 20. The Hogs have dropped three straight games since that night, including a 1-0 loss in Chicago Tuesday night.

Colin Delia, in his first game back with the Hogs since being re-assigned by the Hawks, stopped 15 of 16 shots. However, his counterpart in net, Max Lagace, blanked Rockford with 27 saves on the night.

After a return visit to Grand Rapids March 15, the IceHogs will have eight of their next nine games at the BMO. If they can go 7-2 as they did in their most recent home stand, they should be in in good shape to make a run at the postseason.

Does this group have the talent to turn in another dominant spring? We’ll see. Unlike last year, what you see in Rockford is what you are going to get, for the most part.

The only current member of the Blackhawks who would be eligible for the Calder Cup Playoffs (not counting Delia, who is already with the IceHogs) is Dylan Sikura, who was sent to Rockford in a paper move at the trade deadline. Only players on the Hogs roster as of February 25 can skate in the postseason, not counting late spring ATO and PTO signings.

Whether the Blackhawks get into the playoffs or not, we won’t see a big influx of players coming in to upgrade the Hogs. In fact, Rockford might lose a player or two to emergency call-ups. Depending on how much time Drake Caggiula misses after his concussion, the Hawks may bring up a player like Andreas Martinsen, Luke Johnson or Peter Holland to fill out the bottom six.

Delia was a huge part of last spring’s playoff run to the conference final. That said, he’s not a huge upgrade in goal. Both Anton Forsberg and Kevin Lankinen have played very well in Delia’s absence. I think any of the three goalies could excel if required to carry the workload in net.

The X-factor for the IceHogs is health. There are several players who could make a difference for Rockford who are currently injured. Defenseman Brandon Davidson missed almost a month of action, came back for two games February 17 and 20, then has been out the last three. If he could stay on the ice, Davidson would be a nice veteran piece to have in the lineup.

Forward Terry Broadhurst has not played since February 16. William Pelletier was banged up February 20 and has missed three games. Tyler Sikura has been out since early January with a broken thumb. Matthew Highmore, last season’s MVP, is practicing but has yet to return from a November shoulder injury.

If all the above players could all get back into the Hogs lineup in the coming weeks, it would made a huge impact on Rockford’s playoff chances. This doesn’t seem likely. However, getting Highmore and one of the Hogs AHL signings (Broadhurst or Pelletier) back for the last four or five weeks would still be a positive for Rockford.

Nathan Noel, who had been out since January 12, returned to action this past weekend. On Wednesday, the Hogs sent Brett Welychka back to the Indy Fuel of the ECHL. Recently acquired forward Spencer Watson played for the Hogs Tuesday night in Chicago.

Follow me @JonFromi on twitter for intermission updates tonight, as well as thoughts on the IceHogs all season long.