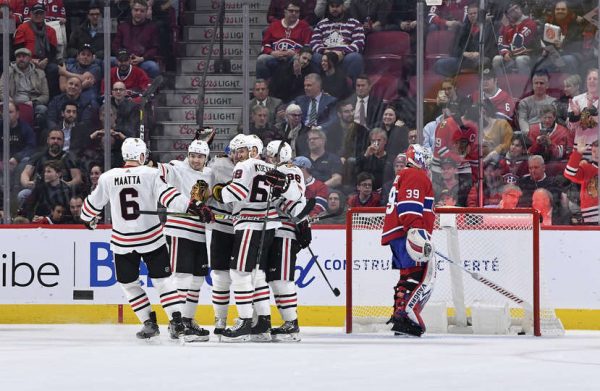 We know exactly what it feels like to be what the Habs were tonight…dominant in possession yet unable to capitalize on the power play and losing to a mediocre team. The difference is, the Hawks have excellent goaltending and Montreal most certainly did not. Although Crawford (great as he was) isn’t the only story tonight. Some fourth-line luck and decent special teams work did what they’re supposed to do, and were enough for a win. Let’s get to it:

–It’s hard to believe I’m writing this, but Zack Smith was the difference-maker tonight, proving that there really is a first time for everything. But hey, good for him, right? Early in the first, he and Drake Caggiula took advantage of Charlie Lindgren being Charlie Lindgren when there was a bad turnover behind the Habs net on the PK, and it resulted in Smith scoring a short-handed goal. Then Smith potted another (even strength) goal barely three minutes later, and it was undoubtedly the best period of his life. It’s easy to laugh at the situation, or laugh at the Habs for letting this bum score twice on them, but honestly it was downright refreshing to have someone different step up and score. Especially with this being the second of a back-to-back, having the fourth line eat up some minutes and be productive while doing so was exactly what was needed.

–Related: when Drake Caggiula scores on you, you suck. Sorry, Lindgren, but it’s true.

–On the other hand, Dominik Kubalik suddenly couldn’t buy a goal, and not for lack of trying. He had three shots, all of which would have been easy goals, well, last night or any game in the last little stretch here. They were those point-blank shots that make you wonder how it couldn’t possibly have gone in because given the laws of physics, it would seem much more likely that the puck would go in rather than stay out. In fact the top line as a whole struggled to find the back of the net, and it was when Caligula moved off the top line that he did end up scoring. It’s really not a big deal (who gives a shit if they don’t score in one game?), but my concern is that Coach Cool Youth Pastor will use this as proof that Kubalik-Toews-Kane isn’t the right combo for the top line because they didn’t score in the .02 seconds they had on the ice together. But here goes dumb ‘ole Caggiula scoring so he’ll be back on the top line by Saturday.

–Adam Boqvist had a couple nice plays, although the stats were rather ugly for the night. In the first period he saved a goal when Crawford got lost in space and couldn’t make it back to the far post in time, and it was a good keep by Boqvist at the blue line that set up Top Cat’s power play goal in the second. He flashed some speed but finished with a miserable 24 CF%, so cherry pick whatever you want from that information. Our other tender-age star, Kirby Dach, had a no-good very bad game. In the first, he broke his stick on an power play attempt, right in the slot and you could practically hear the sad trombone sound, and he followed it up by taking a penalty a few seconds later to negate the advantage for the Hawks. Even beyond that, he fumbled shots, and his line with DeBrincat and Kampf only managed a 38 CF% at evens. Like the top line, it was nothing to get upset about–both Boqvist and Dach are going to have games like this–but it’s becoming worrisome that Dach has struggled for a couple weeks because he needs confidence and decent coaching at this impressionable stage. Right now he seems to be sorely lacking both.

–Corey Crawford was outstanding as usual in Montreal. Admittedly he looked a little shaky in the first, particularly when he fell on his ass behind the net, all by himself, but it obviously only injured his pride. Losing his net when Boqvist had to bail him out was also concerning, but when it mattered most he was lights-out. He finished with a .970 SV%, and the one goal he did give up came in the midst of the Habs completely running over the Toews line, in one of the stretches where it felt like the Hawks were dispossessed for hours at a time (there were many of these). For all the Habs’ dominance in possession, he was up to the task the rest of the time with a number of excellent saves, and overcame some rebound issues early on. People can sing Lehner’s praises all they want, but Crawford is god.

–It was good to see DeBrincat score, especially on a power play. Nothing earth-shattering, but let’s take what we can get.

So far, so good on this road trip. Or train trip, which the broadcast wouldn’t shut the fuck up about. They honestly sounded like old-timey boosters describing the wonders of the new iron horse, as if millions of people don’t take trains every damn day (and as if professional soccer teams in Europe don’t use them constantly to get to games). Dumbasses. But hey, wins are wins, so onward and upward…