Game #26 – Hawks vs. Jets Douchebag Du Jour: The Jets Do It To Themselves, Just Them… 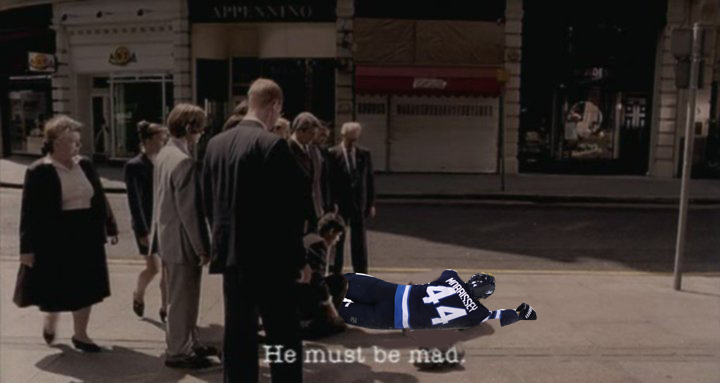 There was a point last season where it seemed like the Jets had learned. With all their talent, and all their speed, they didn’t need to “assert” themselves every night with idiocy and dick-measuring. It helped lead to their best season, and within some rotten luck of the Stanley Cup Final. The Jets finished 16th in penalty minutes per game last year. That had broken a streak of three seasons under head coach Paul Maurice where the Jets had finished no lower than 6th in penalty minutes per game. They were playing the wrong games at the wrong times. They seemed to have figured that out.

Not so this year. The Jets lead the league in penalty minutes per game, and nine players have racked up 20 minutes or more so far. They’ve racked up five game -misconducts this year, tied for the lead with Vancouver. They’re second in majors.

Jacob Trouba, Dustin Byfuglien, and Tyler Myers are the ones who seem to be most unable to get out of their own way, as their penalty-difference are worst on the team. They’re -7, -6. -6 respectively.

It would be infuriating to be a fan of the Jets and see them not want to remain at even-strength as much as they could. While they’re not the even-strength power they were last year, they’re among the bottom teams in drawing penalties and power play time. When you have Patrik Laine, you’d think you’d want to be setting him up in “the post” as often as damn possible on the man-advantage.

You could see this being a problem for the Jets down the road, where they’ll have to negotiate the Predators and possibly Sharks back-to-back, though the Predators aren’t clicking on the power play at the moment. You know what the Sharks man-advantage can do.

The Jets defense is not going to be ever be dominant. Trouba has regressed a touch, Byfuglien has only a tangental relationship with his own end. Tyler Myers just straight sucks. But it doesn’t have to be stupid. If it is, it’ll cost them just about everything.