Soooooo, yeah.  That was fun.  The Blackhawks withstood a barrage from the Calgary Flames that basically started from the halfway point of the second period.  Ray Emery was amazing, Patrick Kane once again carried the offense, yadda yadda, you saw the game.  Now to the bullets.

–Maybe it was the copious amounts of alcohol consumed in the last week but Ray Emery certainly looked quicker moving post to post than he did last year.  Not that he could’ve gotten much slower but Emery actually demonstrated a little quickness moving side to side.  One of the many cases in point from tonight: his shoot out save against Alex Tanguay.  Emery was clearly beaten but demonstrated enough reflexes to get his right leg out in time.  I feel like that was an easy goal last year.

–Speaking of, I’m sure there will be plenty of people “disappointed” with the win, in that the Hawks were fortunate to win, really had no business winning, etc. etc.  And that certainly is a justifiable opinion.  However, I will simply point to the last few visits the Hawks have made to Calgary where they were clearly outplayed and were pounded to the tune of scores like 7-2.  So I’ll simply ask, do you feel better now than you did then?

–When was the last time the Hawks were outplayed this bad and had two points to show for it?  I’d venture to guess there was a game or two in ’09-10, otherwise it was definitely ’08-09.  The last two seasons has most certainly seen the Hawks be outplayed to this degree but the results were thrashings by the opponent.  No need to relive any of the Alberta Grapings.

–Very encouraged by the defensive ice times tonight.  Niklas Hjalmarsson and Johnny Oduya were the ice team leaders with about 26 minutes played each.  Duncan Keith and Brent Seabrook both barely cracked 23.  I don’t need to ask; I know that has never happened in Joel Quenneville’s tenure.  And the ice times were absolutely warranted.  Seabrook spent the majority of the game questioning the 2nd Amendment while pucks were eluding his stick.  Duncan Keith, while not making any glaring errors, just really didn’t do much creating at all.

What made Keith so special for those two seasons was his ability to push the play, create offense, and his ever present active stick.  The difference was more evident tonight as it was hard to even notice Keith played.  I’m struggling to remember anything really of significance, other than his questionable delay of game penalty.  I’m not complaining of course because it’s better than the alternative of not creating offense and being badly outplayed on the defensive end; merely stating.

Is Joel Quenneville actually coaching with a plan this year?  Too soon to tell.

–Patrick Kane is playing with bundles of confidence right now.  While he was certainly at fault for Calgary’s second goal by getting a little too cute at the blue line, his cross-ice pass to Johnny Oduya to set up the game-tying goal was pretty incredible.  Kane navigated the pass through about four sticks en route to hitting Oduya’s right on the tape.   Oduya threw the puck towards the front of the net; Saad tied up his man and Hossa found a loose puck.  Boom.

None of that happens though without Kane’s vision.

But let’s also not forget the efforts of Marian Hossa or Jonathan Toews in that sequence.  Hossa did an amazing job of keeping that puck in the zone when it looked like Calgary was going to clear it and Toews totally manhandled a defenseman in the corner to get the puck to Kane to initiate the tying goal.

–Patrick Sharp, on the other hand, seems quite agitated these days.  The normally reserved Sharp was as aggressive as he’s been since the Hawks acquired him from the Flyers.  He had a couple of huge hits and had no problem getting into a pissing contest with Matt Stajan at the end of the second period.  The beginning of the season hasn’t been too kind to Sharp as he’s looked a bit out of sorts, so this is probably his way of battling out of this ‘slump’.

–What was the deal with Mikka Kiprusoff’s pants?  Did anyone else notice that it looked like his fly was open after Jonathan Toews’ shootout attempt?  Not sure if that was an optical illusion or what. 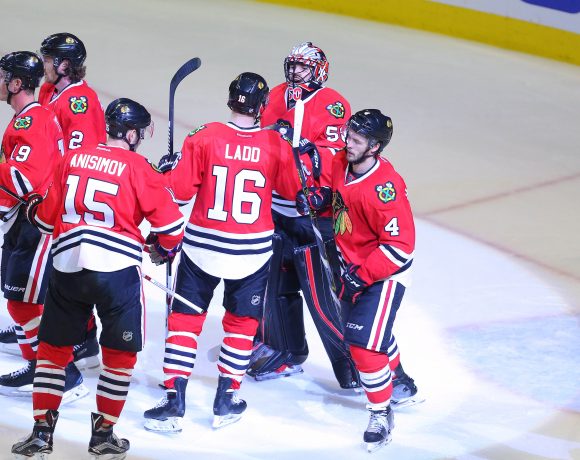 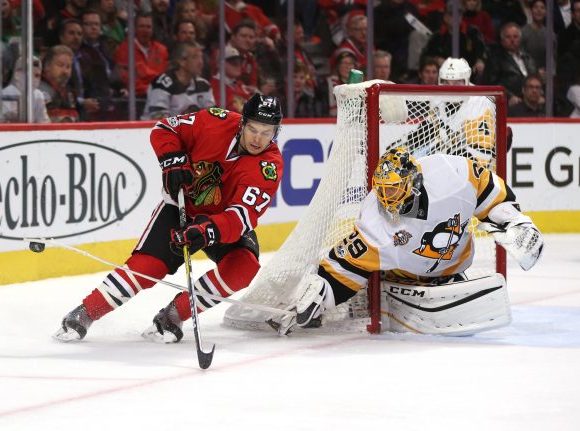