This Road Is Longer Than You Think, Hawks 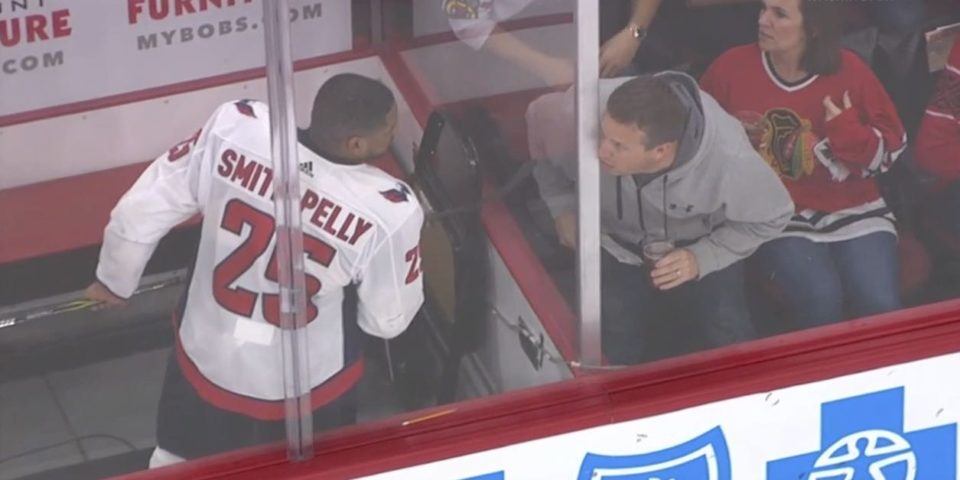 Right at the top, let me say that the Hawks and the United Center handled Saturday night’s stupidity and ugliness about the way you’d ask. They ejected the fans, banned them, and their statement hit all the notes you’d require. Getting their players in on it is a good idea as well, to try and be thorough. While I would suspect these four fucksticks were probably saying ugly shit far longer than when Devante Smith-Pelly had had enough, that’s dependent on the fans around them calling them out before then. The United Center or Hawks can’t force people to do that, and when it became obvious to everyone they did what they should.

If I could lend one quibble, it would be to release their names publicly, and give the other four teams in town the option of banning them from their games as well. This kind of ugliness should result at least in public shaming and in reality, loss of job and a few other things. You may say it’s thought police, but there are few companies and agencies and whatever else that wants to be associated with that kind of prejudice and hatred. And that’s what it is.

The problem for the Hawks here is that it’s started a ball rolling that I don’t think they’re in any way prepared for.

Because if the policy in the United Center and for the Hawks is that racism will not be tolerated in the stands,  then those who show up in full headdresses can’t be allowed on the concourses. Those two jackwagons who used to paint themselves red (and demanded free programs from me once because they painted themselves red in one of the funniest moments during my eight years standing outside Gate 3) can’t be allowed in the arena. Otherwise, what you’re saying isn’t “racism won’t be tolerated in the United Center,’ but “racism that gets caught on camera and marked out by players so that we can no longer put our head in the sand and have to act is prohibited.” That’s not taking a step, that’s not promoting tolerance. That’s just hoping you don’t have to talk about these things ever again. That’s not the way forward.

Ah, but then if you do take that step of not allowing the headdress wearers and face-painters, then you’ve basically admitted your logo has to go. Maybe the name, too. While a professional team has yet to change its name away from a Native-American connotation, you have to feel like it’s not going to be too long now. Marquette and North Dakota have, of course. While the Hawks do keep a constant line of communication and work with local groups and tribes, we could probably easily find tons that are insulted by the imagery.

The Hawks can point to Cleveland or Atlanta or Washington and say they’re waiting on them, and that Washington should have to go first because their name is an actual slur. But the “Well they’re doing it!” is not an acceptable defense. Someone is going to take the first step, and if you’re as progressive and “on the cusp” as the Hawks are desperate for you to believe they are, it should be them. We here know that’s bullshit, but hey, I’ll play their game for a minute.

Of course, what the Hawks are really terrified of is the backlash from the unwashed section of their fanbase. And for a team that’s already seeing empty seats pop up at their games, they’re probably petrified of more. But what we know is that those fans aren’t really going anywhere and will be the first to buy the new jerseys and two, they’re probably the types to spout racist shit and are the exact type of people you just said won’t be tolerated in the arena.

And yes, I’m well aware of what this blog was called for nine years, and the reaction I’ve had in the past to those who suggested I should change it. Not all lessons are learned quickly.

Basically, the Hawks have painted themselves to a corner to where they can’t half-ass this. If racism isn’t allowed in any way in your arena, and you take those steps, then they’re going to have to take all the steps. Otherwise they’re not trying to eradicate that element out of their fandom. They’re just trying to not end up in headlines and online videos.

And that’s not enough.