High On The Hog: Gotta Beat The Neighbors 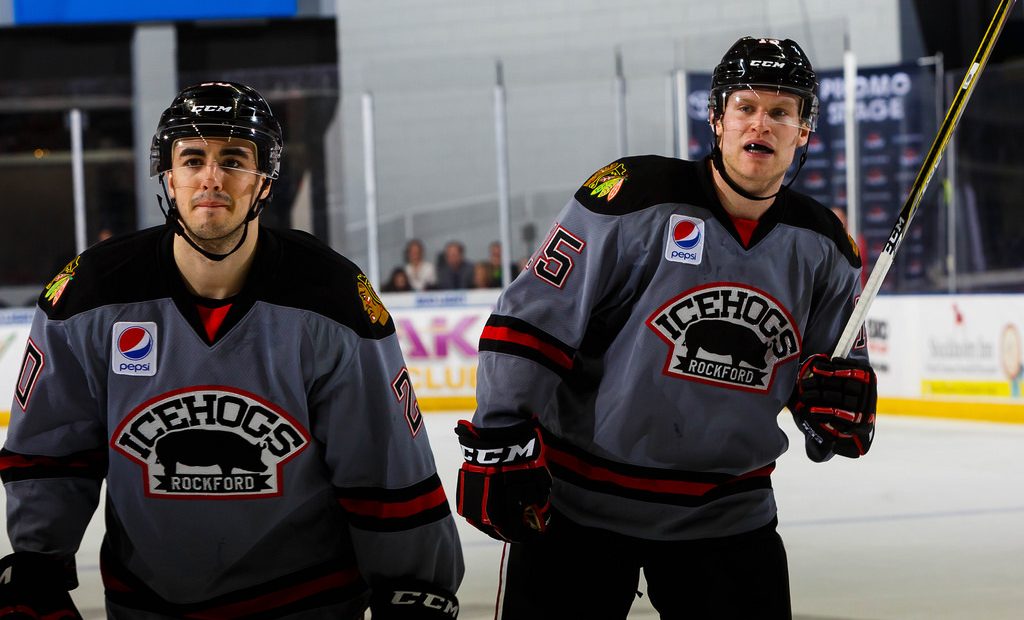 The Rockford IceHogs, much like their NHL parent club in Chicago, have been slumping hard in February. As a result, they’ve created some separation between themselves and the teams looking to secure a playoff spot in the AHL’s Central Division.

It’s the bad type of separation. The ‘Bago County Piglets may be hitting a wall in the AHL schedule. It’s coming at a rather inopportune time.

Rockford managed to snap a four-game losing streak Sunday with a win over San Antonio. The win took some of the stink off of two home losses to a weak Cleveland squad earlier in the week. The Hogs problems with the last-place Monsters goes a long way in part to explain why Rockford has plummeted to sixth-place.

The formula for success in the divisional standings is simple-beat the teams in your division. Unfortunately, this has been much easier to say than for the IceHogs to do this season.

Rockford is in its current position in the Central Division table precisely because of a poor showing among their regular opponents. Here’s how the teams stack up in inter-divisional play after this weekend’s action:

The Hogs are 6-3 against the Griffins this season. However, they have dropped the last three meetings with Grand Rapids, who currently are on a 9-0-0-2 run that has them in that second-place spot in the Central.

The IceHogs do not own a winning record against any of the other teams in the division. To make matters worse, the two games they lost at home to Cleveland this week leaves Rockford with a 3-4-0-1 mark in the season series with the Monsters. Not terrible, you say? Here’s how the rest of the loop is faring with the division cellar-dwellers:

Rockford is 3-6-1 over its last ten contests. All three wins are against teams from the Pacific Division (Ontario, San Antonio). Meanwhile, Grand Rapids is 8-0-0-2, the Wolves are 7-2-1 and Iowa is 7-3 in that same span.

Rockford can certainly work its way out of this tailspin. However, they will have to do most of the heavy lifting on the road.

Of the IceHogs 22 remaining games, just seven will be in the confines of the BMO Harris Bank Center. Rockford has consecutive games just once for the rest of the campaign when they host Milwaukee and Chicago March 23-24.

The Hogs have 14 division games left. Ten of those contests are on the road. For a team that has to rack up regulation wins against the teams above them in the standings, that’s a tall order.

There were a number of moves made last week on the roster front. Last Sunday, the IceHogs inked forward Henrik Samuelsson to a PTO. A former first-round pick of Arizona and the son of Hawks assistant Ulf Samuelsson, the big wing paid early dividends for Rockford.

Samuelsson, who had 43 points (16 G, 27 A) with Idaho of the ECHL this season, posted a goal in each of his first three games with the IceHogs. He has already worked his way into the Rockford power play mix and skated with Matthew Highmore and Luke Johnson over the weekend.

Thursday was rife with moves. Goalie Jeff Glass came down to Rockford, with J.F. Berube being recalled to the Blackhawks. Chicago also pulled the trigger on a deal with Ottawa that saw defenseman Ville Pokka depart after nearly four seasons with the Hogs.

The organization reacquired forward Chris DiDomenico from the Senators in exchange for Pokka. DiDomenico skated in Rockford from 2010 to 2012. He’s spent this season between Ottawa 6 G, 4 A in 24 games) and AHL Belleville (5 G, 9 A in 25 games). DiDomenico did not skate in either IceHogs game since the trade.

A player who did get his first on-ice action with Rockford was rookie forward Nathan Noel, who made his debut Tuesday and got his first AHL goal Sunday afternoon. Noel made it clear what style of play we should expect from the fourth-round selection of the Hawks in the 2016 NHL Draft.

Noel stood out in that he is a pesky instigating-type that is in short supply on the Hogs roster. The 5’11”, 175-pound forward didn’t seem to have any problems finishing checks or adding an extra shove around the net.

Noel was injured to start the season. He was sent to Indy when he recovered and is coming off another injured stint while with the Fuel. In 17 games in Indy, Noel had four goals and five assists. It should be interesting to see if he can stay healthy and what Noel can contribute to this team.

It wasn’t the best of weeks for Rockford. The Hogs managed to avoid being swept at the BMO, but lost two games to Cleveland before beating San Antonio. Here’s the long and the (mostly) short of it:

Terry Broadhurst potted a shorthanded goal to open the scoring for Cleveland, taking advantage of a Gustav Forsling turnover. Rockford had five power play chances on the night; the only one that ended up on the scoreboard was the one from Broadhurst’s stick.

The Hogs evened the score with Henrik Samuelsson’s first goal with the team. The new guy was camped out in the slot, took a pass from Matthew Highmore and sent it to Twineville at 16:42.

The Monsters took the lead late in the second on a Carter Camper goal, then held off the Hogs the rest of the way. Alex Broadhurst hit an empty net to lock the game up in the final minute as the brothers continued to pile up offense against their former team.

J.F. Berube was solid in his second game back from injury, stopping 27 of 29 shots thrown his way. I wasn’t enough as the Hogs dropped their third-straight.

It was another exercise in futility on the special teams. Rockford went scoreless in five attempts, including a five-minute major. They surrendered another shorthanded goal and gave up a Monsters goal on the man advantage.

After a scoreless first, Cleveland came out and scored three goals in the first 8:29 of the middle frame. The offensive outburst was capped by Zach Dalpe’s shorty past Jeff Glass, who had little in the way of help in the second period.

Back came the Hogs with a pair of goals. Graham Knott’s shot bounced off sliding defenseman Cameron Gaunce and through the wickets of Monsters goalie Matiss Kivlenieks and into the net at 12:50 of the second. Henrik Samuelsson caught Matthew Highmore’s bank shot off the end boards and scored from the goal line at the 18:38 mark.

Rockford entered the third period down 3-2. That’s as close as this one got. Cleveland scored 1:35 into the third and added an empty-netter from Terry Broadhurst with 1:02 remaining.

The IceHogs got things turned around on the power play, with a pair of first-period conversions after falling behind 1-0.

Luke Johnson drew cord after putting in a long rebound of an Adam Clendening shot, tying the game 1-1 at the 14:20 mark. Less then two minutes later, Henrik Samuelsson had the space in the slot to sling home a Cody Franson pass for a 2-1 Hogs advantage.

Tanner Kero scored from the right post to give Rockford a 3-1 lead early in the second. Less than a minute later, Alexandre Fortin forced a turnover that wound up in front of the Rampage net. Nathan Noel was on the scene to get his first goal of the season at 2:33 of the second.

That chased San Antonio starter Spencer Martin from the crease. Ville Husso came into the game and held Rockford scoreless the rest of the way.

The Rampage added power play goals midway through the second and early in the final frame. However, Collin Delia made enough stops (25 of 28) to give the IceHogs a much-needed victory.

Save My Life, I’m Going Down For The Last Time-The Hogs Head East

Rockford is on the road this weekend, taking on a pair of Eastern Conference clubs.

Friday, the IceHogs tangle with the Wilkes-Barre/Scranton for the first time since ever. The Penguins, who will visit the BMO in a couple of weeks, are 30-15-4-1 heading into this week’s play. They are led by Daniel Sprong, who is third among AHL rookies with 40 points (20 G, 20 A). Behind him is former IceHogs forward Ryan Haggerty, who has 16 goals and 15 helpers in addition to leading the team with a plus-21 skater rating.

In net, the Hogs will likely face Casey DeSmith, who has a 2.74 GAA and a .911 save percentage. DeSmith has lost four of his last five starts, though. Wilkes-Barre/Scranton has dropped its last three games heading into the match-up.

Saturday, Rockford plays in Hershey, who are in seventh-place in the eight-team Atlantic Division. The Bears have won three straight games, however.

The IceHogs came out on top in the team’s first-ever meeting at the BMO, a 5-0 win. Three of Rockford’s goal scorers on that night, Vinnie Hinostroza, Tomas Jurco and Erik Gustafsson, are not on the current roster.

The Bears have a lot of experienced skaters, including forward Joe Whitney (24 points). Hershey is led in scoring by Travis Boyd (14 G 26 A) and Riley Barber (17 G, 16 A). Former Rockford forward Jeremy Langlois is skating for the Bears this season.