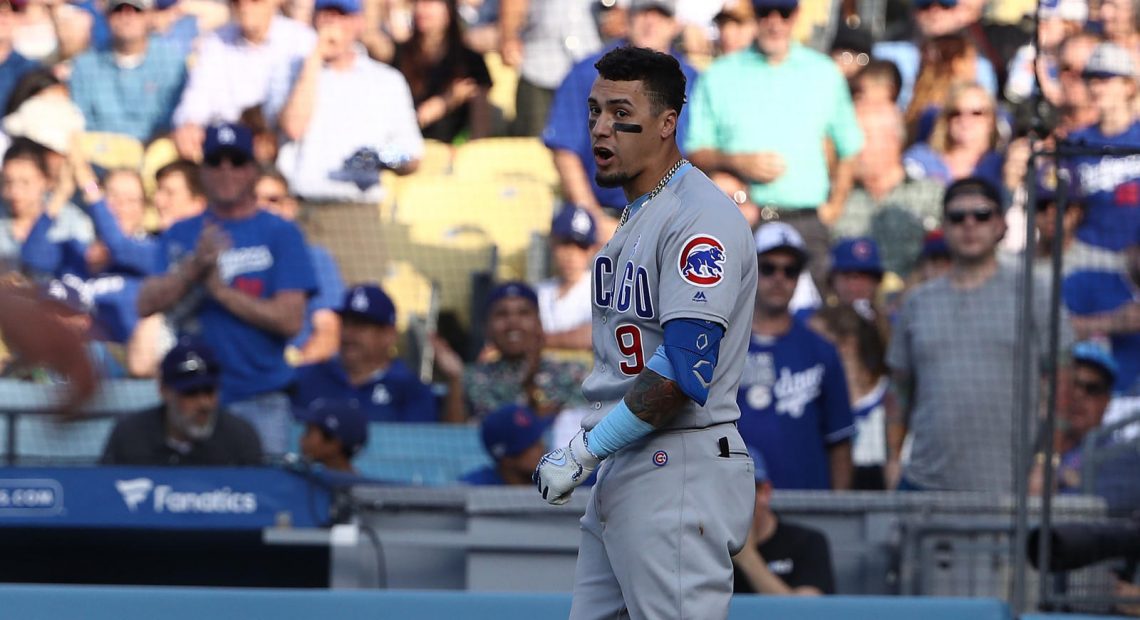 There was a chance to get out of this road trip in better health. With a record that didn’t make you wince. There were essentially three coinflips on this swing, the first game in Colorado and the last two in Los Angeles. The Cubs only got one of them, and they really have the pen to thank. Jim Deshaies was pointing out last night, before the Cubs got their first win of the season when trailing after six, that the reason that record is the way it was, and is, is that their pen can’t keep deficits down. We kvetch about the blown leads, but that’s almost as important. You saw the proof of that Saturday, though it helped that the pen was only asked to provide three outs before turning over a lead to Strop. Kimbrel will obviously help with this, but it won’t be a cure-all.

Steve Cishek is a good reliever, and it’s not like he’s getting continually shelled all season. But he does leak runs here and there, and that’s not good enough. Especially when you’re playing teams like the Dodgers where the margins are so thin. Cishek exits the game with a 3.38 ERA, which is not an embarrassment. But successful pens are trotting out relievers with ERAs under 3 or even around 1.00. The Cubs don’t have that. This wasn’t a trip of the pen having the world crash around them. Cishek twice, Montgomery once let runs just leak in. Get those two wins and suddenly it’s a 4-3 trip and that would be a success. On such margins are things decided.

Losing three of four to that team that’s 23-4 in its last 27 homes games doesn’t make this team a failure or anything resembling. And who knows what each could look like come October. But it does plant a seed of doubt about how the Cubs would find a way around that monster. Even a pen augmented by Kimbrel and one or two more arms is not automatic to get through that lineup. And remember, they didn’t have Seager either. And the Cubs can’t think about October when they’re still a game back and merely seven games over. There’s a lot more woods here.

The Cubs have built a really good team, and one that very well might get better. It just might have been timed to keep running up against a team that’s just better in just about every area.

Anyway, let’s run it through.

-If Albert Almora didn’t run like old people fuck, the Cubs tie that game or maybe even win it. I’ll never be not amazed at how he can be such a good center fielder, which he is, and be that slow. Oh well, he is what he is so this is shouting at the rain.

–Cubs Insider ran a pretty interesting piece on why Jon Lester can’t seem to get his change-up to be that effective. It was definitely a problem on Thursday night, and you can’t get through this lineup with two pitches.

-You’re never going to feel comfortable about a pitcher going on the IL with shoulder inflammation, as exciting as getting a look at Adbert Alzolay will be. If that’s the route the Cubs go, that is. It feels like if the Cubs are truly careful with Hendricks, he’s going to miss three or four starts. This is not something you want to fuck with.

-Still, Anthony Rizzo kept this from becoming a complete disaster, and who knows how big that homer could be down the road.

-The only Dodgers starter the Cubs got out before the 7th inning was Clayton Kershaw, which is something.

-Baez is definitely slumping. His line-drive rate is down to 11% in June and his hard-hit rate dropped 13 points from May. And he hasn’t walked once. He’s never going to walk much but he at least did it enough in the season’s first two months to let pitchers know he was capable. He’ll have to get back to that, and he will.

-Hopefully this is a springboard for Darvish, and it should be. An awakening will soften the blow of Quintana struggling to find it right now and any Hendricks injury layoff. One walk in his last two starts is highly encouraging.

-You’ll never convince me Dave Roberts has any idea what he’s doing, and the 6th inning was an excellent example of that. Getting one more inning from Ryu was hardly worth leaving him in to bat with one out when you can take the lead. And then you know that the Cubs are going to bring in a lefty to face Pederson, which is hardly better than Hernandez facing Kintzler right now. Should have taken more advantage.