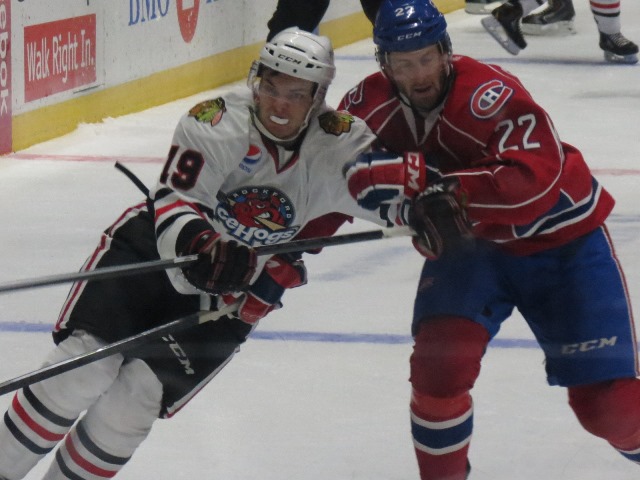 Week 18 of the AHL schedule featured the IceHogs traveling to New York for two games against the Rochester Americans and the Utica Comets. It was then back at home for Rockford to kick off week 19 with a contest against the Hamilton Bulldogs.

Friday’s match-up saw the IceHogs take on the Rochester Americans. After a scoreless first period, the Americans picked up three goals in the second period and one around the halfway mark of the third period to give themselves a 4-0 lead. Philippe Lefebvre broke Matt Hackett’s bid at a shutout at the 12:03 mark of the final frame to make it 4-1, which is how the final stood.

-The Americans outshot the IceHogs 33-24; Jason LaBarbera was in net for Rockford.

-The IceHogs did not convert on any of their three power plays and the Americans tallied on one of their four man advantages.

Saturday’s game saw the IceHogs start the month of February off on the right foot. After falling behind 1-0 28 seconds into the game courtesy of a goal from former IceHog Pascal Pelletier, Rockford found a way to battle back. At 2:05 of the first period, Pat Mullane tied the game with his fourth goal of the season. The next marker didn’t come until 10:33 of the second period when Brandon Mashinter put the Hogs up 2-1. With the help of Kent Simpson in net, the Hogs were able to hang on for the victory.

-The IceHogs did not score on their lone power play of the game. The Comets converted on one of their five man advantages.

Tuesday’s game at the BMO Harris Bank Center against the Hamilton Bulldogs featured ten goals. Luckily for the IceHogs, they scored the majority of those ten goals. With markers from Terry Broadhurst, Joakim Nordstrom, Brandon Mashinter (PPG and ENG), Alex Broadhurst and Mark McNeill (GWG), the IceHogs took the game 6-4. Hamilton came back from being down 2-0, 3-1, and 4-2 to tie the game up at four in the third period. The Hogs were able to buckle down with 4:31 left and get the lead for good.

-The Bulldogs outshot the IceHogs 25-24; Jason LaBarbera was in net for Rockford.

-The IceHogs were able to convert on only one of their four power plays whereas the Bulldogs scored on three of their six man advantages.

-Former IceHogs captain Martin St. Pierre played in his first game back in Rockford since last season. He recorded an assist and was -1 for Hamilton.

–Jason LaBarbera was given the secondary assist on Brandon Mashinter’s empty net goal.

–Adam Clendening played very well defensively against the Bulldogs on Tuesday. He used his stick very effectively in the defensive zone and broke up a lot of good chances for Hamilton. His good defense turned to offense as he was +4 on the evening and also picked up two assists.

–Brandon Mashinter continues his fantastic play for Rockford. In the past three games, he picked up four points (3 G, 1 A) and is +1.

–Alex Broadhurst has also played some good hockey for Rockford. In the past three games, he has three points (1 G, 2 A) and is +2. He seems to be way more comfortable now with his role on the team as a third line center as he has been playing with Terry Broadhurst and Mark McNeill.

–Mark McNeill also had a good game on Tuesday night. He picked up the game winning goal and two assists and was effective in all three zones in all situations.

-The IceHogs now have a record of 22-21-4-2 (50 points) and sit in eighth place in the Western Conference standings.