Pigs in Zen: IceHogs Keep Racking Up the Points 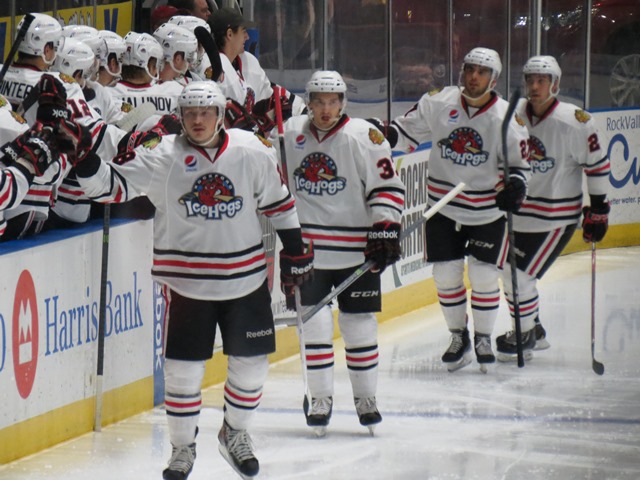 The IceHogs faced a 3-games-in-3-nights set this past weekend as they took on the Oklahoma City Barons in 2 contests at BMO Harris Bank Center then traveled to Iowa to take on the Wild.

Friday night’s contest resulted in a 4-3 IceHogs victory as goaltender Mac Carruth picked up his first AHL win in net. Brandon Pirri, Brad Winchester (x2) and Garret Ross all tallied in the victory. The win didn’t come without a loss though as defenseman Viktor Svedberg suffered a lower body injury during the tilt.

-Rockford and OKC both fired 30 shots on net and both teams didn’t score on any of their 3 power play opportunities.

–Mark McNeill led the Hogs with 4 shots on goal.

Saturday’s contest at the BMO was a back-and-forth affair. Once one team would score, the other would find a way to tie it up. Philippe Lefebvre tied the game for Rockford in the 1st and then Joakim Nordstrom scored the go-ahead goal, but OKC tied it up with 45 seconds left in the period. Mark McNeill and Derek Nesbitt traded goals in the 2nd period and then Terry Broadhurst and Martin Marincin swapped tallies in the 3rd period to send the game into overtime and then a shootout. Nordstrom, Brandon Pirri and Broadhurst all tallied for Rockford in the skills competition and netminder Mac Carruth didn’t let any pucks past him to give Rockford the 5-4 victory.

–Terry Broadhurst led the Hogs with 6 shots on goal.

–Brandon Mashinter recorded his 1st point with the IceHogs as he assisted on Joakim Nordstrom’s power play goal in the 1st period.

–Mark McNeill’s goal in the 2nd period came on the 2 man advantage.

-The lines and D pairs were:

Sunday’s contest didn’t exactly go the way the IceHogs would’ve liked as they fell to the Wild 3-1. Defenseman Klas Dahlbeck scored the lone marker for Rockford in the 2nd period. Goaltender Allen York made his 1st start for Rockford and made 35 saves.

-Iowa and Rockford both fired 38 shots on net.

-The IceHogs were scoreless on all 4 of their power play chances and they killed off all 7 Wild man advantages.

–Garret Ross led the IceHogs with 5 shots on goal.

–Mac Carruth played a very good game on Saturday evening and came up big for the IceHogs late in the game. One save in particular came in the final minute of overtime where he smothered a shot when the Barons player was left all alone out in front of the net.

–Brandon Pirri continues to be used in all situations now that he’s back in Rockford; he also recorded 2 assists on Saturday night.

-The IceHogs currently have a record of 15-12-2-0 (32 points) and are in 5th place in the Western Conference standings. Milwaukee is behind them in 6th with 29 points and 5 games in-hand… This makes Saturday’s game against the Ads that much bigger.

Saturday, December 21 vs. Milwaukee at 7 pm