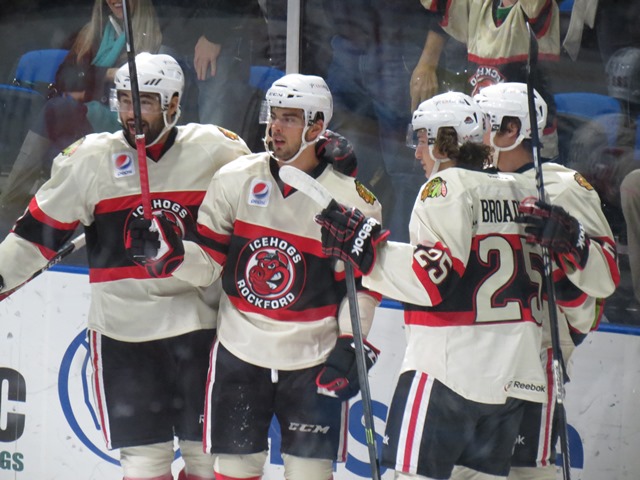 Boxing Day was not a very good day for the IceHogs as they dug themselves a hole before the halfway point of the opening period and could never climb out of it. Kent Simpson made 25 saves and the Hogs recorded goals from Garret Ross (shorthanded) and Brandon Mashinter (his first in a Rockford uniform), but the Hogs fell to the Iowa Wild 5-2 in Des Moines.

-The IceHogs didn’t score on any of their 4 power plays and killed off 3 of Iowa’s 5 man advantages.

The following day, the IceHogs were back at the BMO Harris Bank Center as they took on the Grand Rapids Griffins. The IceHogs battled back every time the Griffins went ahead on the scoreboard, but they couldn’t manage to do it in the 3rd period and the Griffins took the contest 4-2. The game winning goal was a power play tally. Jared Nightingale (his 1st of the year) and Brandon Pirri (only his 2nd of the year) scored for the IceHogs; Mac Carruth made 26 saves in the loss.

-The IceHogs didn’t score on any of their 6 power plays and killed off 4 of Grand Rapid’s 5 man advantages.

On Monday, December 30th, the IceHogs hosted the Charlotte Checkers at the BMO. Unlike the last 2 games, the Hogs got on the board first, courtesy of Brandon Pirri’s 3rd goal of the season. The Checkers scored late in the 1st period and early in the 2nd period to take the lead in the contest, forcing the Hogs to play catch-up yet again. The Hogs did catch up as Brad Winchester scored a power play goal 26 seconds into the 3rd period. Just over 2 minutes later, the Checkers regained and took the contest 3-2.

-Rockford outshot Charlotte 43-40; Kent Simpson was in net for Rockford and made 23 saves. After the Checkers’ go-ahead goal in the 3rd, he was pulled in favor of Mac Carruth, who made 14 saves.

-The IceHogs scored on 1 of their 6 power plays and killed off 3 of 4 man advantages for Charlotte.

-IceHogs center Brandon Pirri was injured towards the end of the 2nd period. It appeared to be a lower body injury.

Friday, December 27 – IceHogs forwards Pat Mullane and Maxim Shalunov were both sent down to the Toledo Walleye (ECHL).

–Jeremy Morin hasn’t been playing bad, but he has been extremely snakebitten. He’s been getting pucks on net and creating chances in the offensive zone, but they just haven’t been going in for him. He recorded a secondary assist on Monday night, but before that, he hadn’t recorded a point in his last 6 AHL games.

–Brandon Pirri had scored 2 goals in his last 2 games since not potting one since December 13th. If he’s out for any amount of time, that really doesn’t help the IceHogs in their chances of snapping their 6 game losing streak.

–Byron Froese played an extremely good game on Monday night. He was flying around the ice, banging bodies, being effective on the penalty kill and taking numerous face-offs. He has 5 points this season and is +1, but he is still looking for his 1st goal of the year.

–Mac Carruth’s 14 saves on Monday night featured a lot of good ones and kept the IceHogs close in the game in the 3rd period.

-The IceHogs now have a record of 15-16-3-0 (33 points) and have fallen out of a playoff position—yes, I know it’s still early—in the Western Conference. They currently sit in 9th.

Sunday, January 5 at Chicago at 3 pm