Pigs in Zen: Ad-ing Up the Points 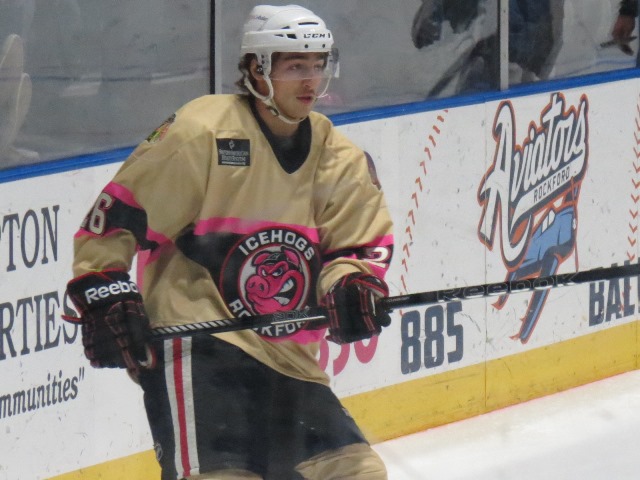 The end of week 17 of the AHL schedule was packed for the IceHogs has they had to play three games in three nights—all against the Milwaukee Admirals. With Milwaukee having four games in-hand on the Hogs, it was very important for Rockford to grab the majority of—if not all of—the points at stake.

Despite jumping out to a 1-0 lead on a power play goal from Mark McNeill towards the end of the first period, the IceHogs were not able to grab a win on Friday night in Milwaukee at the BMO Harris Bradley Center. The Admirals scored once in the second period and twice in the third to make it 3-1. Brandon Pirri scored a shorthanded goal with about five minutes left in regulation to bring Rockford within one, but the Ads held on for the 3-2 win.

-The Admirals outshot the IceHogs 36-30; Kent Simpson was in net for Rockford and Marek Mazanec was between the pipes for Milwaukee.

-The IceHogs scored on one of their three power plays and killed off all three Admirals man advantages.

Saturday night’s match-up between the IceHogs and the Admirals was at the BMO Harris Bank Center in Rockford for Pink in the Rink night. The Ads got on the board first with a beautiful goal from Vinny Saponari with just over three minutes remaining in the opening frame. After an hour delay due to the poor pink ice conditions that needed to be fixed and 16 minutes into the sandwich stanza, the Hogs tied the game on a Brad Winchester tip of a Brandon Pirri shot to tie the game at one. Brandon Mashinter scored the winning goal for Rockford with 3:09 remaining in regulation on a 2-on-1 rush with Garret Ross. This put the Hogs up 2-1 for good.

-The IceHogs scored on one of their four power plays and killed off Milwaukee’s lone man advantage.

The IceHogs were back up in Milwaukee to finish the weekend on Sunday. Alex Broadhurst was able to tie the game at one late in the first period with his eighth goal of the season. Milwaukee was able to score twice in the second though in order to give the Ads a 3-1 lead. Jeremy Morin tied the game early in the third period for Rockford as he scored two goals that came 23 seconds apart. This sent the game into overtime where Adam Clendening tallied with 21 seconds left to give the Hogs a 4-3 victory.

-The IceHogs were not able to convert on either of their two power plays and the Admirals scored on one of their three man advantages.

-Wednesday, January 22 – The IceHogs sent defenseman Bobby Shea to the Toledo Walleye of the ECHL.

–Adam Clendening had not been playing the greatest hockey for a little stretch which resulted in him being a healthy scratch on Saturday. The next night, he was back in the line-up and scored the game winning goal in overtime, so he obviously received the message. Hopefully Clendening can right the ship and get back to playing the good hockey he’s capable of playing—in all three zones.

–Brandon Mashinter continues to play some good hockey for Rockford. The way he utilizes his size opens up space for his linemates to make plays and he also makes an effort to be at the front of the net.

–Brandon Pirri played in his first three games since being injured on December 30th against the Charlotte Checkers. He seemed to play well:  he scored in his first game back and recorded two assists in his second game back. He saw a little bit of penalty kill time, along with substantial time on the power play.

–Jeremy Morin finally potted his first goals since January 11th on Sunday. It’s not like he has been playing poorly. He’s been playing fine but the pucks just haven’t been going in for him. He’s always around the net and getting good shots off, regardless of how the game is going overall. Hopefully for Morin, the monkey is now solidly off his back and he’ll have the confidence to score more consistently for the rest of the year.

-The IceHogs now have a record of 20-20-4-2 (46 points) and sit in seventh place in the Western Conference Standings.

Tuesday, February 4 vs. Hamilton at 7 pm