One Out Of Three Is Only Good In Baseball 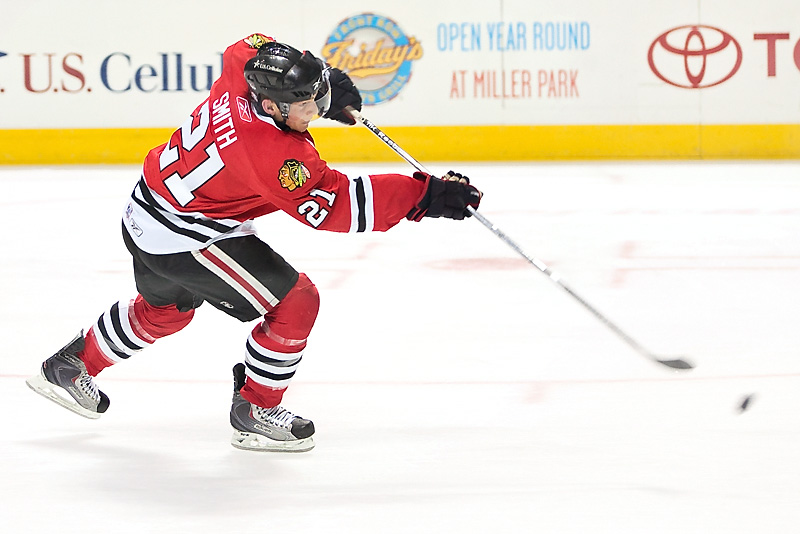 The Hogs embarked on their first three-in-three stretch this past weekend. And it didn’t go so well. One win, two losses, and out of first place to Grand Rapids. You would have wanted more.

It started out ok. Friday night saw the return of Yippy Carter Hutton, who three second period goals on six shots from Milwaukee in the second period. That canceled out a pretty Rob Flick opener,  where he came down the right wing – his off-wing – cut to the middle and blistered one past Jeremy Smith.

And then it went nuts in the 3rd period. The Hogs exploded for four goals, two of them Ben Smith deflections on the power play. Brandon Pirri added another one, and Marty St. Pierre finished it off with an empty-netter before raising his long stick in the air and knocking out a couple light bulbs.

Then it went pear-shaped.

The Wolves came in on Teddy Bear Toss night, and stole the energy. After playing a pretty disciplined game against the Admirals, only surrendering one power play, the Hogs gave the Wolves eight of them. It started out ok with Kyle Beach mirroring Flick’s effort from the night before.

But after that the Hogs didn’t muster much of anything, constantly stunting their own momentum with another jackass penalty and two minutes on the kill. The Wolves only gave up three, and didn’t let Rockford cash in on any of them. And they walked away 2-1 winners.

Sunday afternoon in Grand Rapids. Sounds lovely, doesn’t it? The Piggies were always up against it having to go on the road for their third consecutive game and in the afternoon no less. It was no surprise then that they looked sluggish in the first two periods, and were pretty well outplayed by the Griffins to a tune of 3-1. But a series of Griffin penalties late in the 3rd, giving the Hogs two two-man advantages in a row, gave the Hogs a lifeline. Marcus Kruger pulled one back off a rebound, and Rockford was still on the PP when the puck dropped after that with the goalie pulled.

But Kruger then attempted an asinine cross-ice pass to Leddy just inside the Grand Rapids zone. It was picked off, and you know where it goes from there.

-It’s pretty simple. When the Hogs are ruthless on the power play, they win. When they aren’t, they don’t. Two PP goals on Friday – win. One PP goal in the next two games – two losses.

-Ben Smith is on fire, so it’s a shame that Jesse moved on to the Cubs beat. He’s got five goals and six assists in his last eight games.

-Dylan Olsen was actually brought back into the lineup on Sunday. He went -3. So that’s nice.

-Clendening continues to impress, if not always dominate. Really effective on the power play. Don’t worry, he’s not going to usurp Nick Leddy any time soon, but he’s at least giving the Hawks another NHL-option one day, probably next year.

-The Hogs continue this week by traveling up I-94 (well, maybe that’s not how you get to Milwaukee from Rockford) to face the Admirals on Friday before returning home on Saturday to host the worst team in the league, the Hamilton Bulldogs. Tinordi’s kid is a Bulldog. That’s about it.