Life Goes On, Time Rolls On – Hawks Take 3 of 4 Points This Week 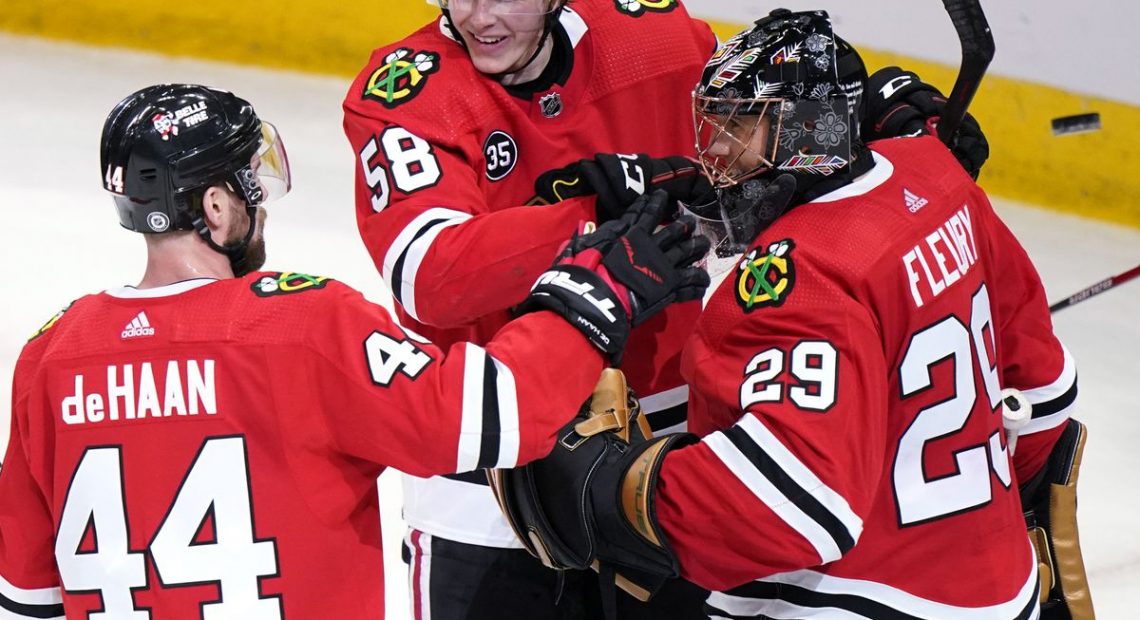 Even with a game cancellation in Edmonton, the Hawks had an easier stretch of schedule to extend their winning streak, what with the Ducks skidding and not fully healthy and the Kraken turning out to be a regular expansion team that isn’t very good. Though we lost to the Kraken in overtime, the Hawks have Marc-Andre Fleury in net which means we can pick up 3 of 4 points on the week.

The Blackhawks must feel mighty good blanking the Ducks with a COVID-decimated roster that did not include…breakout 20-goal scorer Troy Terry? But a win is a win and they looked good doing it. The Hawks put on pressure early on with some pretty solid chances, including a vintage Kane breakaway opportunity that seems to be getting rarer and rarer these days. Then a hooking call put him in the penalty box, which wasn’t great.

Overall, however, the Hawks were peppering the Ducks with chances, kept pucks in the offensive zone—all despite the numbers saying possession was about even throughout the game. The Hawks looking so good probably had to do with Fleury standing on his head to net his 70th shutout.

Lukas Reichel showed flashes, though he was ultimately stopped by the opposition with most of his chances in the o-zone. He wasn’t terrible in his own end, either, blocking a shot early in the 2nd period. Of course he got sent back down solely because of The Almighty Dollar, which is probably fine because this season is down the tubes anyway.

The Hawks didn’t score until the second period, when Gustafsson (right out of the box) set up Hagel after the Ducks had a myriad of scoring opportunities they somehow didn’t convert on at the end of their powerplay. The Hawks powerplay, though still bad, did finally convert in the 3rd period, as Kane and the Cat made it happen yet again with some great passing. Kubalik scored the empty-netter to end it with just three minutes left in the game.

The Hawks saw a lot of pressure from the Kraken to begin this game, which shows with their horrific 19.05 CF% in the 1st. The Hawks were spending the whole first period in the defensive zone, getting drilled physically and not being able to control the puck. Luckily for them the shots on goal were pretty even throughout and Fleury was once again saving every shot with his usual acrobatics in front of the net.

The Hawks looked a bit better in the 2nd with a few good chances and less time in their own zone. The powerplay continued the game-long trend of being complete buffoonery, as the Hawks were unable to get a shot on net it seemed in the 1st period and just a few meager powerplay chances in the 2nd. Luckily a Kubalik breakaway shortly after the powerplay put the Hawks up 1-0, though that lasted only a few minutes before the Kraken scored a weird tip-in goal that no one on the ice seemed to see.

The Hawks scored their last of the game nearing the end of the 2nd period with Brandon Hagel getting set up by The Cat. Kubalik was back on the ice, too, right at the net where he needs to be. I hope his hot streak continues.

The Kraken were able to tie it up in the 3rd with help from Amy’s Youngest who knocked over Fleury at just the right time for the puck to sail into the back of the net. The overtime was a horrific slog despite all the Fleury acrobatics, and the Kraken became the winner of the meaningless shootout on goals by Ryan Donato and Joonas Donskoi.

Seth Jones will make his return to the lineup this weekend in a home-and-home against the Wild on Friday and Saturday. The Wild are clinging to a wild card spot who just recently got Kirill the Thrill back from injury, so they should be a challenge for the Hawks. Read more about it tomorrow.