Let’s Talk About Tim Anderson Because We Need Fun 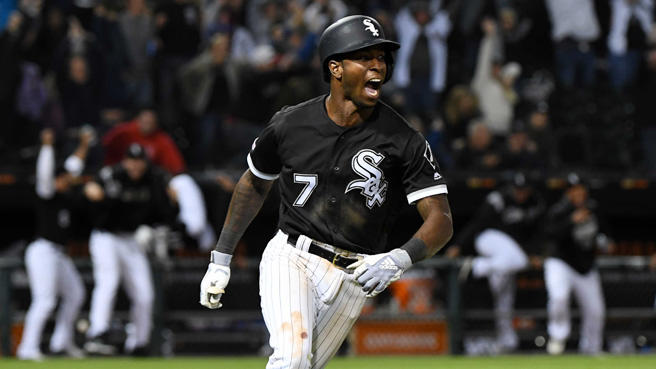 I think we can all agree that Tim Anderson’s emergence goes just a little bit beyond the field, and it goes into areas that I’m probably not qualified to talk about. Not only could the White Sox seriously use this season from Anderson being real and repeated, so could all of baseball. It’s been a ride so far,  that’s for sure.

Strictly as a player, and as a batter more to the point. Anderson is the type of player that used to piss me off. Not for his brashness, because I’ve always loved that as someone who has no swagger to him at all, but his undisciplined ways. As basically a zealot of Moneyball, I looked through glares and furrowed brows at any player who didn’t walk or even take a pitch, Anderson would have been one I would have been waving garlic at or something. Of course, if he were a vampire that would only make him cooler but that’s a much sillier discussion to have. Anyway, given Jim Hendry’s ways you can see why I was probably the most miserable Cubs fan on Earth, and that’s saying something.

Over the past couple years, I’ve grown to appreciate players like Anderson who look at our narrow vision of what an approach at the plate should be (or did), stick one finger up at it, and then go about it the opposite way. There was probably a time I would have looked at Javy Baez crossly as well, but he’s another who decided he was going to swing at even more pitches, and simply get to more of them and that’s how he would increase his numbers. As both Anderson and Baez are having their best seasons, certainly what’s become clear is that there are a few ways to skin a cat. If you’re a sick fucko, that is, because who else would come up with that phrase? Seriously.

Anyway, Anderson. He did raise his walk-rate last year to 5%, which is just about something you’d notice. But that’s clearly not for him this year, as he’s swinging at more pitches out of the zone, inside the zone, so yes, overall. And he’s making more contact on pitches outside and inside the zone than he ever has. So it’s not a huge surprise that he’s seeing less and less pitches inside the zone than he ever has, or getting less first-pitch strikes than before. It’s how these things go. Hasn’t mattered all that much, or it didn’t in April. But the theme of the day seems to be parsing out players struggling in the month of May, so here we are.

Clearly, Anderson’s May is not as good as his April. Whereas he had a .425 wOBA in the opening month, that’s cratered to .294 in May. Yes, he’s not getting nearly the rub of the green in May, but a .302 BABIP isn’t unholy. Let’s see if we can get to the bottom of this other than luck. Because Anderson never hit the ball hard enough to get that much luck, and probably needs to live with this kind of fortune.

One oddity of Anderson’s season is that he hasn’t hit the fastball well at any time. In the season’s opening throes, he hit .296 on fastballs, which is barely ok, but slugged the same exact number, which is hardly so. Anderson made up for that by hitting everything else into oblivion. .467 average and a .733 slugging on sinkers, .400 on changes, and the big improvement from previous seasons was inhaling and spitting back out sliders to the tune of a .435 average and a .738 slugging. Those last two numbers were far more than he’s ever done before.

Well, Anderson is still seeing the same percentage of fastballs, but it’s getting worse. He’s hitting .158 on them in May, while maintaining good-to-great averages on pretty much everything else. Again, like we did earlier today, has the location where he’s getting those fastballs changed? Sure looks like it: 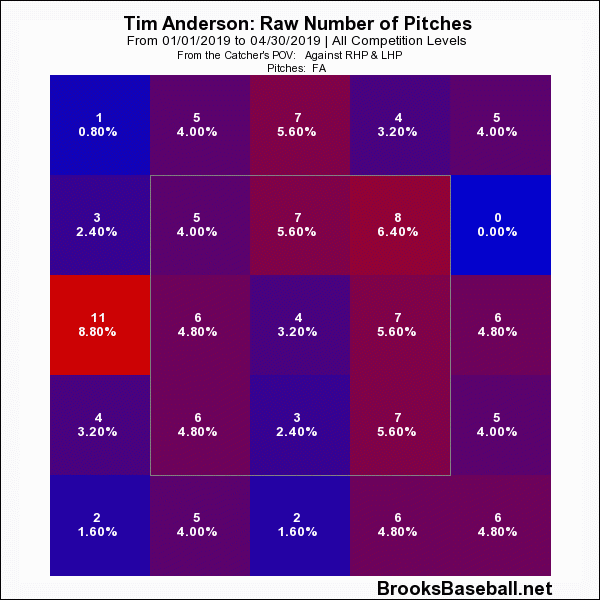 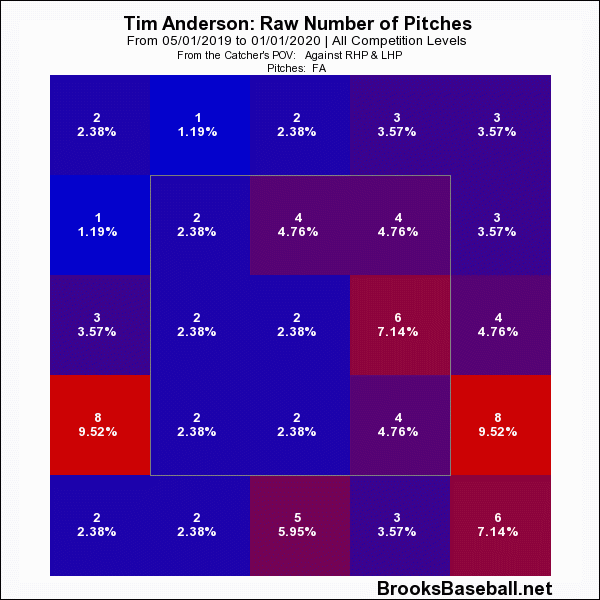 Pitchers are going away from Anderson more, and to his credit he’s gone the opposite way more as well in May (21% in April, 35% in May). The problem for Anderson is when going the other way he just doesn’t have much pop, at least not this year. He’s got a 20% line-drive rate when going to right field, which is down significantly from last year but in line with his first years on the Southside. He’s got a decent enough 25% line-drive rate when going the other way, which is what he’s had in every season in the majors. But he’s slugged .371, with an ISO of .086 when going to right so far this year, and until that improves, that’s where pitchers are going to go at him. But it’s in him, because he’s slugged over .550 in the previous two seasons when doing that.

Anderson has seen big gains when pulling the ball this year, along with getting it in the air more. But it didn’t take pitchers long to see that came at the cost of what he used to do well. Now we see if he can combine the two.