It's All Happening: Hawks at Scum Jr. Preview/Pregame Thread/Queen's Jubilee

It’s all going down in downtown St. Louis tonight (and I don’t mean that in the usual sense, the residents doing so for meth). Within a mile of each other, the Blues will take on the Hawks and the Cardinals will be engaging in a Game 5 decider against the People’s Champ Pirates. Where are all the trailers and carriages going to fit?

I’ll leave the baseball for other people (THIS IS YOUR TIME, CUTCH!!!) and just deal with the hockey. While I find it’s generally better to slowly wade into the hockey season in October and not really amp up the energy and emotion until there’s snow on the ground, there’s always one or two games that remind you of the coming storm. Tonight would obviously be one of those.

The Great Nuisance to the south and west have gotten off to a good start this season, catching Pekka Rinne on an off-night and then blitzing Tim Thomas and the Panthers at home as well. They have a couple new additions in Derek Roy on the 2nd line, Brenden Morrow huffing and puffing before his bones turn to dust on the bottom six, and human shingle Maxim Lapierre. If there was anything Lapierre was more than a Canuck, it’s a Blue. How fucking perfect.

For me, the player to watch is Jaden Schwartz. He’s been promoted to the top six to replace the increasingly ineffective and increasingly dumb David Perron, which is where he’s always belonged. He’s got three points in two games and could be the break out player down there. On the top six he’s really the only one with some flash instead of a blunt-instrument type, and is probably already the Blues best playmaker.

Of course, the Blues strength is the blue line, but I refuse to believe that any unit that contains Barret “I only just discovered light switches aren’t magic!” Jackman and Roman The Circus Bear is a strength. Yes, Pietrangelo and Shattenkirk are awesome, and Bouwmeester has never been the liability that people like to pretend he is. It’s a great top pair, but at some point Shattenkirk can’t cover for Jackman all the time, no matter what kind of contract or Olympic spot he might be playing for.

In goal, Jaro Halak has gotten both starts before he gets hurt again, so I would assume he would go again tonight.

As for the Hawks, by the looks of it Jimmy Hayes will draw back in over Ben Smith, because somehow Bollig and Nordstrom have become untouchable. Nordy is going to be in deep tonight, as this will be by far the most physical test he’s seen. How he handles it will go a long way to determining how long he stays up here. Sheldon Brookbank also looks likely to get his first game of the year, so duck. Q will keep Bollig and Brookbank in there tonight to falsely “police,” because a pointless Bollig-Reaves fight is for sure going to keep Backes from charging half the ice-rink to boulder into whatever he targets.

You know this story. It seems like every October, the Hawks go to Crud Town With All The Crud Rocks, and the Blues treat every game against the Hawks like it’s the last one they’ll ever play. But because it’s October, the Hawks don’t really want to deal with all the bullshit and kind of just let the game pass them by. Then they go back in December with a point to prove and use all the space and penalties the Blues provide by trying to prove their “manhood” and smack Scum Jr. around. I’ll use last year’s double shutouts there to prove my point.

That’s not to be defeatist, because this is an excellent opportunity to roll out that defending champs swagger that the Hawks haven’t quite shown yet. I don’t expect the Hawks to bring it every game early in the season, but you know in years past this would one where Detroit would roll out the A-game and stomp a pretender to the throne. Let’s see if the Hawks have it in them to rise above the noise and mess that’s surely coming at them this early in the season.

You can write the script from memory now. The Blues will continually chip pucks behind the Hawks defense and make them turn around to get it, making them targets for the ICBMs they turn into on the forecheck in the hopes of a turnover. The Blues won’t turn down a check anywhere on the ice tonight, hoping to push the Hawks right out of it. But in that frenzy they’ll take penalties, they’ll leave open spaces, and they still don’t have the speed to keep up if the Hawks take what’s behind them. Clean, quick, short passes out of the zone, and suddenly you have chances to beat Jackman and Circus Bear and Leopold! Leopold! to the outside (oh, and Pietrangelo too, because as good as he is he’s not a great skater).

Oh, and there’ll be a lot of narrative about how this is now the new rivalry in the Central and the Blues will replace Scum in the dark places within us of hate. That takes time. Until they prove otherwise, the Blues have generally been more an annoyance than a true rival. Two banners in four years still make them so. TALK TO ME WHEN YOU’RE ON MY BLOCK, MERCURY MORRIS.

That about does it. Let’s Go Bucs! I mean… Hawks. Let’s Go Hawks (though a Pirates victory is far more important than a Hawks one tonight, let’s be honest) 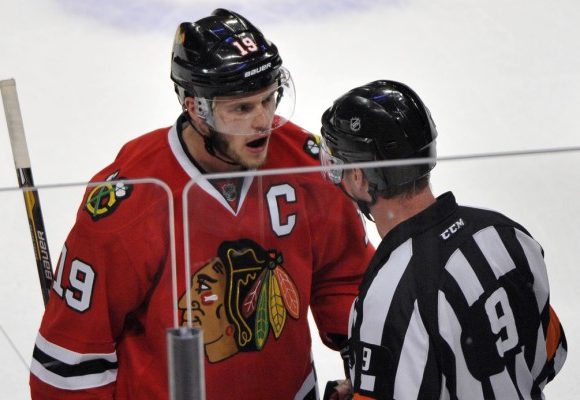 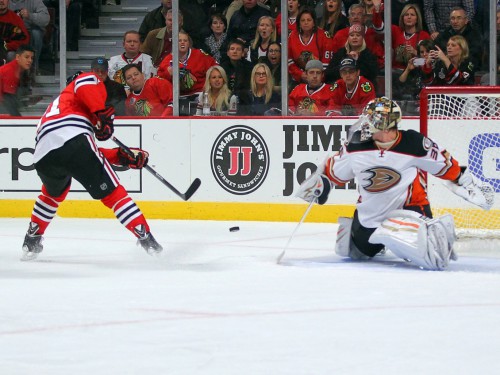