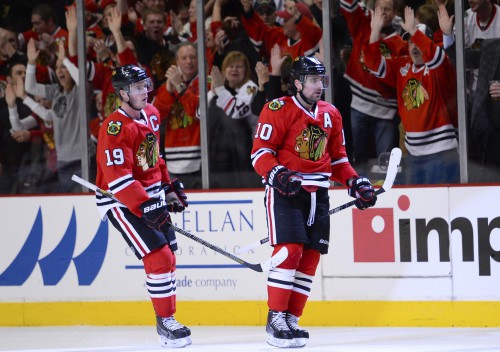 It doesn’t really get too much simpler than that.

Sure, the Devils equalized in the 2nd, and then pulled within one in the 3rd. Was anyone worried? Didn’t think so. While the Devils certainly work awfully hard and they do their best to close down whatever space there is, they simply couldn’t keep up with the Hawks. Nor could they really create much on their own, and the Hawks didn’t give them much. Throw in a couple goofy/bad goals from The Ginger, and only 12 shots against, and you have just about as assured a performance heading into the Christmas break as you could ask. Let’s get to The Two Obs.

The Two Obs: Observation and Objectivity

-Ok, I want to get this done at the top. These days, it’s utterly predictable when they show the soldier’s family that he’s going to surprise them by actually being there. And I don’t care. I’m a fucking sucker for it every time and definitely had to clear my throat and wipe my eyes when the Hawks did it for a serviceman at the first TV timeout. Part of the reason why I fucking love it when some yahoo dipshit says people like me don’t support the troops. Of course I do, and I do so much I wouldn’t send them off to some godforsaken rock without good cause. Anyway, that’s all.

-Right, hockey. I don’t know how much there is to say. Kris Versteeg is starting to look more and more comfortable now that he knows what’s being asked of him. He did spend his first couple weeks bouncing around lines. While I still don’t think he’s the best foil for Kane, it’s working now. And his work and pass to Leddy that led to Kane’s goal was just sick.

-I thought we’d told teams what happens when you give Bryan Bickell the 10 minutes to wind up that wrister. Apparently the Devils don’t read this. Strange. (actually, I have it on pretty good authority that Martin Brodeur has seen The Indian program version and loves it. So take that!)

-Kane has another even-strength goal when Handzus wasn’t on the ice. Sure it’s a coincidence? Or is it?

-As you might imagine, the Corsi%’s are stupid. The only ones to be under water? Kostka, Bollig, Kruger, Smith. I feel like I’m taking crazy pills here! You know what’s best about that is Kruger’s line got it handed to them tonight by not even the Devils top line but by crypt-escapee Patrik Elias and crew. And Zajac-Jagr-Zubrus had been on fire. But tonight Q opted to send Toews out against them. Did you hear Jagr’s name once? LEARN. Oddly, Kruger also had Keith and Seabrook backing his line against the Elias line. Still nothing.

-Duncan Keith had seven shots. Not sure I remember any of them.

-Toews went 17-5 on draws. Guess the finger is better?

-It took me forever to figure out what happened on Ryder’s goal, but I finally got that it was Seabrook’s weak clearance that handed it to him. Little harsh on Seabs as he was dealing with a rolling puck, but he probably should still do better.

-Normally I’m not a fan of forwards flying the zone, and mentioned it on Twitter after Sharp’s goal. But after seeing the replay we’ll call this one excellent anticipation in seeing Seabrook would easily deal with a weak shot and getting ahead of Hossa to find. We’re nice that way.

-Thanks to the Flames doing a favor, that’s a point gained on the Blues, which is always handy. I’m going to go celebrate my second consecutive fantasy football championship now. You’re such a toad, Vernon Davis!