High On The Hog: The Other Side 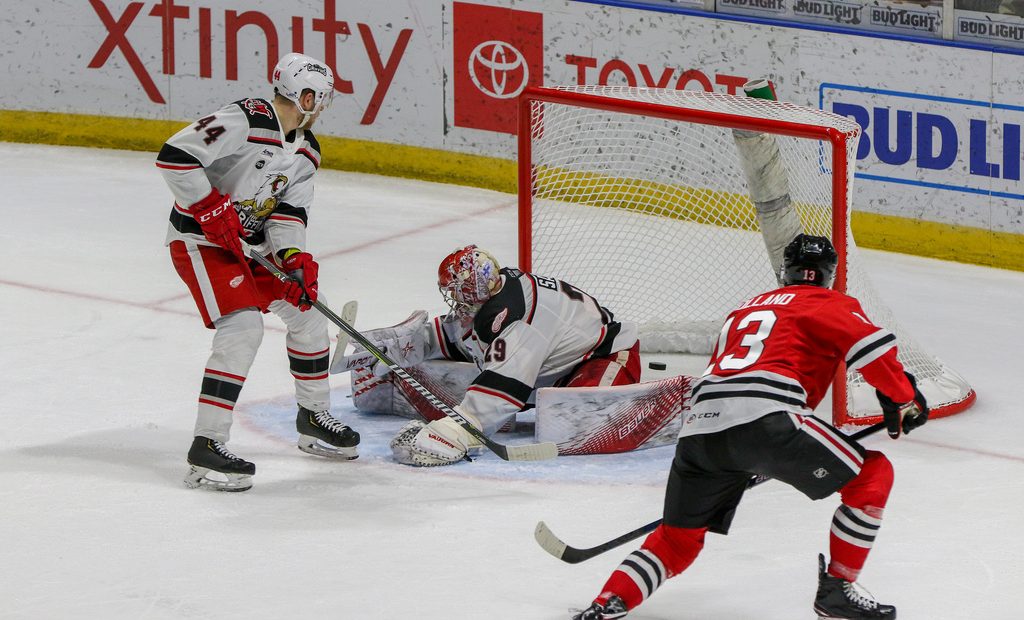 The Rockford IceHogs have been in the position of having played more games than most of their Central Division rivals for most of the last couple of months. Soon, the IceHogs are going to get a taste of having games in hand when looking at the division standings.

As of today, Rockford has played 59 games. Heading into this past weekend, this was the most games played in the division. Because the IceHogs had just one game this weekend, an exciting win over Grand Rapids, couple with Rockford being off until this Saturday, the rest of the division will catch up to, and even surpass the Hogs.

Rockford and Texas each have 63 points and are nip and tuck for the fourth and final postseason berth in the Central. The Stars currently have the spot via points percentage, having a game in hand on the IceHogs.

At that point, only the Moose will have played fewer games than Rockford. Having the benefit of games in hand brings a bit more clarity to what the Hogs have to do to earn a trip to the Calder Cup Playoffs. Breaking a three-game losing streak was a good start. Getting some players back should be even better news.

AHL signees Terry Broadhurst and William Pelletier both returned to action against the Griffins Friday night. Broadhust may have reinjured himself in the overtime win, but some other players may be nearing a return.

Hogs coach Derek King mentioned to Rockford broadcaster Joseph Zakrzewski that Tyler Sikura, who has missed most of the last two months with a broken thumb, will be going on the road trip to Manitoba this weekend. He also announced that Matthew Highmore could be back in the lineup by the end of the month.

Could getting last season’s top two goal scorers back have an impact? Maybe just a bit.

In what was a wild affair at the BMO Harris Bank Center, the Hogs earned two points from the Griffins to snap a three-game skid.

Rockford came flying out of the gate, out-shooting Grand Rapids 15-7 and taking a 3-0 lead. Jordan Schroeder got the scoring started midway through the period, taking a pass from Henri Jokiharju at the top of the right circle and flinging the puck off the far post and in past Griffins starter Harri Sateri at 9:07 of the first period.

At the 13:30 mark, Spencer Watson go his first goal since joining the IceHogs, redirecting Lucas Carlsson’s blast. In the waning seconds of first-period action, Dennis Gilbert sprawled out on the ice to knock in a rebound of Luke Johnson’s attempt.

After one of Rockford’s most inspired efforts, the Griffins pushed back hard in the middle frame. Turner Elson and Wade Megan each got rubber past Hogs goalie Collin Delia to close to within a goal of the lead. Early in the third period, Matt Puempel tied the game with a power play goal. All of a sudden, it appeared that this game could slip away from Rockford.

The IceHogs rallied to take a 4-3 lead at 13:40 of the third period. Anthony Louis led an odd-man rush with Schroeder on his left. Schroeder one-timed the subsequent Louis pass into the cage.

Grand Rapids was not finished, however. Puempel second of the night with just over two minutes remaining knotted the contest again, and the teams entered Gus Macker Time even at four. The IceHogs nearly scored several times in the extra session, finally ending the game with a Peter Holland lamp-lighter from the slot.

Two With The Moose

Both Rockford and Manitoba will be well-rested coming into the back-to-back in Winnipeg. The Moose split a pair in Belleville this past weekend. Manitoba was shut out in its loss to the Senators Saturday night.

Manitoba, like the Hogs, don’t score with the regularity of some of the top teams in the division. At 2.52 goals per game, they sit just above Rockford at the bottom of the AHL in offense.

Both of the team’s meetings this season were decided in shootouts. The Moose won 2-1 in Rockford back on October 28. On January 25, the piglets triumphed 4-3 to start a six-game winning streak.

Logan Shaw leads the Moose with 21 goals since coming from San Diego early this season. Seth Griffin (12 G, 31 A) paces the club with 43 points.

Goalie Eric Comrie, who was just reassigned by the Jets, could be in net for at least one of the games this weekend. He has a 2.73 GAA and a .917 save percentage in 40 games with Manitoba this season. Rookie Mikhail Berdin does boast that win against the Hogs this season and probably gets a start as well.

Follow me @JonFromi on twitter for updates on the Manitoba games this weekend, as well as thoughts on the IceHogs throughout the season.