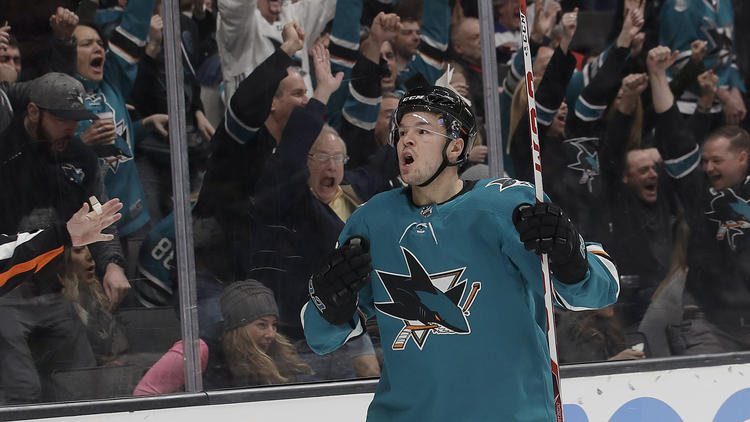 The one bonus of covering a bad team is that you rarely run out of material. But we’ve come to a point where I’ve run out of things to say. I’ll you need to know about this Hawks team is that they really did try tonight. They fought back twice against a Cup contender. And the Sharks barely got out of second gear, never looked truly troubled, and seemed always assured they would run out easy victors, And they did. They turned it on for like eight minutes, got the two goals they needed, and that was that.

So now that the Hawks have in fact sought and found their own water level, the question is what to do with the rest of the year. The truly progressive team, the one that sees things as they are (and no NHL team has ever done this before so they won’t either) would basically start scratching Toews, Keith, Seabrook and even DeBrincat and Strome semi-regularly for the last 16 games. You’ll never be able to scratch Kane when he’s competing for a Hart Trophy, unless you want a full-out mutiny on your hands.

But right now you’re on pace to draft 7th, which doesn’t do you a whole lot of good for next year at least. You already know you have something with Strome and Top Cat, and there’s no one else to develop. So why bother?

But they won’t do that, so let’s get through the rest of it…

-I guess maybe it says something that after all his vets went to the zoo on him yesterday in LA, Coach Cool Youth Pastor saw them actually try tonight. Then again, knowing they were playing the Sharks, they probably were just afraid of getting totally embarrassed again like San Jose did here at the United Center. There are far more questions about the coach than answers.

-Brandon Saad was replaced on Daydream Nation’s wing by Chris Kunitz, and he played the game like he was sulking over it. And honestly, I don’t blame him. He didn’t do anything wrong yesterday, and watched his spot given to a corpse. And then Kunitz contributed to the back-breaking goal by forcing a pass on an odd-man break that was somehow both behind Toews and between his legs. They told you they thought this was a playoff team.

-Brendan Perlini was tried with The Otter Boys, and they actually had one of their rare plus-possession games. I guess this is worth more of a look, but Perlini is starting to give off serious Jack Skille waves in that he’s fast and can shoot and can do literally nothing else.

-After he couldn’t locate a fuck to give with FBI support yesterday and then airing out his coach in the press, Duncan Keith got completely turned into cat vomit for the Sharks’ first goal. It’s not the best look. He also had a 34% Corsi tonight.

Keith’s number will get retired. And I’ll cut him as much slack as possible, But you can’t stand in defiance of your team and coach publicly when you’re playing as badly as this. He needs to pick a lane, which is something he hasn’t been able to do all season.

-A questions we’ll need to ask the rest of the season is who exactly Colliton has made better. The first answer will be Strome, but you could easily point to playing with greater talent for the main reason for his signs of life. The defense is worse, and whatever forward doesn’t get to share time with Kane either at evens or on the power play has at best stalled out.

-Oh, and the Hawks took a reaching, neutral zone penalty on Michael Haley, because that’s someone you really have to stop steaming into your zone. That’s recognition at its highest.

-Brent Seabrook and Gustav Forsling ended up with 60%+ possession marks. But Seabs topped that off with a no-look, behind the back pass to no one leading to the empty-netter. Bottomless Pistol Pete out here, motherfuckers.

-Back when I used to do these after too much imbibing I didn’t have to switch glasses. This is growing up.

Fuck the rest of it. Onwards…