High On The Hog: Sizing Up The Ads 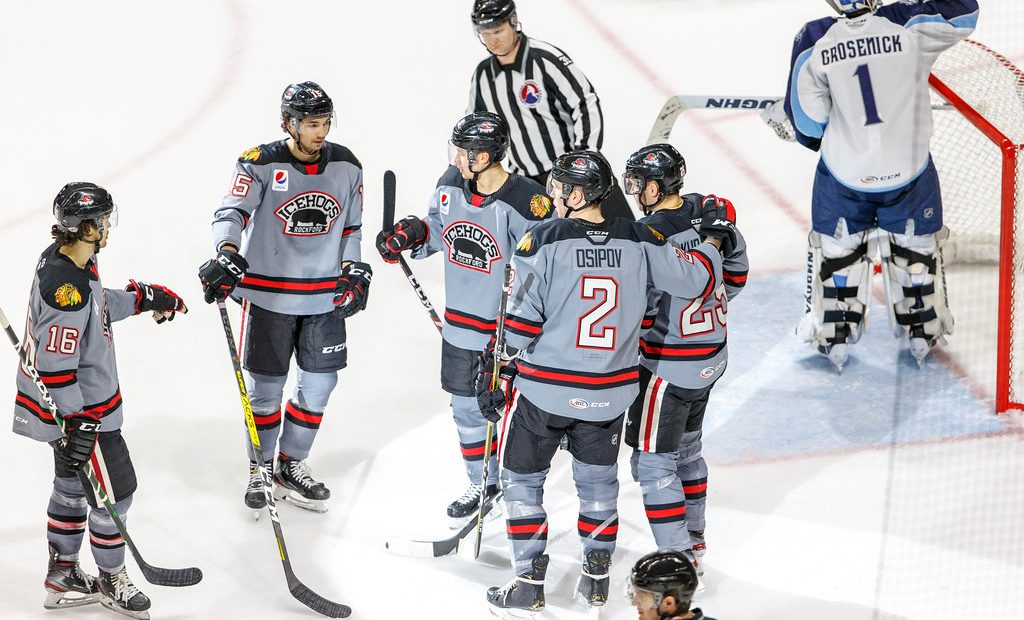 The Rockford IceHogs continued their run of solid play this weekend, earning a split of a pair of games with division rivals. The Hogs outlasted Grand Rapids Friday before coming back to Rockford for a big test against the Milwaukee Admirals.

Rockford was the latest victim of the hottest team in the AHL, winding up on the short end of a 5-2 decision Saturday night. The piglets will be getting another shot at the Admirals Tuesday night.

Can any adjustments be made by Rockford coach Derek King that can help his team’s chances?

“We should take some notes from them,” King told the media after the game. “That’s where we should be.”

The Admirals have won 15 of their last 16 games heading into Tuesday’s game, including a 7-1 thrashing of second-place Iowa on Friday. Milwaukee kept the pressure on the Hogs all evening, generating a slew of high-percentage looks at the net. Unlike Rockford, the Admirals followed up on many of the shots fired at Kevin Lankinen Saturday.

“They’re all on the same page,” King said when asked about Milwaukee’s winning formula this season. “The guy with the puck is skating it and his line mates know what’s going on. It’s either going in, or he’s going to make a play. At times we do that, and then there’s times where the maturity of our guys are just not quite there yet.”

What makes the Ads win more impressive is the face that two of their top scorers, Yakov Trenin (14 G, 12 A) and Daniel Carr (11 G, 10 A) were up with Nashville and out of Milwaukee’s lineup Saturday. It’s not a surprise to see why the Admirals lead the AHL with 41 points. Milwaukee is 13 points up on the Wild in the Central Division standings.

The IceHogs get to face off with Milwaukee eleven more times this season. It should be interesting to see how the youngsters respond to the challenge.

There was a lot of action on Saturday. The IceHogs recalled forwards Matthew Thompson and Dylan McLaughlin and defenseman Dmitri Osipov from the ECHL’s Indy Fuel. After Rockford’s game Saturday night, the Hawks recalled Dylan Sikura and re-assigned Anton Wedin to the IceHogs.

The piglets went into Van Andel Arena and outlasted the Griffins to pick up their fourth straight win. At the heart of the victory was a standout performance in net by Collin Delia, who followed up his win Tuesday night with another great effort.

Delia saved 28 of 29 shots in regulation and stopped both penalty shots after the game could not be decided in Gus Macker Time. Coach Derek King elected to hand Delia the keys to the cage for a second straight game. Delia did not disappoint.

The scoring in regulation was limited to the second period. Recent acquisition Eric Tangradi gave the Griffins a 1-0 lead with an unassisted goal at the 4:24 mark. While his centering pass was broken up by Reese Johnson, the veteran forward calmly retrieved the loose puck behind the Hogs net, powered to the front of the crease and beat Delia with the backhand.

Rockford would answer late in the period. Ian McCoshen found Tyler Sikura at the right dot. Sikura sent a touch pass to brother Dylan a few feet to his right; the subsequent one-timer was over the glove of Griffins goalie Calvin Pickard. The Hogs drew even at one goal 17:07 into the second.

It would remained tied, thanks to Delia and Pickard, through regulation and overtime. Pickard stopped Dylan Sikura in the opening round of the shootout, but Tim Soderlund and Joseph Cramarossa found the back of the net to earn Rockford the win.

The IceHogs win streak ended at four games as they were spanked at the BMO by the Western Conference’s best team.

The Admirals consistently peppered Rockford goalie Kevin Lankinen with pucks and swarmed the net to create lots of second and third chances. It was such a play that opened the scoring 4:06 into the game.

Jeremy Davies came around Lankinen’s net and was stopped by the goalie’s left pad. Former Laurent Dauphin was there to throw the rebound on net, only to be denied again by Lankinen. Lukas Craggs made good on his attempt from the goal line when the Hogs failed to clear the puck and Milwaukee led 1-0.

Rockford fans were in possession of 4,300 stuffed animals and were itching to let them fly to the ice. Two minutes later, they would receive their chance.

Jarred Tinordi’s pass attempt was swiped by Matthew Highmore, who hit Brandon Hagel coming out of the defensive zone. Hagel’s wheels did the rest, easily flying by Alexandre Carrier on his way to the front of the Admirals net. His shot beat the glove of Troy Groesenick at 5:59 of the first period to cue the bears and tie the contest.

That was to be the high-water mark for Rockford on this evening, however. Steven Santini was left open at the right circle late in the opening frame. His shot zipped over the shoulder of Lankinen for a 2-1 Milwaukee lead that they held at the break.

Tommy Novak and Mathieu Olivier would score in similar fashion in the second period to build a 4-1 Admirals lead. The Hogs found themselves just missing on several one-and-done chances, while Milwaukee was generating great looks at Lankinen, who saved 29 of 34 shots, most of which came within a few feet of the goal mouth.

The Admirals went up three goals early in the third when Anthony Richard converted on Dauphin’s pass on the odd-man rush. The IceHogs would get a goal from Phillipp Kurashev with 3:53 remaining, but by then the outcome had been decided.