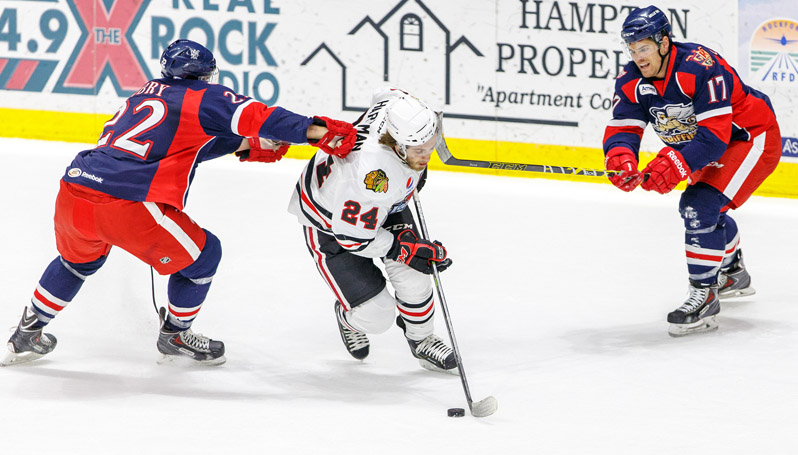 Since Abbott was obtained in a trade for defenseman T.J. Brennan, the 26-year old right wing has been on fire. Peter Regin and Abbott have just plain clicked together. Since Abbott broke into the lineup March 6, here’s how the Abbott, Regin and Brandon Mashinter line has performed:

That’s 14 goals in 13 games. Abbott’s arrival woke Regin from whatever mid-season doldrums he was in. It’s also given the IceHogs a strong veteran scoring line to go with the Super Soph Line of Garret Ross, Phillip Danault and Mark McNeill.

Chris Block tweeted on Saturday that he believes Hartman to be Rockford’s most improved player over the course of this season. It’s hard not to agree based on the way Hartman has performed since the calendar turned. Here are the numbers from Hartman’s first 35 and last 27 games in Rockford:

Hartman has been pinning his ears back and going full tilt at the net of late. He got off 13 shots in Rockford’s two games over the weekend and is beginning to bring his best game on a more consistent basis.

Since returning to the lineup after missing the last four months with a broken arm, Broadhurst has rediscovered the game that made him a 30-point performer in his rookie season last year. In seven games since coming back, he has four goals and five helpers.

Broadhurst finding his stride is one of several factors in Rockford finishing the season strong. The IceHogs are getting scoring up and down the lineup and have themselves in a position to make some postseason noise.

Rockford has signed a couple of new Blackhawks signees to amateur tryout deals. Vince Hinostroza made his debut with the Hogs Friday night (on his 21st birthday to boot) and had an assist in Saturday’s win over Rochester. In limited minutes this weekend, he showed some skill with the puck. On the other hand, the former Notre Dame skater makes Patrick Kane look like John Scott.

Tanner Kero, who just completed his senior season at Michigan Tech, signed an ATO deal with the IceHogs and has joined the team. The 5’11”, 181-pound center signed a two-year entry deal with Chicago last week.

Pierre-Cedric Labrie has missed the last few games with a lower body injury. Informal chatter around the BMO is that Labrie was in a walking boot this weekend but could be nearing a return sometime this week.

As of Monday, there was no recall of a defenseman to Rockford despite the announcement that Trevor vanRiemsdyk was undergoing wrist surgery and is done for the season.

Keith Seabrook (whose older brother Brent slummed at the BMO Saturday night) has been steady for the IceHogs since coming aboard last month. Viktor Svedberg is being used with Stephen Johns now that he appears healthy. Seabrook skated with Kyle Cumiskey and Zach Miskovic over the weekend.

This isn’t anywhere near as deep a group of defensemen as Rockford had stabled earlier in the season. However, Johns seems to be handling the extra responsibilities. He is plus-26 for the season and is tied for the league lead in that department.

Ville Pokka hasn’t looked as shiny as he did when he was skating alongside Brennan for the better part of this season, but he has a goal and five helpers since his partner was traded. He also is running the point on the second power play unit.

Coach Ted Dent has elected to skate four forwards on the power play since Brennan’s departure. Johns is the blueliner on the first unit.

The Week That Was

The IceHogs suffered their most lopsided defeat of the season in a key division contest. Despite some strong play in the opening period, Rockford trailed 2-0. Things only got worse as the Griffins wove around the Hogs defense with regularity.

Rockford outshout the Griffins 21-9 in the opening twenty but starting goalie Michael Leighton was victimized by some impressive passes to pave the way for a pair of scores by Louis-Mark Aubry and Andy Miele.

Early in the second, Peter Regin knocked a Grand Rapids pass attempt past Leighton and in came Antti Raanta to try and spark the club. Rockford got on the board when Matt Carey put in a rebound of a Ryan Hartman shot at the midway point of the game. However, Landon Ferraro came down the ice following the resulting faceoff and restored the three-goal advantage.

Tomas Nosek beat Kyle Cumiskey in the slot 15:25 into the second and dented the twine for a 5-1 Griffins lead. Grand Rapids added a power play goal in the third period to complete the spanking.

After winding up on the wrong side of a laugher Wednesday, the IceHogs responded with a dominating win over Grand Rapids at the BMO Harris Bank Center.

Mark McNeill opened the scoring for Rockford in the sixth minute by skating into the slot and driving home a rebound of a Garret Ross attempt past Griffins goalie Tom McCullom. At the 12:44 mark, Spencer Abbott took a pass from Brandon Mashinter and found Peter Regin in the slot. Regin cued the horn with a wrister that made it 2-0 Hogs.

Grand Rapids captain Jeff Hoggan cut the lead in half late in the first period but the IceHogs responded on the first shift of the middle stanza. Garret Ross came up with a steal in the Griffins zone but missed with the shot attempt. Phillip Danault collected the loose puck and fed to Kyle Cumiskey in the slot. Ross skated to the right post and knocked in Cumiskey’s pass for a 3-1 Rockford lead 31 seconds into the period.

A Nathan Paetsch goal with 2:49 remaining in the second drew Grand Rapids to within a goal after 40 minutes but the IceHogs slammed the door shut on this game with three goals in the third period. The two key tallies came at the midway point.

Dennis Rasmussen brought the puck into the offensive zone then caught up to his own dump-in behind the Grand Rapids net. Alex Broadhust took the resulting pass and fired from the right post. McCullom kept the shot out but Ryan Hartman was in front of the net and scooped the puck in with his backhand to put Rockford up 4-2 at the 9:43 mark.

Following the resulting faceoff, Mark McNeill stripped Andy Miele of the puck in front of the net and passed to Ross for a laser. The shot beat McCullom and sparked the lamp at 10:13 to make it 5-2. Hartman punctuated the big victory at 15:29 with an empty net goal. Ross, McNeill and Stephen Johns were named the game’s three stars.

The IceHogs, after treating everyone to frozen custard the night before, served up free butterbugers and locked up a spot in the playoffs by crushing the visiting Americans (that sounds so wrong but the free food makes it oh so right).

Despite keeping the action tilted toward Rochester goalie Anthony Peters, the Hogs trailed 1-0. A spectacular Dennis Rasmussen redirect was disallowed by reason of a high stick and it looked like a Dan Catenacci goal halfway through the first period was going to hold up going into the intermission.

Rockford turned things around in the period’s final two minutes. The Hogs tied the game while on the power play when Ryan Hartman set up Alex Broadhurst with a pass from the left post to the right one. Broadhurst one-timed the feed past Peters to tie the game 18:18 into the first.

Seconds later, Mark McNeill put back a rebound of a long shot by Phillip Danault to vault the IceHogs into the lead. The goal came at 18:40 and let Rockford skate into the locker room up 2-1.

The IceHogs lead increased to 3-1 on a Hartman power play goal set up by Spencer Abbott at 6:51. The Americans made it 3-2 on an Evan Rankin goal but that was as close as this one would get.

Peter Regin took advantage of Canenacci dropping his stick, taking the pass from Abbott and sending an uncontested shot over the glove of Peters for Rockford’s third power play goal of the night 14:17 into the second period. New Rockford forward Vince Hinostroza, playing in his second game with the Hogs, got his first professional point by getting the puck to Broadhurst near the right post. The shot was stopped by Peters but Rasmussen dove into the crease to poke the rebound over the goal line to make it 5-2 IceHogs with 2:08 remaining in the second.

Going into the final 20 minutes, the only question on the 5565 BMO faithful was whether the Hogs could upgrade the free frozen custard promised by Culvers. Before that could happen, things got a little fighty out there.

Cody Bass, who had already lost his gloves earlier in the game, went again after some initial shoving with Colin Jacobs. The fight quickly went to the ice as both players went down but Jacobs took advantage of the officials stepping in to throw a few punches at the restrained Bass.

At that point, Hartman jumped into the fray and got a bit of a line brawl going. Matt McKenzie tied up with Hartman while Zach Miskovic danced with Michael Pelech all over the ice for well over a minute while the linesmen attempted to quell the other bouts. All six players involved in the fracas were given fighting majors and game misconducts, with Hartman earning an additional ten minute game misconduct for jumping into the Bass-Jacobs affair.

When the smoke cleared, the IceHogs got back to wearing out the twine behind Peters. Broadhurst netted his second of the evening at the 5:05 mark thanks to a short pass by Danault to up the ante to a concrete mixer. The Butterburger goal was potted with 2:47 to play when Garret Ross knocked in a rebound of Broadhurst’s shot.

With a pair of goals and 5 points on the night, Broadhust was named the game’s first star. Hartman and Abbott were second and third stars, respectively.

Rockford hosts a free-falling Milwaukee team that is fighting for a playoff spot on Tuesday. The IceHogs then travel to Iowa Thursday to start the final road trip of the season. It’s a three game swing that will continue in Charlotte for two games on Friday and Saturday nights.

The Admirals have just two wins in their last ten. Iowa is in the storm cellar of the conference basement and the Checkers are also well under the .500 mark. Rockford has been a stellar road club this season (20-13-1-1) and still has a chance to move up in the division and conference standings.

I may send out twitter updates for some or all of these road games. Follow me @JonFromi and I’ll let you know which games I wind up watching this week.