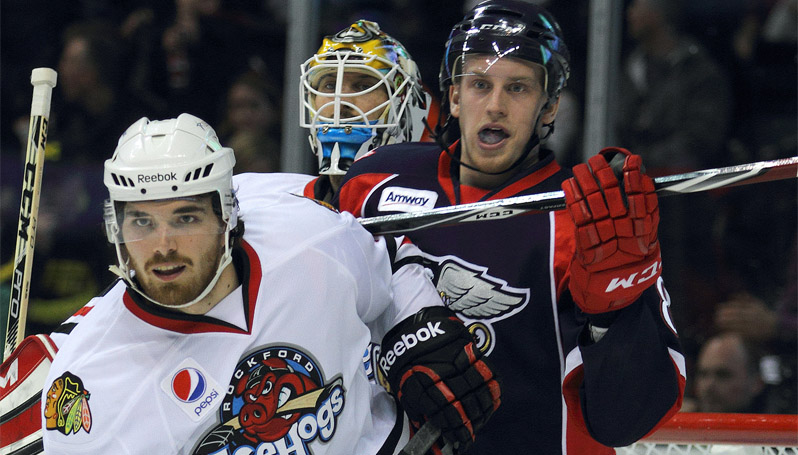 The Rockford IceHogs face a familiar opponent in the second round of the Calder Cup Playoffs. After completing a sweep of Texas at the BMO this past Wednesday, the IceHogs will be facing off in Grand Rapids this Wednesday and Friday in the first two games of the Western Conference Semifinal.

The Griffins battled back from an 0-2 deficit against Toronto, winning three straight home games to advance to the second round. The best-of-seven series will feature a 2-3-2 format, meaning that Rockford plays host in Games 3, 4 and 5 should it go that far.

The way things have gone between the two teams this season, it should go at least that far. This really shapes up to be a high-octane series.

The IceHogs won four of the seven meetings between the two teams in the regular season. It’s worth noting that two of those wins came early in the season when the Griffins were really scuffling. Grand Rapids finished the season on a 23-7-1-1 tear, winning the Midwest Division title in the process.

The last two contests between the Hogs and Griffins were lopsided to say the least. Rockford played April Fools as Grand Rapids chased starting goalie Michael Leighton on the way to a 6-1 victory. Two days later in the Forest City, the IceHogs walloped Grand Rapids by a score of 6-2.

It will almost certainly be Leighton and Tom McCollum in the creases for their respective teams. The two squared off four times in the regular season with each winning two games.

Grand Rapids has some players who can fill a net, led by Finnish sensation Teemu Pulkkinen. Despite playing just 46 AHL games due to the time he spent in Detroit, Pulkkinen led the league with 34 goals. The 23-year-old wing has some serious puck skills and netted six goals against the Marlies in the first round.

Center Andy Miele was second in the AHL in scoring with 70 points and is another key player for the Hogs to hold in check. Like Rockford, the Griffins have loads of scoring depth, including right wing Landon Ferraro (27 goals). Speedy center Andreas Athanasiou lit the lamp four times in the first round and the Grand Rapids power play was six-for-twenty against Toronto.

If Rockford has proved anything throughout the last few months, its that they can skate with any team in the league, the red-hot Griffins included. Expect a back and forth series that could certainly go either way.

If you want some updates and some thoughts on Game 1, follow me @JonFromi on twitter as I hope to be watching Wednesday night.

The defending AHL champion Stars had their season ended by the IceHogs, who got a great individual effort from Stephen Johns in the first shift of the extra session. Johns coast-to-coast wraparound effort capped a Rockford comeback that started when the Hogs scored midway through the third period.

There were 3905 fans who braved the partly cloudy skies to attend the contest, Rockford’s first playoff game in over five years. Those fans had something to holler about early on.

Rockford opened the scoring 3:43 into the first period. Phillip Danault put in the work, digging pucks out of the corner to help sustain possession in the Stars zone.  The second time, he made a falling pass out to Viktor Svedberg out at the point.

Svedberg collected the pass and got the disk down to Mark McNeill below the goal line. Danault got back on his skates and made his way to the right post to be available for McNeill’s centering pass. Texas captain Maxime Fortunus got a blade on the pass, which led to an airborne puck caroming off of Danault’s chest and past Jussi Rynnas.

The IceHogs completely outplayed Texas for the bulk of the opening twenty but a late Stars goal evened the score at a goal apiece. Devin Shore picked the pocket of Tanner Kero just outside the Texas blue line and came up the right side. Stopping to set up at the top of the right circle, Shore took advantage of a Greg Rallo screen and snapped a shot past Michael Leighton on the far side with 39 seconds before the first intermission.

The Stars took control of the contest in the sandwich stanza, outshooting Rockford 17-13 and taking the lead with another late goal.

This one came with 1:19 left in the second period and Danault had whiffed on a dump-in attempt. Brett Ritchie brought the puck into the zone and over to the left half boards. He then fired a shot that glanced off the stick of  Stars forward Scott Glennie, who was tied up with Ville Pokka. Glennie made an impressive spin move to reach over and hack the loose puck into the cage. The Hogs went into the locker room down 2-1.

Midway through the third, Danault tied the game for the IceHogs with a superhuman effort after being robbed by a terrific glove save by Rynnas seconds earlier. Taking the resulting faceoff to the net, Danault got off a falling attempt that was denied by the Stars net-minder. From a prone position, Daunault swung at the rebound and managed to knock it up and over Rynnas’ shoulder. At the 9:51 mark, the IceHogs had knotted the score 2-2.

Johns took it from there in the overtime. Stepping in front of a Brendan Ranford pass meant for Travis Morin, Johns wove along the right boards into the Stars zone. The rookie defenseman looped around the net and snuck the biscuit over the right pad of Rynnas to bring the evening, and the series, to an end.

Leighton, who stopped 39 of 41 shots, was voted third star of the game. Danault’s efforts garnered second star honors and Johns was tabbed first star for the game-winner.