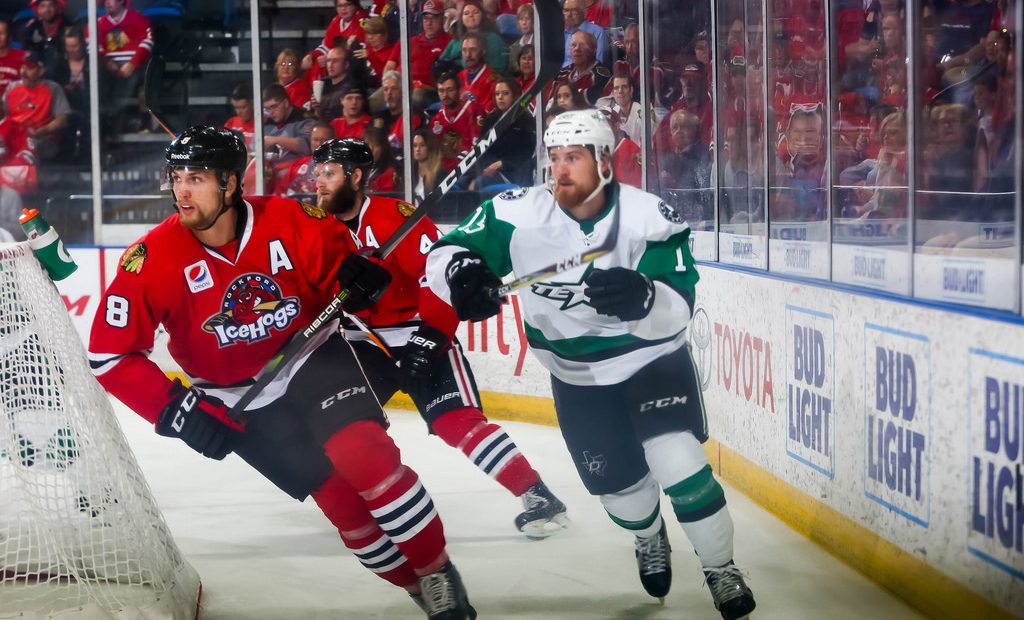 The Rockford IceHogs are still alive in their Western Conference Final with Texas. Barely.

The Stars found a way to win yet again over a Rockford team that dominated large stretches of the contest. The IceHogs rallied with a late goal to send Game 3 to overtime Tuesday night. However, Rockford fell victim to another Curtis McKenzie game-winner five minutes into the extra session, losing 6-5.

The piglets find themselves down 3-0 in the series and have a day to regroup before Game 4 at the BMO Harris Bank Center on Thursday. Is it time to pack it in? Rockford has shown its characteristic stick-to-it-ive-ness throughout the series. Trouble is, the Stars have possessed just a bit more of whatever you want to call postseason resiliency.

IceHogs coach Jeremy Colliton elected to make a couple of changes in what has been a very consistent lineup Tuesday. Henrik Samuelsson took the place of Anthony Louis on a forward line. Joni Tuulola drew in for Darren Raddysh on defense.

Bringing in a big body like Samuelsson didn’t hurt the Hogs, though it didn’t show up on the scoreboard. Tuulola seemed an odd choice, seeing as how he had two regular season games under his belt coming into Game 3. I would have figured Robin Norell, who was lauded for his defensive skills by the team whether he was on defense or skating on a forward line, would have been a candidate to get a start. However, Colliton likely wanted the big body Tuulola brought to the table.

If you told me before the game that Rockford would put up five goals, I would have felt pretty good about the IceHogs chances. Things didn’t work out to plan, though.

Tyler Sikura got the scoring started 4:43 into period one with an incredible individual effort. After receiving a pass from Chris DiDomenico in neutral ice, Sikura skated into the Texas zone. He fought through Matt Mangene and Dillon Heatherington before firing past a stunned Mike McKenna to give Rockford a 1-0 lead.

Texas got back to even ground by converting a 5-on-3 advantage, with McKenzie knocking in a rebound of Justin Dowling’s shot at the 7:13 mark. It would prove to be the only power play goal of the game, though the Hogs would score for the first of two times when up a man in Game 3.

The first came on a delayed penalty, with John Hayden lining up a shot from the slot that McKenna couldn’t handle. Carl Dahlstrom and Gustav Forsling assisted as the Hogs took a 2-1 advantage at 12:10 of the first period.

The Stars came back with two quick goals by Dowling and Sheldon Dries and led 3-2 at the intermission. Rockford was in need of a response and did so, dominating the second period.

Forsling sent a laser into the ropes just after a power play expired 6:17 into the second to tie the game at three. At the 12:21 mark, the Hogs had just completed killing a interference call on DiDomenico. Rockford’s playoff spark plug scooped up a loose puck in the corner of the Texas zone and skated behind the net to the right circle. DiDomenico found Matthew Highmore open at the left dot. Luke Johnson was knocking at McKenna’s back door and got a stick on the centering pass to put the IceHogs up 4-3.

The IceHogs were in need of some insurance to begin the third period. For the first ten minutes of action, it appeared that they were going to get it. Rockford camped out in the offensive zone and slammed away at McKenna. Despite a host of opportunities, the Hogs failed to build on their lead. It proved costly.

Dries would get his second goal of the night midway through the period. The rookie forward found a huge pocket at the left dot. Taking a feed from Reece Scarlett, Dries had the time and space to outmaneuver Hogs goalie Collin Delia at the left post to tie the game at the 10:54 mark.

With 5:30 left in the contest, McKenzie was walled up along the right half boards by Tuulola and Hayden. His pass attempt was blocked by Hayden’s stick and up in the air. Austin Fyten, playing in his first game in the AHL, grabbed the puck, settled it and powered it past Delia to give Texas a 5-4 lead.

Credit the resolve of the IceHogs, who pulled Delia from the crease with just under three minutes to go and tied the game with 50 seconds to play. DiDomenico and Johnson were able to cycle the puck out of the corner, sending it out to the point.

The pass was off the ice, but Cody Franson was able to catch the puck, set it down and send a low shot toward net. McKenna had a lot of traffic in front of him, allowing the shot to slide into the net and give Rockford new life.

The IceHogs would see their overtime fortunes turn sour for the second straight game via the stick of the Stars captain. McKenzie won control of a loose puck inside the blue line and skated to the top of the right circle. His centering pass to Dries caught the stick of a back checking Adam Clendening and over Delia’s blocker to close out Game 3.

A bit of controversy surrounded the game-winner. Hogs players argued that Texas had too many men on the ice for the goal. Lance Bouma looked like he thought he had cleared the zone and that McKenzie was offside. Regardless, the fate of Rockford was sealed. Colliton and Company are now in must-win mode…big time.

The audience at the BMO was once again impressive for a weeknight game. Nearly 3,000 showed up to wave red rally towels and boo the officials off of the ice following the finish of Game 3. A lot of those fans probably went home thinking that bad calls cost Rockford the game. I’m not sure I agree.

Texas has been a very difficult team to put away in the playoffs. The IceHogs had ample opportunity to do so in the third period and have had their chances in the other games as well. The Stars, as they have done all series, found a way to win, be it catching a airborne puck, cashing in on a fortunate rebound, or converting an odd-man rush off a defender’s blade.

Rockford was the better team for huge stretches of Game 3. But for a bounce here or there, they could be up 2-1 in the Western Conference Final. They are not, though. To win Game 4 on Thursday and prolong the series, the Hogs need to find a way to finish off the Stars.