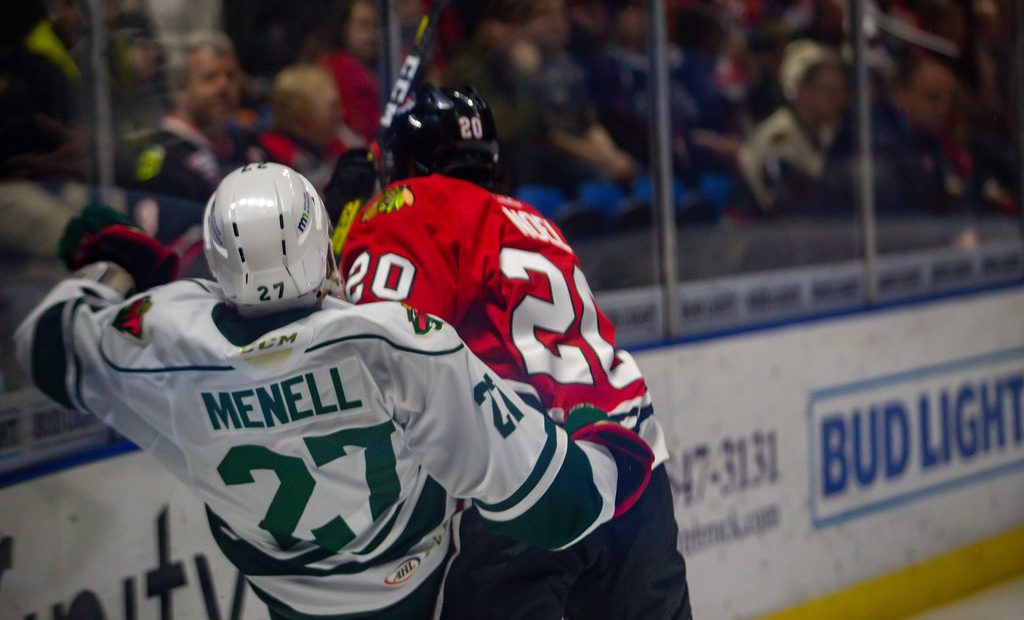 The Rockford IceHogs took some lumps over the weekend. The piglets are currently mired in a three-game losing streak after a 6-2 loss at the BMO to Iowa Friday night and a 3-2 loss in Manitoba Sunday afternoon.

The group that finished the matinee with the Moose was a wee bit thin up front. To put a finer point on it, the Hogs were skating with ten forwards for the bulk of that game.

Why so shorthanded? Here’s a quick look at how things shook out over the weekend.

The IceHogs entered Friday with 13 forwards. In the third period of what was a very chippy game with the Wild, Nathan Noel was called for a slew foot of Iowa’s Brennen Menell. Noel was given a match penalty for the play and suspended for one game by the AHL.

Despite protests by the BMO faithful, this was absolutely the correct call.

From the waist up, Noel delivers a perfectly legal hit as the players are going up against the end boards. That misdirection kept a lot of folks from seeing Noel’s left leg, which swept the Wild defenseman’s skates out from under him. Hard to determine intent, but it was an obvious slew foot.

As you would expect, Hogs announcer Joey Zakrzewski was drawn in by the legal part of the hit. Iowa broadcaster Joe O’Donnell called the slew foot right away. It just depends on where you were looking on the play. However, Noel was guilty, the officials got it right, and the third-year forward was unavailable for Sunday’s game.

On Sunday, forward Anton Wedin was ill, forcing Rockford coach Derek King to send 11 forwards and seven defensemen onto the ice. In the eighth minute, Phillipp was attempting to get his stick on a loose puck in the defensive zone when Manitoba’s Ryan White skated by and caught the Hogs rookie in the face with an elbow.

Kurashev skated off under his own power but did not return to the contest. As usual, the IceHogs skated hard despite being down to ten forwards but lost the game.

A suspension will likely be announced today for White, who was tagged for a five-minute major and a game misconduct for the play. It appeared that White was trying to avoid contact with Kurashev, though that resulted in undeniable contact to the head.

Following Sunday’s game, King had this to say about Kurashev:

“I think he’s feeling all right. I’ll have to see how he is tomorrow morning, if he feels any better. I think he’s just got a little bit of a headache, or what have you. We’ll try him out, see if he wants to skate, and if he feels good, we’ll see where we go from there.”

I would assume that the organization is going to evaluate their 20-year old prospect’s “headache” before sending him back out for another tilt with the Moose on Tuesday. Rockford may try and finish the Manitoba trip with Noel and possibly Wedin returning. We could see a call up from the ECHL’s Indy Fuel, or King could go with seven defensemen again.

Hogs goalie Matt Tomkins is with Team Canada at the Spengler Cup. He got his first action on Saturday, stopping 22 of 23 shots in a 5-1 victory over the host team, HC Davos.

The IceHogs travel to DesMoines Friday for another go at the Wild, returning to the BMO Harris Bank Center on Sunday afternoon. There, they tangle with the Chicago Wolves.

I’ll be back on Friday to recap Tuesday’s game in Manitoba and also continue my look at the Hawks difficulties in developing defensive talent. Follow me @JonFromi on twitter for thoughts on the IceHogs throughout the season.