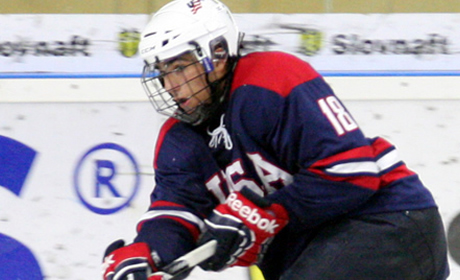 It didn’t come with the fireworks we thought tonight. We all held out breath when it was reported that Hawks’ and Sharks’ reps were at the NHL table filing a trade, but in the end it just ended up being a swap of picks so the Hawks could move up. Which leads you to believe that Nick Schmaltz was a target of theirs and they went out of their way to get him.

What Schmaltz sounds like is basically a slightly bigger, American version of Teuvo Teravainen, with perhaps more finish. But Schmaltz’s game is definitely pass-first, and everyone raves about his vision and hands. He doesn’t have the size you might like, but is very strong on his skates and squirts out of traffic well.

Schmaltz has a rep for tacking a shift off or even a game off here and there, but I’m not going to dismiss a 17-year-old because his focus might waver at times. We’ll see what he does at North Dakota. He has to work on his defensive game, but who doesn’t at that age? Once again the Hawks have drafted for serious skill, which seems to be a habit of theirs. As we said, past Teuvo and Danault the Hawks looked a little short down the middle in the system. They addressed that tonight.

Tomorrow should be more interesting, as if they’re going to dump Oduya for picks and cap space it will be then.