Sure, we’re making too much of a deal of barely a fourth-liner (or barely an NHL-er). But at least we now know that Stan sees what all of us sees, or saw. And Stan is at least making attempts to re-jigger this team how he sees fit, with more speed and skill (thus the pumping and re-signing of Morin). And the fact that some team was dumb enough to give up not just a draft pick, but a 3rd rounder which could be somewhat valuable, I nearly plotzed! Watch what a difference actually having a 4th line could make next spring.

As for the picks today, well, who knows if any of these guys will come up for air. But we’ll do what we can to see what the Hawks have picked up.

Matheson Iacopelli (RW) – Lit up the USHL this year with 45 goals. Big kid, at 6-2 though he’ll have to fill in that 172 pound frame. Off to Western Michigan in the fall where he’ll be coached by former NHL coach Andy Murray. From SBNCollegeHockey.com:

Iacopelli has very soft hands and tremendous scoring touch for a player his size. He’s got great offensive instincts, an above average shot, and isn’t afraid to use his size to gain position and win pucks in front of the net. Forty goals in the USHL is an impressive number that is rarely reached.

On the downside, Iacopelli is an average skater at best, and while he does play a physical game, isn’t as strong on the defensive end.

Intriguing prospect from a hockey family with great height and attractive potential. Has the size but will remain a longer term prospect until he gets better coordinated and more muscle on his long skinny frame. There is lots to like and wait for. He has put points on the board, and plays a tenacious forechecking role. Strong on the puck. He has decent hands and a nice hard shot. Is a very good skater and once he puts muscle on, he may be a player. He is a future shutdown centre with toughness.

Fredrik Olofsson – Hawks were apparently intent on size up front, as this is another one over six feet tall. Good enough to be on the Swedish team for the U-18 Ivan Helinka tournament. He’ll be off to Colorado College in the fall.

Luc Snuggerud – First d-man the Hawks took, and he’s from Eden Prairie, MN so I guess he’ll just flatter to deceive as other blue-liners from that area have, right? Kinda small for a d-man at only 5-11. Real offensive upside, and he won the top d-man award in Minnesota high school hockey, which isn’t nothing. He’s off to wear those awesome Nebraska-Omaha jerseys next year.

Andreas Soderberg – Opposite of Snuggerud, as this is a big d-man at 6-4 who is probably more the stay at home type. He’ll stay in Europe.

From there the Hawks actually took a Russian in goalie Ivan Nalimov and a couple longer-term projects in Dylan Sikura and right wing Jack Ramsey.

Surprising the Hawks didn’t unload Johnny Oduya for picks, as they really have to open up cap space, The Bollig trade gets them barely under the cap for this year, and we’ve seen how having no flexibility under the cap during the season can work out. Maybe they’ll do it this week for future picks when a team misses out on the free agent d-man they really want. Maybe they’ll wait until the entire market shakes out. But the Hawks still have to clear space to have wiggle room during the season for whatever might arise. Stay tuned, this week only just started as to how the Hawks will remake themselves for next season. 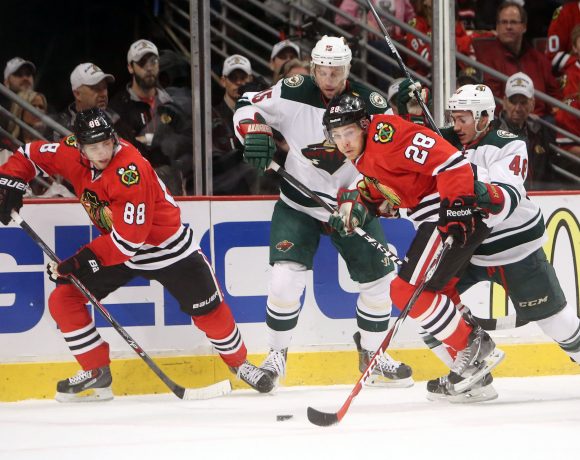