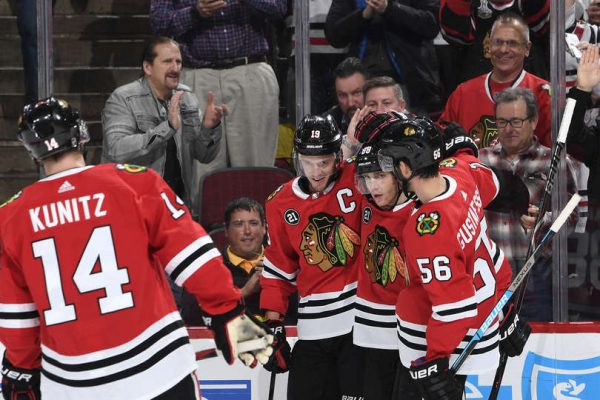 Don’t get me wrong, it’s more fun to watch the Hawks win than to watch them lose, but while these last two games may be some point of pride for the players, it’s in a way even more frustrating to see them beat better teams when it no longer matters. If they just got their ass kicked we could shrug and say yeah, this is where we’re at. Maybe it would help their draft position in some small way. But when they manage to do something like score five on a really hot goalie while only giving up one, it rubs salt in the wound remembering how they couldn’t do this in the key moments when it mattered. Fuck it all, let’s do the bullets:

– Tonight was really a showcase in not-giving-a-shit, in many different ways. But how could that be, you wonder? The Hawks scored five goals…how could they not give a shit? Well, when the first period ended neither team had shots in double-digits. Both teams were playing, shall we say, leisurely, and even the refs didn’t give a shit enough to call a penalty shot on a clear take-down of Gustafsson on a break-away. You would think the Stars would have wanted to make at least a half-assed effort, but with a couple notable exceptions like John Klingberg robbing Alex DeBrincat (legally) on yet another breakaway, they really couldn’t be bothered.

– But yes, the Hawks did score five goals, so there’s a feather in our cap. Kane has a career-high in points and now 44 goals, Kahun scored off a great play by Brandon Saad in the second when Saad made a great move at the blue line and drove to the net where Kahun picked up the rebound, hell even Slater Koekkoek got his very first goal. Dylan Sikura must be pissed. Chris Kunitz also scored in what is most likely his last game as an NHL player, or if not his absolute last, the last one in a home rink. I’ve been bored and mildly annoyed with the fuss they’ve made for him even though yes, I get it, it’s the right thing to do. But I will say it was rather touching how genuinely excited his teammates were when his weird, fluky bounce was deemed to have just barely crossed the goal line. So good for him, now Chris Kunitz please go away.

– Can we all just take a moment to reflect on the scoring capability that’s on this team and yet the fact that they’re missing the playoffs again? I know we’ve all beaten this dead horse—I know you’ve thought about it and we’ve all marveled at how shitty a defense can be, how inexplicable some personnel decisions have been…all of it. But god damn it, games like this throw into harsh relief the absurdity of such talent and career years by Kane and Toews being wasted.

– And just to make things worse, Corey Crawford sustained a groin injury and left the game in the second period. Yeah, he’s got plenty of time to recover and a muscular injury is definitely less worrisome than another head injury. But this guy doesn’t need any more shit breaking or going awry, even if he’s got six months to heal. He most likely pulled it when moving left to right on a brilliant save in the first, but you could tell he was struggling when he got back up. So that’s just one more kick in the collective ass for this season and one more roadblock for someone who doesn’t deserve the hand he’s been dealt with this team lately.

– Speaking of goalie problems, Anton Khudobin came into this game with a .926 SV% and somehow managed to barf up an .813. Part of this was undoubtedly his defense not giving a rat’s ass—case in point, the first goal when Dowling kinda sorta attempted to block a shot and the rest of the Stars literally skated the opposite way of Kane and the puck, making it easier than it already is for him. Also, there was some bad luck for the Stars like when the puck deflected off Reverend Lovejoy’s skate and right onto Dylan Strome‘s stick, who happened to be all alone in front of the crease and just held onto it long enough to get Khudobin moving the wrong way. So it wasn’t that Khudobin just fucked up royally, but he still should have had at least a couple of these.

So that’s the end of things on Madison St. this season. They didn’t go down like bitches in front of the fans for the last time, which I suppose is a nice gesture. But it grinds my gears one more time that only when there’s no pressure could they rise to the occasion and play a well-rounded game. Pullega will be here tomorrow night to bring it all home for you. Onward and upward indeed.