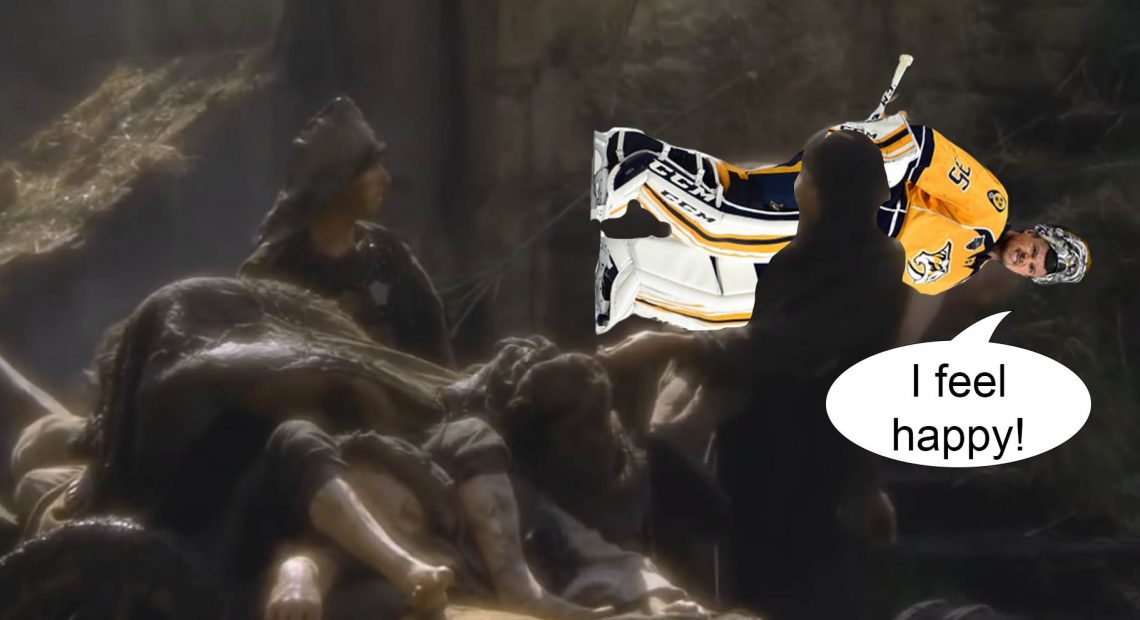 It was only two or three years ago that you’d be forgiven for thinking that Pekka Rinne was finished. It feels like eons, but in reality it was only a few grains of sand in the hourglass of life (whoa, trippy).

Just over three years ago, Rinne was borderline terrible against the Hawks in a first-round series and really was the difference between the Preds pulling their upset then instead of waiting for two years. The following season he was mediocre at best throughout the entire campaign, posting a .908, and leading to the first calls for Juuse Saros to start to take over in the Nashville net. Preds fans were actually anxious to see the crease filled by someone else for the first time in a decade. Rinne wasn’t much better in the playoffs, posting a .906 that was good enough to see off another Ducks choke in a Game 7 at home but was pretty much railroaded by the Sharks.

Even the following regular season was only league average at .918. But something clicked in the spring of 2017, as Rinne put up a .923 in March. You’ll then recall the .980 (yes, .980) he threw at the Hawks in that authoritative and comedic sweep. Rinne would go on to produce a .930 throughout the Preds playoff run, though it came apart in the Final against the Penguins.

And it hasn’t stopped.

Rinne’s renaissance (alliteration noted) in his mid-30s is nothing short of astonishing. In fact, he’s having one of the best seasons by a goaltender over 35 in history at the moment. No goalie has bested his current .929 at 35 or older except for Tim Thomas‘s .938 in 2010-2011 which saw him win a Vezina, Conn Smythe, and Stanley Cup. And as we’ve mentioned before, Thomas didn’t even crack an NHL lineup until after he was 30, so he didn’t have the miles. Roberto Luongo matched Rinne’s .929 last year at 38, and is really his only comparable. Ryan Miller was just a tick below at .928, but he was a backup. Rinne’s .927 is the third-best mark by any starter 35 or over.

Which makes Rinne’s next two years at $5M something beyond a bargain. Luongo is the cautionary tale of course, as he got hurt at 39 (this year) and has been pretty terrible since. He’s also three years older, exactly when Rinne’s contract would be up. Tim Thomas lost it at 39 as well. Martin Brodeur went off the diving board at 38, though he kept playing because no one could seem to tell him no. The Preds and Rinne might have this one clocked perfectly.

There are goalies who have won the Vezina Trophy at older than 36, a feat Rinne looks odds-on for. But the only one in the modern era is Thomas and Dominik Hasek in 2000-2001. And only Hasek for a second time, and no one for a second-straight year. Brodeur won at 34 and 35. Hasek won at 34 and 36. This is just not something we see very often.

Maybe there’s an injury right around the corner. Or a dip in form if Juuse Saros can’t spell him more consistently. Maybe it all hinges on what he does in the playoffs and if he can get the Preds where they’ve never been before. But we might not see this again, or at least for a while.