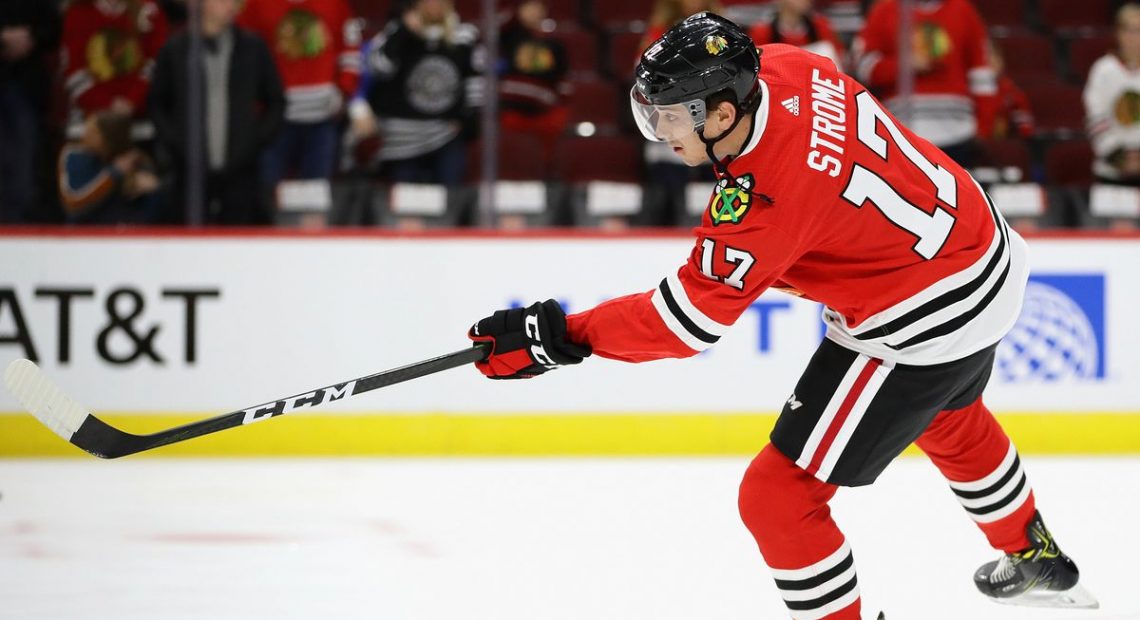 This season is barely more than 25% done and it’s already become a damn chore to watch these games. It’s hard to evaluate what’s going on in games like this outside of “holy fuck this is awful” which makes my job for this wrap all the more difficult. I will do my best to not be dramatic, but spoiler alert, it’s a lot of suck. THE BULLETS (hopefully one lodges itself in my skull):

– Let’s start with a positive: I was rather impressed with Dylan Strome in this game. His skill showed out a few times and his hockey instincts that you hear praised a lot were on full display almost all night, especially on his goal. There was one shift in the first period where he basically just posted up in the slot for about 30 seconds while Kane and Top Cat made some stuff happen on the outside, and he got a few decent looks out of it. His goal was just pure instincts in ending up in the right spot for a netfront scrum, and he made a hell of a play on the Hawks third goal in garbage time, forechecking hard and stripping the Vegas defenseman before making a beautiful pass to set up Erik Gustafsson for a goal. On top of that, with lack of skating speed being his main weakness, there was never a moment where I thought “damn, if only he was faster” tonight. That might be because of the rest of the roster, but he hung with the Hawks two fastest guys in Kane and Top Cat. For this being his first game in the Four Feather Sweater, he made a good impression.

– Now the bad. There are two main players that were absolute garbage tonight, and they are probably the two players the Hawks absolutely cannot have be garbage. Those were Jonathan Toews, and Duncan Keith. Let’s give them each their own bullet so I can really flesh out the bitching.

– Let me take you to the second Knights’ goal of the night, with just under 8 minutes to go in the period. Frustratingly, this play starts in the Hawks zone, with the puck on the Hawks fucking sticks. Toews gets a pass and kinda backs into the near (to the TV) corner, surveying the ice and kind of buying time as the Hawks finish a total change. But then he inexplicably blindly flings the puck to the point, with the only problem being that there’s no one there. It ends up going all the way down to Crawford behind the net. Toews makes absolutely zero effort to get back into the Hawks d-zone, and after Crawford makes a bad turnover (that I don’t really blame him for) Alex Tuch picks a corner with Toews still on the wrong side of the red line. Later on he was almost solely responsible for the Knights’ third goal, as he was way out of position and didn’t shut down the slot as Gustav Forsling was forced to pinch the corner (more on that in a moment). His positioning was awful and Cody Eakin, who should’ve been Toews’ man, was all alone in front of Crawford for a goal. It didn’t get better for the Captain, despite him making the score sheet with an assist.

– Now let’s talk about Duncan Keith. This is kind of well-worn at this point, and you all know that there is no lack of love for Keith and what he has meant to this franchise from anyone at this site, myself included. But he was just utter ass tonight. Let’s revisit the Knights’ third goal that we mentioned above where Toews didn’t cover his man correctly. Well, the only reason that bad positioning by Toews was so egregious was because Keith went sight-seeing behind the net even though he had tons of time to adjust after his man passed the puck into the corner while skating behind the net. If you’re behind the net skating away from the puck as a defenseman, you’re about as useful as the drunk asshole in the front row banging on the glass in the corner. Keith’s little detour resulted in Forsling being in an awkward position and having to pinch the corner, which led to Toews needing to cover the slot but not doing it, which led to a goal. If Keith goes to the corner with the puck, the Hawks have this defended well. Instead, it ends up in the back of their net. It also didn’t get better for Keith throughout the night, and the Knights eighth and final goal ended up going in off of him.

– My last two major gripes about this game are simple. Number 1 – the Blackhawks have no fucking clue what they’re doing in their defensive zone, both when they have the puck and when their don’t. Their breakout strategy is non-existant. I extolled the virtues of getting away from Q’s slow, methodical breakouts, but even that was better than watching these fuckstick defensemen play hot potato with the puck and not make any real decision to get it up the ice. Gripe Number 2 – the effort in the third period was fucking piss poor. I know it was already 6-2 and the game was pretty much over, but having an 18% CF at 5v5 in a game you are losing at home is fucking inexcusable. How can this team expect us to believe they can compete if they clearly don’t believe it, or don’t care to at least act like they do?