Eyes On The Captain And Other Thoughts On This Nervous Night 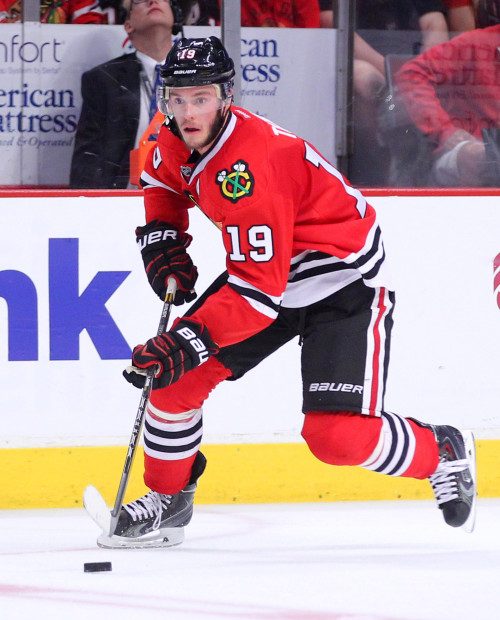 Lately I’ve been expressing concern over Jonathan Toews, and as I normally do I ripped it off one of my blogmates because they’re smarter (and handsomer!). Fifth Feather was the first to raise a question about Toews’s condition, noticing that he was misplacing passes and losing board battles more often than we are accustomed to seeing (basically, at all). I thought I’d dig a little deeper.

I guess the most concerning number bouncing out at me is that over the past four games Toews only has four shots. That’s his lowest stretch of that length all season. If it wasn’t for Michal Neuvirth pretty much gifting him two goals against the Islanders, he wouldn’t have scored for nine games. His only points in the last four were the result of a blocked shot leading to Shaw’s empty-netter against Carolina.

Possession-wise, there are some discouraging numbers. Toews has lost the possession battle in five of his last nine games, which we’re just not used to. Small sample size to be sure, but with Kane out the Hawks kind of need Toews to buckwheat opponents by himself and he hasn’t really done it. And Toews has lost out to some wonky opponents like the Canes and Oilers, and got totally housed by Logan Couture. Some of that was team-wide failures of course.

Usage is a component as well, of course. Q has gone to the old methods, which is Toews plays mine-sweeper against the other teams’ best and the other three lines are supposed to get the best of the rubble that’s left. However, the Hawks aren’t really set up to do that right now outside of Hossa and Sharp on the 2nd line, as currently constructed. You can’t count on your 4th line to score every game, as good as they’ve been. With Sharp, Bickell, Versteeg, Vermette, and Richards to a lesser extent all struggling to find the net lately, the Hawks can’t really afford to sacrifice what Toews could bring by having him combat #1 centers.

And the thing is, with Vermette and Kruger, Toews shouldn’t need to. While Vermette hasn’t done anything on the offensive end in the past four or five games, he’s still doing the work as a defensive center. Q could use those two to combat #1 lines and probably still come out with a draw, and freeing up Toews to score is something the Hawks need right now. It might be hard to do on the road, but let’s say Monday against the Kings who would you rather have him facing, Kopitar or Jarret Stoll?

Watching him, Toews just looks more labored than he has in the past. Everything is just taking more effort from him. His penalty last night was a result of not being able to keep up with Bellmare, and that shouldn’t be. It could be just fatigue, the dude has played a lot of hockey the past three seasons.

Something tells me that he’s carrying something, but due to Kane’s injury and the Hawks unstable place in the standings he’s gutting it out. He hasn’t skipped out on any practices like some of his teammates have, so I could just be talking out of my ass per usual. Just worth watching.

-Still, one would expect that eventually Toews is going to be Toews, and there are other things going on with this team that are encouraging. The highest of that being Johnny Oduya’s play. Once again last night, Oduya was way up in the Corsi-count, and that’s with starting almost every shift in the defensive zone. Oduya has been 55+% in four of his past five games, while taking 38 shifts starting in the d-zone vs. only 22 in the offensive. And he’s done this facing the other teams’ best as he and Hammer are wont to do.

This is vital. we’ve worried all season about Oduya and what he allows the Hawks to do when he’s on. While we gnash our teeth about Rozsival, in the playoffs Q has generally just gone with five d. If Oduya looks like he has the past two years, which he has of late, Q will almost certainly roll out the top four we know and love and then spot Timonen and Rozsival in from there, and maybe just Timonen. That is one of the bigger cogs into the Hawks going far in the playoffs.

Tags: being paranoid because it's what we do Chicago Blackhawks Joel Quenneville Johnny Oduya Jonathan Toews