Don't Let The Doorknob Hit You 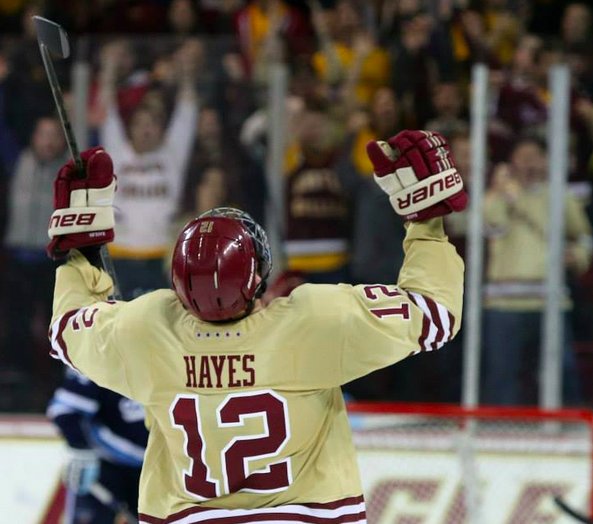 In what was an inevitable turn of events, Kevin Hayes allowed the statute of limitations or whatever on signing his entry level deal with the Blackhawks expire, and as a result is now a free agent and free to sign with any team he pleases. And that’s ok.

While there might be some wailing and gnashing of teeth over the reasons why Hayes chose to explore other options, that might mostly be due to the fact that there is next to nothing going on hockey wise right now, in this the deadest part of the now year-round NHL calendar of events. It’s ultimately immaterial whether or not that Hayes The Younger opted to not sign here due to some perceived injustice perpetrated on his family with Jimmy’s dealing, or whether he’s selfish for not wanting to wait his turn to get into the lineup. The fact of the matter is that this is a tool collectively bargained between the league and its players, and Hayes chose to use it to what he believed was an advantage in his young career. It’s one of the few tools afforded to young players before they reach the age of unrestricted free agency. And ultimately, in a society, it’s pretty fair as well, considering the average college grad is beholden to no one upon graduation and gets to choose a workplace for him or herself based on what the job market will dictate.

That’s not to say that the Hawks couldn’t have used Hayes in the future or potentially earlier. While he doesn’t quite possess the size of his California King mattress sized brother, he’s still a big kid with scoring touch, and the Hawks are still considered to be generally light in the ass among their forwards aside from Bryan Bickell. How much of Hayes’ numbers were inflated by playing with Johnny Gaudreau remains to be seen should he sign anywhere other than Calgary, but it’s not as if the Hawks are lacking playmakers to get him the puck once he gets his ass around the net. While the money might be marginally more on the open market from the accepted rookie pay scale, what Hayes clearly wants is a clear cut opportunity, which he feels is further down the road on teams not nearly as deep as the Hawks.

The Hawks aren’t totally left with a handful of themselves either, even if it’s not the best look on Stan Bowman to have yet another one of his first round picks not pan out, as he will receive a compensatory second round pick as a result, and Stan has done more with those both at the draft table and in the trade market. And if Hayes turns out to be the second coming of Cam Neely that’s just something that they’ll have to live with. But even moreso than from other amateur leagues, drafting from the NCAA is a crapshoot due to such an uneven level of competition, even for a perennial power such as BC.

So fare thee well Captain Stairwell. May your future be as bright as you’ve imagined it to be, and may you always have a pack of baby wipes on hand just in case.

– In other news, the Hawks have signed Michael Leighton to a one year deal. Yes, that Michael Leighton. Apparently the team he played for in the Ukraine in the KHL last season has folded, as there might be bigger fish to fry than hockey in that part of the world at the moment. The signing is more than likely Rockford depth, but if Antti Raanta proves to be more of what he was in the back half of the season in spelling Corey Crawford, the Hawks at least have an option with NHL experience. And they now have yet another Mike Smith (the Russian infatuated GM, not the emotive goaltender) pick back in the system, which is always a plus.